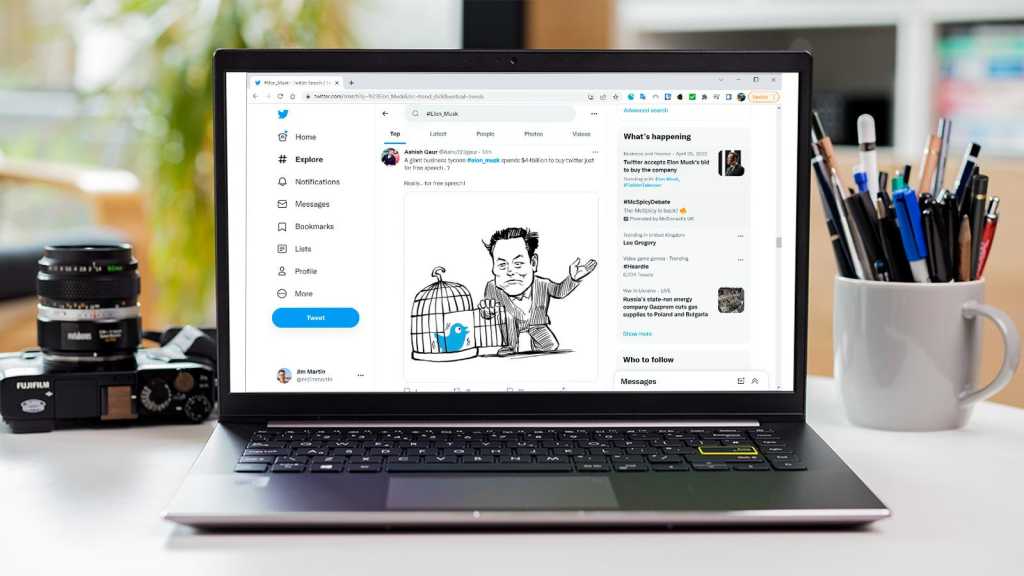 Have you ever wondered what you could do with $44bn? It’s an inconceivable amount for most people. With all that money, Elon Musk could have brought 42 million people back from the brink of starvation six times over, or contributed significantly to the fight against climate change.

But no, the richest man in the world (or at least, publicly the richest) has decided to invest 16% of his fortune in the purchase of Twitter. On 14 April, Musk submitted his offer and finally the shareholders have accepted $54.20 per share or almost 44,000 million dollars.

Those who have been following the eccentric billionaire won’t have been surprised. Just a month ago, he stated his intention to create an alternative social network. A week later, he bought 9.2% of Twitter shares and won a seat on the board of directors, a position he would resign just days later.

I have to admit I wasn’t exactly over the moon that the social network I use – indeed, that we all use – to know what’s happening in the world, would be led by a character who thinks he is God and always gets what he wants.

Nobody believes that Twitter is the purest expression of freedom of expression, if you’ll forgive the redundancy. You need only to spend a morning on the platform to witness the messages full of hate, insults and harmful comments that get posted without punishment or sanction.

The social network has a policy to curb hate speech. It worked, for example, when  Donald Trump’s account was suspended on the grounds that the former US president had used his account to encourage his supporters to storm the Capitol.

But those rules don’t always work well. Cunning users have already found a way around censorship by changing some keyword letters to similar symbols – “d3ad” instead of “dead” or “k1ll” instead of “kill”.

But it doesn’t work perfectly at the other extreme either, because sometimes Twitter also censors, even momentarily, artistic and other expressions that don’t violate any kind of human right. This was the case of an  animation by Anabel Lorente, in which she recounted several situations of harassment that women suffer and where a penis appeared.

Censorship probably wouldn’t happen on the Twitter that Elon Musk promises, but it’s a double-edged sword as Twitter’s current conduct policy is an important feature of the platform. By all accounts, Musk’s Twitter will give even more freedom to hate messages, to death threats, to the oppression of minorities.

“Free speech is the bedrock of a functioning democracy, and Twitter is the digital town square where matters vital to the future of humanity are debated,” Musk said when  the acquisition was made public.

“Given that Twitter serves as the de facto public town square, failing to adhere to free speech principles fundamentally undermines democracy,” he had already tweeted in late March before asking his audience if it was necessary to create a new platform.

But the problem, as always, is a misunderstanding of freedom of expression. Professor and analyst  Robert Reich warns of the danger of the richest owning the media, such as when Jeff Bezos bought the  Washington Post.

It’s nothing new, of course. The rich have always had a certain predilection for the media in order to protect their interests and their own freedom. Reich warns us: “What they actually seek is freedom from accountability. They want to use their vast fortunes to do whatever they please – unconstrained by laws or regulations, shareholders, or even consumers.”

In the past, Elon Musk has criticised Twitter’s algorithm for, according to him, favouring the discourse of the left. But perhaps we should start to fear that the billionaire is now going to use it to his advantage, to alter the public discourse for his own benefit.

What Elon Musk is doing is what plutocrats have been doing: using money to buy power and power to protect their money, taking control of media to rig the discourse and hedge against resentment, and branding themselves the solution to the very problem they are.— Anand Giridharadas @ The.Ink (@AnandWrites) April 25, 2022

And, although  Donald Trump has denied that he would return to Twitter, Musk’s arrival on the throne could mean the reactivation of Trump’s suspended account and all those people who, for serious reasons or not, have seen their profile removed in recent years.

To “make Twitter better”, the South African entrepreneur has also promised to “defeat spam bots and authenticate all humans”.

Bots are a serious problem on all social platforms. These fake accounts are programmed to mimic the interactions of human profiles on Twitter, such as following other users, ‘liking’ or commenting on other posts.

In part, bots are responsible for the toxic and hostile environment that, unfortunately, we find on all social networks. They contribute to hate speech and the spread of fake news and it’s a good idea for Musk to make them a top priority.

In his TED interview prior to the acquisition, the Tesla CEO said how he was going to fight them.

In this way, the platform would do business with bot accounts, but it remains to be seen if this would eliminate them forever. There’s no word on how much money would have to be deposited when creating the Twitter profile, but it should be enough to scare away the bots.

However, this deposit it unlikely to take into account the diverse socioeconomic realities of Twitter users. And – surprise – it could end up benefiting only the most privileged, for whom the $5, $20 or $50 deposit is next to nothing.

It will also be available only to those who have a bank account, which, in turn, must be associated with a real name and surname. This will make things more complicated for those who use a pseudonym in networks to protect themselves.

Being anonymous is crucial for some accounts such as those which broadcast the Arab Spring to us live at the beginning of the last decade, those users who have denounced the crimes committed in North Korea, and those from the LGBTQIA+ community who prefer to hide behind an alias for fear of reprisals.

Of course, Musk could choose to offer the possibility of paying in cryptocurrencies. Again, that’s something that isn’t available to everyone.

3. The dream of open source

The new Twitter could become open source. This has been Elon Musk’s dream for a long time. He fantasised about the idea when he first considered creating a new social network. And he has already said that he wants his Twitter to become open source now that he has bought it.

According to the tycoon, making the algorithm open source would produce greater trust. I can’t help but associate this “greater trust” with that criticism of the algorithm I was referring to earlier, which he believes is designed to favour the political left.

But beyond whether he would use that kind of source code to his advantage or not (I find it hard to imagine he wouldn’t), on paper, this revamped Twitter should favour collaboration, something that won’t be open just to developers working for the company.

That would give users greater power than they have now, but in turn that may not always be a good idea. Of course, making the algorithm public would give Twitter greater transparency as well as give an advantage to the users that can understand how it works in order gain more presence and engagement.

Many experts have pointed out the benefits of using opaque algorithms. They aren’t used to favor shadow banning, but rather to combat those who use the platform in bad faith and the spam accounts that Musk complains so much about.

Nobody can deny that Elon Musk is an avid tweeter. He seems to be aware of the topics that users are most concerned about, especially those related to improving the platform (obviously!).

It isn’t necessary to trawl through the archives to find a clear example of this. For years, Twitter users have asked the platform to add the option to edit messages. On April 4, Musk published the following survey on his profile:

Hours later, Twitter announced that they were already working on an edit button, tweeting ” no, we didn’t get the idea from a poll.” Be that as it may, I can’t argue with the effectiveness of Twitter’s new owner, even before he became the boss.

Musk has also made it his goal to improve Twitter “by enhancing the product with new features.” We don’t know what other features the billionaire has in mind, but it may be time to pitch him your ideas to see if he implements them just as quickly.

Here are my proposals:

I’ll end with one of the most impactful internal changes that could come now that Musk has taken over. Rumman Chowdhury, the company’s Director of Machine Learning Ethics, Transparency and Accountability (META), was joking (or maybe not) about it.

It would be interesting to see how he’d run a company with no employees— Rumman Chowdhury (@ruchowdh) April 11, 2022

He’s one of many Twitter employees who imagined what could happen if Musk took over: a mass exodus of staff. It’s easy to see that Musk could rub staff up the wrong way: the man who has criticised the platform’s performance so openly.

The deal won’t be finalised for another six months or so, but worries have already set in at the company’s offices. Employees used Slack channels, as reported by The Verge, to discuss the takeover, and didn’t sound very enthusiastic about the news.

Some employees could rebel against Musk’s differences of opinion, and that’s something that Twitter’s new owner of needs to deal with, respecting freedom of expression and, of course, never censoring the opinion of others as he has already been accused of doing with Tesla workers.

This article originally appeared on PCWorld in Spanish. Translation by Jim Martin.