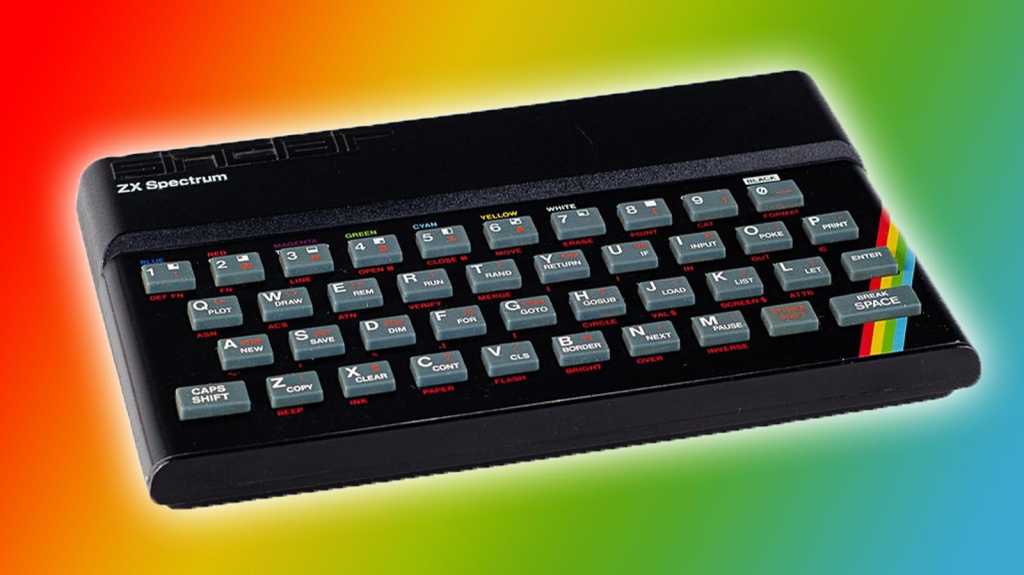 To badly paraphrase The Beatles, it was 40 years ago today, that Clive Sinclair taught the world to play. Well, technically the 40th anniversary of the ZX Spectrum was on 23 April 2022, so this will have to be a slightly belated tribute. But, such is the importance of that little metal-and-rubber wonder that I couldn’t let such a momentous occasion pass without paying my respects.

On 23 April 1982, arguably the most important computer in the history of consumer electronics was launched. Was it a high-powered PC that would revolutionise the home? Not in the slightest. Instead, it was a compact keyboard into which all the electronics were crammed beneath a rubber keyboard and a rainbow stripe on one side that backed up its name: The ZX Spectrum from Sinclair Research.

So, what was it about this unassuming device that has placed it in the pantheon of personal computers?

Perhaps more importantly, it was also affordable. Remember, this was the era when video recorders were just becoming popular, smartphones were the preserve of science fiction, and the internet was only for academic organisations and the military. PCs were expensive and aimed at home office productivity, and games consoles hadn’t yet taken hold: the Atari 2600 wouldn’t debut for another seven months.

The home computer market was in its infancy and, after dipping its toes in the waters with the monochrome ZX81, Sinclair had brought colour to this emerging market with the introduction of the ZX Spectrum. The world would never be the same again.

For most British kids, this would be their first introduction to the world of computing, but it also appealed to more grown-up users that saw a potential for creating games or playing them on their TVs. Where other computers were trying to sell themselves as educational tools so parents would buy them for their children, the Spectrum quickly became a gaming sensation. It made computers cool and sparked an interest that soon took the country by storm.

I was ten years old when I got my Spectrum. I’d been badgering my mum for months to get a ZX81, as we didn’t really have a lot of money and the Spectrum was the more expensive model: £125 for the model with 16K of RAM and £175 for the 48K version. Today, those prices would be around £470 and £650! But, when my birthday rolled around, the decade was marked by feverish excitement as I unwrapped one of the most significant gifts I would ever receive. There it was. Sinclair’s finest.

From the first time I plugged it in, typed Load “Psion Flight”, pressed play on the tape recorder (and heard the high-pitched sounds that accompanied the blue and yellow moving bars that framed the loading screen) I was obsessed. My love affair with technology had begun.

Every spare minute of the next few years would be lost in the frantic worlds of Lunar Jetman, Attic Atac, and Sabre Wulf. Explore the mysterious lands of Tir Na Nog, The Lords of Midnight, and Avalon. I would take my team to the top of the table either as a player (Match Day) or coach (Football Manager). Plus, there were the text-based adventures that side-stepped the technical limitations of the Spectrum and opened up huge interactive stories through titles like The Hobbit, Lords of Time, and Colossal Adventure.

But, alongside the many, many hours of playing, there was also the programming. I’m sure you’ll remember it just as fondly as I do: copying pages of code out of the monthly magazines that soon appeared, such as Sinclair User, and then trying to figure out where you mistyped and caused the game to crash (or never load in the first place).

I even bought the Cheetah SpecDrum drum synthesizer and sequencer and created a fair few beats. You see, the ZX Spectrum wasn’t the closed world that we often see in technology these days. Instead, it encouraged you to create content. Software like The Quill helped you write text-based adventures, which you could then sell via mail order to other Spectrum owners.

Many of the initial hit titles on the platform came from small start-ups or individuals working in their bedrooms after finishing their day jobs. Companies you’ll remember such as Mastertronics appeared selling basic games for £1.99 (around £7.50 in today’s money), and magazines including Crash were born with a do-it-yourself, punk rock attitude that marked the very ethos of the Spectrum.

Tips would appear in the magazines – the first game guides – which explained how to get past difficult sections, while others showed you which two keys to bash to speed up Daley Thompson in his Decathlon events. (My favourite trick for this was to place a golf ball in between the rubber buttons, then quickly roll it left and right.)

Myths and legends began, with people sending in supposed screenshots of a raft appearing next to a boat in Jet Set Willy which was there only at a specific time and which would take you to an undiscovered part of the game. I waited. It never came. :sadface:

There was also the fierce rivalry with the American nemesis that was the Commodore 64. School playgrounds were split into Commodore or Spectrum gangs that would slag each other off (it was non-violent, mostly), while secretly passing copied tapes of the latest games among their tribe.

Computers had left the mainframe era and moved completely into the mainstream culture.

But why was the ZX Spectrum one of the most important computers in history? It’s because it made computers and technology accessible to the masses, as well as inspiring its users to all the possibilities they could achieve with it.

The Spectrum fostered an entrepreneurial spirit at a time when the UK and Europe were going through some tough times. Plus, like its name, it brought some colour into the world. Over its lifetime, including the subsequent and less successful ZX Spectrum+ and +2, the little computer that could ended up selling over five million units and is widely regarded as the device that popularised computing in the UK and across Europe.

Personally, it made me passionate about technology as well as starting my interest in print media, mainly due to Crash. Without that small black box with the stripes on the side, I wouldn’t have spent nearly twenty years writing about technology, gaming and music.

You can still enjoy Spectrum games online, via emulators on sites such as World of Spectrum, which is a great place to revisit where it all began.