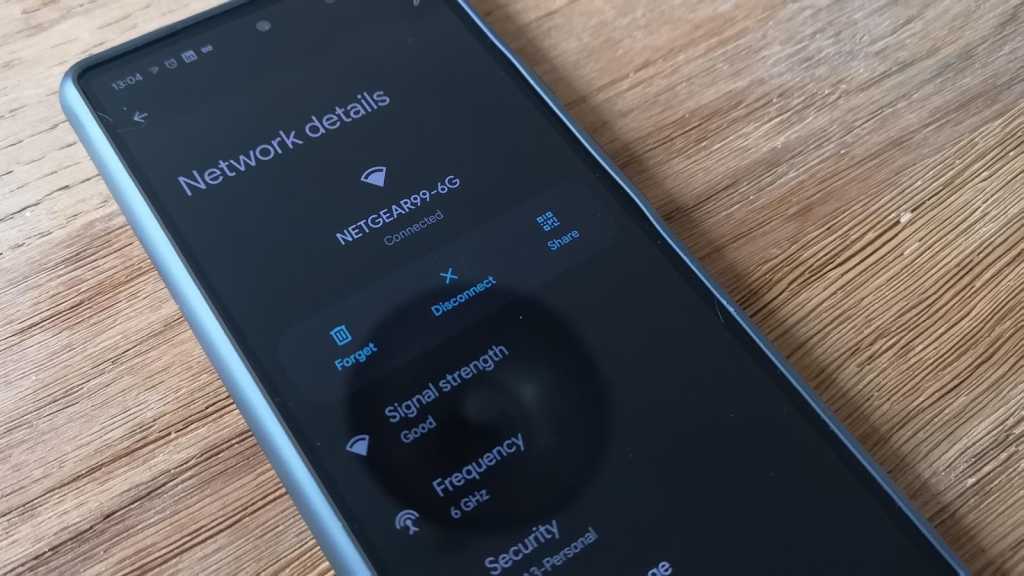 Chances are, you haven’t yet upgraded your router to a Wi-Fi 6 model, but already there are newer, faster options. Right now, Wi-Fi 6E routers and mesh Wi-Fi systems are beginning to appear and there’s already talk of Wi-Fi 7, even if actual devices are a year or two away.

Promising even better performance than Wi-Fi 6, the clumsily named 6E standard is the first to use a brand new frequency: 6GHz. The frequency isn’t new, of course, but it’s the first time consumer devices have been able to use it.

Along with routers, there are also Wi-Fi 6E-compatible phones such as the Google Pixel 6 and Samsung Galaxy S22 Plus. Soon, you’ll be able to buy laptops and other devices with built-in Wi-Fi 6E and, presumably, USB dongles and add-in cards so you can upgrade older PCs and laptops to the new standard.

If you’re in the market for a new router or mesh Wi-Fi system, you may well be tempted to skip Wi-Fi 6 and jump straight to Wi-Fi 6E. And if your mobile phone contract is up for renewal, you might be thinking of getting a new phone with Wi-Fi 6E so you have a device that can benefit from the latest technology.

In fact, it’s worth pausing to say that you will need both a router or mesh Wi-Fi kit and a phone, laptop or some other device that supports Wi-Fi 6E. Otherwise it’s impossible to take advantage of that new 6GHz band. If you just have the router or the phone, it will fall back to Wi-Fi 5 or even an earlier standard and use the existing 5GHz or 2.4GHz networks.

While phones and laptops equipped with Wi-Fi 6E aren’t really any more expensive than those with older versions, the same cannot be said for routers and mesh systems. If you haven’t already had a look at their prices, you’ll be shocked at how much they are.

To find out if that cost is worth paying, we took some Wi-Fi 6E routers – the Asus ZenWiFi Pro ET12 and Netgear Nighthawk RAXE500, pictured below – for a test drive to see what all the fuss is about.

What is Wi-Fi 6E anyway?

Previously, Wi-Fi devices have been able to send and receive data on two radio frequency bands – 2.4GHz and 5GHz.  That’s been the case ever since the Wi-Fi 4 standard (aka 802.11n) was finalised back in 2009.

This was a big leap forwards for home networking as, prior to that, Wi-Fi devices only used the 2.4GHz band. Being able to tap into the higher frequency 5GHz band meant that we could not only enjoy faster speeds, but because newer devices started using the newly available (and therefore empty) band, the older 2.4GHz band became less congested at the same time. The result was a general improvement in speed all round.

Now with Wi-Fi 6E (aka 802.11ax) this is set to happen again, with compatible devices communicating over even higher frequencies, namely the 6GHz band.

As before, with so few devices using these frequencies, there’s little congestion in the airwaves, meaning excellent performance and reliable connections.

Now, the trade-off of moving to ever-higher frequencies is shorter ranges. That’s because shorter wavelengths have a tougher time passing through obstacles such as concrete walls than longer ones. There’s a lot more to it than that, but we’re not here for a physics lesson.

The point is, 6GHz Wi-Fi will be fantastic when the device is close to the router, but the signal won’t cover as much distance as a 5GHz or 2.4GHz signal. To be fair, there isn’t much difference between 5GHz and 6GHz in that respect.

Which Wi-Fi 6E devices are available to buy now?

At the time of writing there were relatively few Wi-Fi 6E routers available to buy, but phones with Wi-Fi 6E were already available, and new laptops were either available or going on sale very soon.

There are a few Wi-Fi 6E-compliant routers and mesh Wi-Fi systems available now as well:

Note: the Linksys Hydra Pro Wi-Fi 6E and the Netgear Nighthawk RAXE300 are not yet available to buy in the UK.

While prices and launch dates are still to be confirmed, the TP-Link Archer AXE300 router and the TP-Link Deco XE200 mesh Wi-Fi system are expected to go on sale at towards the latter half of the year.

Eventually there will be greater choice and, as you might expect, prices will fall. For example, consider the Netgear Nighthawk AX4, a standalone Wi-Fi 6 router, which cost £180/$200 back in 2019. Less than a year later, devices like the Honor Router 3 cost less than half at £80/$99.

This isn’t to say all Wi-Fi 6 devices offer the same performance: that’s not true at all. You’ll still pay a premium if you want the best possible performance because, for one thing, to go faster you need more transmitters and receivers. This is why you’ll see specs such as 2×2, 3×3 and 4×4.

To see what Wi-Fi 6E devices were actually capable of, we ran a series of quick speed tests in a two-up, two-down home in South London using a Google Pixel 6 and the WiFi Speed Test Pro app on both a Netgear Nighthawk RAXE500 router and the Asus ZenWiFi Pro ET12 mesh Wi-Fi system.

Both devices feature four-stream MU-MIMO support and 4×4 transmitters and receivers on the 2.4GHz, 5GHz, and 6GHz bands, and so should be comparable in terms of performance.

For some context, the same tests were run using a Wi-Fi 6 router (a Netgear Orbi RBK750) and a Wi-Fi 5 router (a Virgin Media Super Hub 3), ensuring the 5GHz band was used.

With the phone two metres from the router, here are the results (which are averages of multiple tests, rounded up to the nearest megabit per second):

As with 5GHz, speeds over short distances are fantastic, but over longer distances, it’s a different story. Connections 5 metres away behind a thin, non-load-bearing wall were decent on both the Netgear Nighthawk AXE11000 (806.9Mbps) and the Asus ZenWiFi Pro ET12 (696.38Mbps). Those speeds are what we’d expect when one or two metres away from most Wi-Fi 6 access points, so this is a big plus.

However, performance 15 metres away and one floor up from the routers was not so rosy. Results were an average of 35.99Mbps and 30.62Mbps, respectively.

It wasn’t possible to get results out in the garden on the 6GHz band – roughly 20 metres away, with two closed doors and two walls in the way – because the connection would drop every time, or the test would fail mid-way through. So while 6GHz connections are fast, they lack reach. No surprises there.

In fact, 5GHz routers suffer from the same limited coverage: see our reviews of the D-Link DIR-X1560 and the Linksys MR7350 for more.

Should you buy a Wi-Fi 6E router?

Whether or not you should invest in Wi-Fi 6E depends greatly on the answers to four questions.

One, what are you upgrading from? Two, do you have any Wi-Fi 6E devices already, or will you be acquiring any in the near future? Three, what’s your broadband speed? Four – and perhaps most importantly – what’s your budget?

If you’ve got an older Wi-Fi 5 (802.11ac) router, then you might be tempted. But unless you have a very fast broadband connection (gigabit full fibre, basically) then it’s hard to think of a reason why you’d need such fast Wi-Fi speeds.

Based on the speed tests, the benefits of Wi-Fi 6E are obvious. But you’ll see these benefits only if you have a laptop or phone with Wi-Fi 6E. If you don’t, or you won’t be getting any new devices for a while, then you should hold off for a bit until prices come down. Or opt for Wi-Fi 6, or wait for Wi-Fi 7.

Is it worth waiting to see if your ISP will supply a Wi-Fi 6E router, hopefully for free? Yes, but you could be in for a long wait.

BT is due to launch its latest Smart Hub this year, but this will support Wi-Fi 6, not Wi-Fi 6E. Likewise, Virgin Media’s recent Hub 5 is a Wi-Fi 6 device. A hypothetical Hub 6 hasn’t even been confirmed yet.

Kalam Meah, ISP Director at TP-Link UK, which works with a number of ISPs including BT and Gigaclear, said that Wi-Fi 6E will likely be the norm for most homes in the next couple of years.

“We are introducing Wi-Fi 6E later on this year, and then what I see is that becoming more mainstream towards the end of 2023, beginning of 2024… Wi-Fi 6E will be very much for the next two years be a premium proposition.”

It’ll be a while yet before your ISP offers you a Wi-Fi 6E device, but this means that such hardware should (theoretically) arrive in tandem with gigabit internet services becoming more widely available. You could jump the gun and get something today that’ll future-proof your home, or you could wait to see how things develop over the next few months.

Bear in mind that there are still plenty of telephone exchanges where FTTP (full fibre) isn’t available via Openreach, and other parts of the UK which aren’t passed by other providers like Virgin Media, Hyperoptic, CityFibre and Gigaclear, so your choice will also depend on what’s available in your postcode.