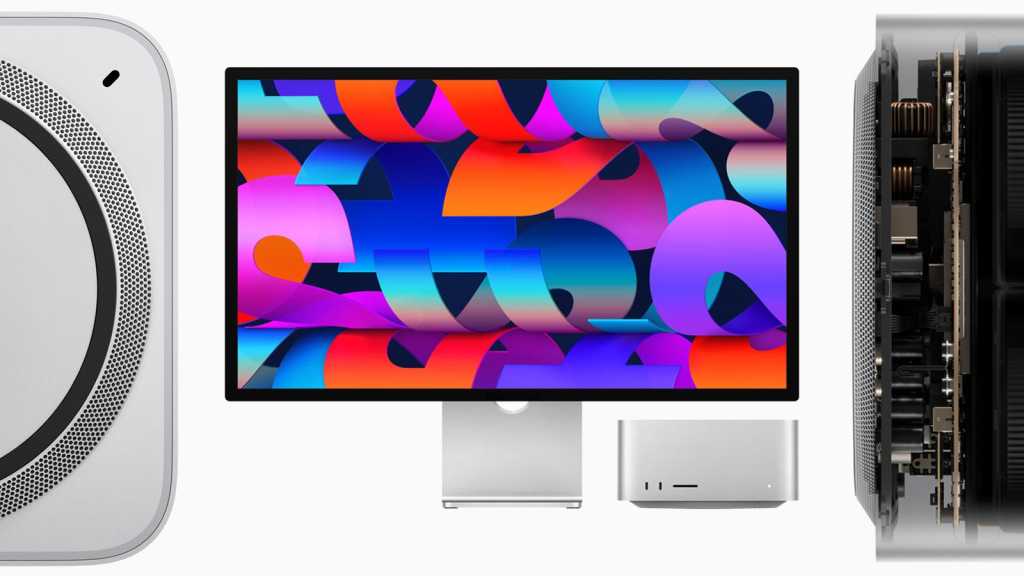 Apple’s 8 March ‘Peek Performance’ event may have given us new iPhone and iPad colours and models but the name was clearly in reference to the new M1 Ultra chipset that the company revealed, alongside the first machine to showcase this new top-tier Apple silicon, the Mac Studio.

Boasting faster CPU performance than even the top-tier 28-core Mac Pro, the Mac Studio is a deceptively small machine that blends the compact desktop computing experience offered up by the Mac Mini and incorporates some of the most impressive performance from a machine in the series to date.

When does the Mac Studio go on sale?

Apple not only unveiled the Mac Studio and Studio Display at its 8 March ‘Peek Performance’ event, it made both products available to pre-order on the same day. The date you can actually buy one is 18 March.

How much is the Mac Studio?

Apple introduced two main variants of the Mac Studio: one powered by its M1 Max chipset, while the other sports the newly-unveiled M1 Ultra.

How much is the Studio Display?

If you want to pair your new Mac Studio with the fresh-faced 5K Studio Display, pricing starts at £1,499/ $1,599 for the base model with a tilting head (or a VESA mount adapter) and standard anti-reflective coating on the screen.

Upgrading to even lower-reflectivity ‘nano-texture’ glass (as first seen on the company’s Pro Display XDR) will set you back an additional £250/$300, while moving from the tilt stand or VESA mount adapter to the tilt and height-adjustable stand costs an extra £400/$400.

What features does the Mac Studio offer?

The reveal of the Mac Studio arrived off the back of the introduction of the company’s new top-tier M1 Ultra silicon: a new class of chipset that surpasses even the M1 Max, introduced last year.

Extruded from a single block of aluminium, the Mac Studio resembles a tall Mac Mini, with a 19.7cm/7.7in square footprint and a height of 9.5cm/3.7in, which Apple says if designed specifically to “fit under most displays.”

Dual fans pull cool air in from the grille surrounding the Studio’s base, over a custom circular PSU, and out through a “low-impedance” rear exhaust, positioned above the machine’s ports on the back. As for fan noise, Apple claims that “for most workloads, you barely even hear it,” although it didn’t quote specific values during the March keynote.

As for I/O, a centrally positioned power socket on the back is accompanied by four Thunderbolt 4 ports, a 10Gb Ethernet port, two USB-A ports, an HDMI port, a 3.5mm “Pro” audio jack, “for high impedance headphones or external amplified speakers,” along with WiFi 6 and Bluetooth 5.0.

Depending on whether you opt for the M1 Max or M1 Ultra model, the two front-mounted USB-C ports support either USB 3.0 or Thunderbolt 4 (offering 10Gb/s or 40Gb/s, respectively), alongside a SDXC (UHS-II) card reader, either way.

Obviously, the whole hook of the Mac Studio is that it’s an impressively small form factor machine, while still delivering outstanding performance; most clearly demonstrated by the new M1 Ultra. But what is Apple’s new chip all about and how is performance relative to the already-capable M1 Max, which launched last year?

In the context of the Mac Studio, Apple made numerous compute and graphical performance comparisons to frame just how much more capable the various SKUs of its latest machine are, relative to its other high-end desktop offerings.

At a glance, the M1 Ultra looks like two M1 Max chips stuck together, and that’s kind of what it is. Sporting a 20-core CPU and up to a 64-core GPU, 32 neural engine cores and double the media engine of M1 Max, it can facilitate up to 18 streams of 8K ProRes 422 video, according to Apple.

Bound with what Apple has dubbed ‘UltraFusion’ architecture, this inter-die connectivity solution delivers a claimed 2.5TB/s of interprocessor bandwidth, which is “more than four times the bandwidth of the leading multichip interconnect technology,” according to the company’s Johny Srouji.

The expanded 800GB/s memory bandwidth also means the M1 Ultra-powered Mac Studios can leverage up to 128GB of unified memory.

A new Mac wasn’t the only addition to sport the Studio suffix at its March event, with Apple pairing its latest machine with a new display, as well.

Along with the assortment of optional mounts and anti-reflective treatments mentioned earlier, the Studio Display offers up a 27in 5K Retina display, with support for the P3 wide colour gamut, while offering up to 600nits brightness.

Thanks to the integration of Apple’s A13 Bionic chip the Studio Display’s12Mp 122° ultrawide camera supports Centre Stage, meaning it can track a subject in-frame during video calls. What’s more, a high fidelity six-speaker setup – comprised of four force-cancelling woofers and two tweeters – delivers Spatial Audio, while a three-microphone array allows for clear voice capture and even “Hey Siri” support.

Concerning I/O, the Studio Display includes three USB-C ports, with up to 10Gb/s throughput, as well as a single Thunderbolt 3 port, letting users connect peripherals to their Mac with a single cable. Support for 96W power output through the Thunderbolt port also allows for the charging of external devices; even a 14in MacBook Pro.

Curious to find out more about everything else Apple showcased at its March ‘Peek Performance’ event? Check out our features on the new iPad Air 5 and iPhone SE 3, Dominic Preston’s opinion piece on Why Apple Fans Deserve Better and episode 105 of our weekly podcast Fast Charge, where we break down the entire keynote.

As for the Apple wares that didn’t receive an update during the keynote, we’ve rounded up the latest leaks and rumours regarding the likes of a 2022 Mac Pro, iMac, MacBooks and more.