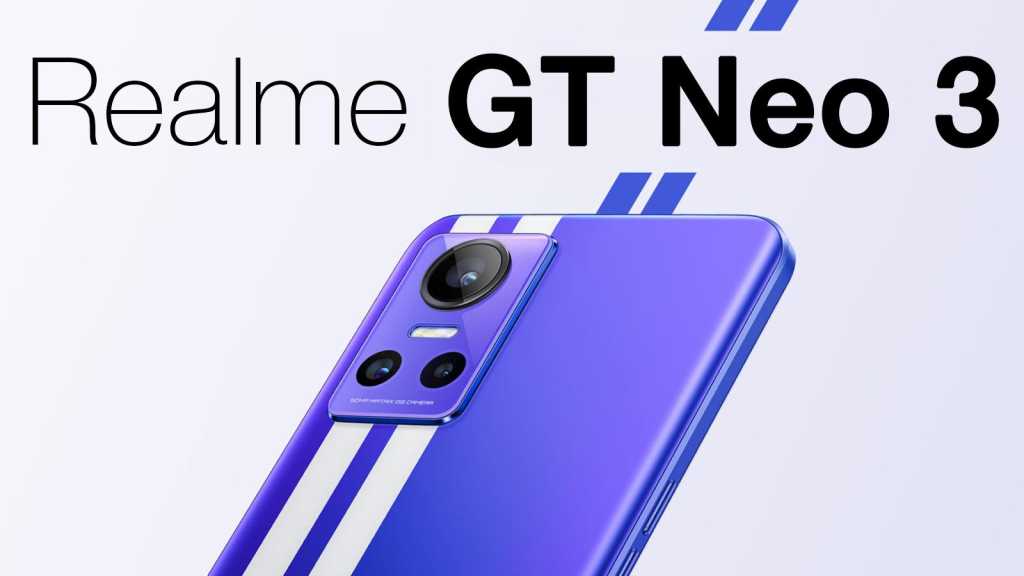 The hotly anticipated Realme GT Neo 3 has made its Indian debut, serving as the first example of a phone boasting impressively fast 150W fast charging on the market.

Initially teased at the international launch of the company’s GT 2 series flagship phones during MWC 2022, Realme was keen to shout about the Neo 3’s headline feature but didn’t reveal much else, seeding tidbits about its design and additional hardware over subsequent weeks.

A few weeks later, however, the phone is here in all its glory, filling in the picture that Realme initially started to paint in February. Here’s all you need to know about the Realme GT Neo 3.

When does the Realme GT Neo 3 go on sale?

Realme launched the GT Neo 3 in China on 22 March, following that up with an Indian launch on 29 April – where the phone is now on sale.

As for Europe, Realme has now confirmed that the phone will launch on 8 June alongside the so-far unannounced GT Neo 3T. That’s actually earlier than expected, as the brand had previously promised a European launch “in the first half of H2.”

How much is the Realme GT Neo 3?

Now that the GT Neo 3 has launched in India we have a better idea of its global pricing, with not one but two variants of the GT Neo 3: one with that headline 150W charging and another with comparatively modest 80W charging (and a larger 5000mAh battery). There’s also a China-only model that goes all the way up to 512GB of storage.

What are the Realme GT Neo 3 specs?

The GT Neo 3’s headline feature may be its 150W charging, but there’s a lot more to the phone than that.

The phone is powered by MediaTek’s newly-unveiled Dimensity 8100 chipset. While the Dimensity 9000 is MediaTek’s answer to the likes of the top-tier Snapdragon 8 Gen 1, the 8000 series (currently consisting of the Dimensity 8000 and 8100) operates on a fractionally larger 5nm die with an octa-core configuration comprised of four Cortex-A78 big cores and four Cortex-A55 small cores, accompanied by a Mali-G610 MC6, which relies on ARM’s latest GPU architecture.

Between the two, the Dimensity 8100 supports higher CPU and GPU frequencies, compared to the standard 8000, while the series as a whole also offers support for WiFi 6E and Bluetooth 5.3 standard.

The phone’s colours borrow from the automotive inspiration that the series gets its namesake from, with racing stripes running down the sides. While for the Chinese launch these are named specifically after Le Mans and Silverstone, for India they’re dubbed Sprint White and Nitro Blue, and are joined by the plainer Asphalt Black.

The display is a 120Hz AMOLED with a Full HD+ resolution, and at 6.7in it’s a fairly sizeable screen. There’s also a secondary chipset supporting the Dimensity 8100, or more specifically, its Mali-G610 MC6 GPU, to ensure a consistent 120 frames per second when gaming and, in some scenarios, improved power efficiency.

This feature, which is seemingly independent of the phone’s GT Mode 3.0, has been optimised to work with select games (more than 20 at launch) and, as spotted by GSMArena, the GT Neo 3 is also the official phone for the Honor of Kings national competition in China.

As for photography, it would appear that the GT Neo 3 relies on the exact same camera setup found on the standard Realme GT 2, led by the popular 50Mp Sony IMX766 sensor used by Realme, OnePlus, Oppo and beyond.

Then there’s the battery and charging. That all-important 150W ‘UltraDart’ fast charging is tied to a dual cell 4500mAh battery, which Realme boasts is rated to last 1600 charge cycles with 80% battery health intact, well above the industry standard and particularly impressive for a phone that charges so quickly.

There’s also a second, cheaper version of the phone with comparatively slower 80W wired charging, but this does benefit from a larger 5000mAh cell.

In the lead-up to the GT Neo 3’s unveiling, a leaked TENAA listing highlighted the existence of two versions of the GT Neo 3, with one (the RMX3562) cited as sporting a larger capacity battery than the standard Neo 3.

At the time this other model was dubbed the ‘GT Neo 3 Flash’ but has since made it to market as simply another SKU of the standard GT Neo 3, the one that sports 80W charging and a larger 5000mAh battery.

While the Flash may never materialise as its own model, we know there will be a GT Neo 3T, as Realme has begun teasing the phone for a global release.

The official poster reveals a corner punch-hole selfie camera, and the company has also confirmed that it will include 80W wired charging and a Snapdragon 870 chip.

A Geekbench listing also reveals it will ship with Android 12 and 8GB of RAM. while other reports suggest that it will have a 6.5in AMOLED display, and a 64Mp main rear camera and a 16Mp selfie snapper.

As new details regarding the GT Neo 3 and 3T emerge, including the promised European launch, we’ll be updating this article regularly. So check back often for the latest updates.