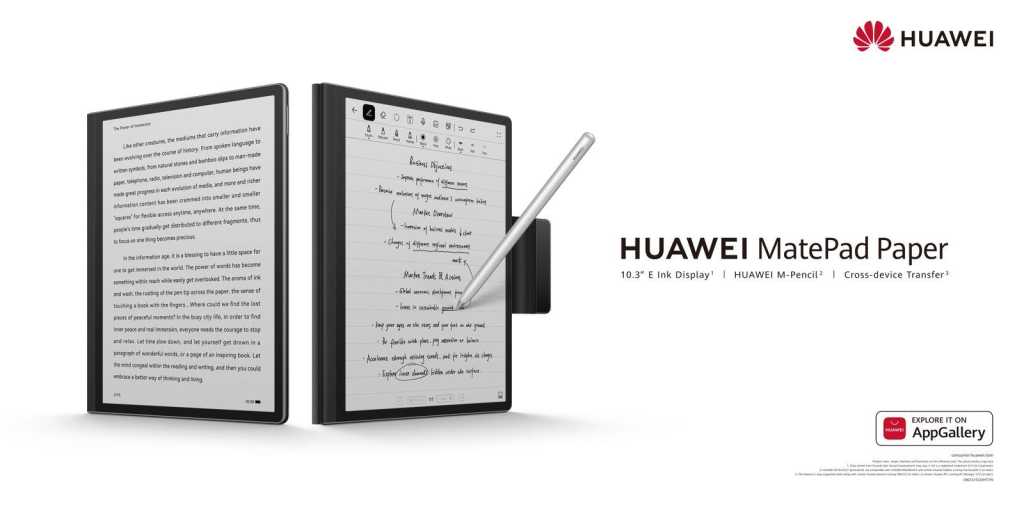 Huawei has announced a pair of tablets at MWC 2022, but one of them probably isn’t what you were expecting.

The MatePad Paper is a 10.3in tablet with an e-ink screen, meaning it’s only able to display content in black and white.

Despite this, the device is much more capable than your average Kindle or Kobo. It runs HarmonyOS, Huawei’s answer to Android. While the selection of apps is far more limited than the Google Play Store, it offers functionality you usually wouldn’t associate with e-ink devices.

That includes taking handwritten notes, as the MatePad Paper is fully compatible with Huawei’s M-Pencil stylus. With 4096 levels of pressure sensitivity and just 26ms latency, it’s designed to accurately simulate the experience of pen on paper.

The beauty of a full mobile OS means this can quickly be converted to text and shared via email, while document signing couldn’t be easier. It’s also large enough to comfortably take notes and read text at the same time using split-screen.

As is usually the case with e-readers, Huawei hasn’t revealed the resolution of the MatePad Paper’s 10.3in display. We do know it’s a reflective screen with an anti-glare solution and 32 levels of brightness, so it should be readable both at night and in bright lighting environments. There’s also a built-in smart refresh rate, which automatically adjusts to help conserve battery life.

That shouldn’t be too much of an issue, though. Huawei says it’ll last four weeks on standby – regular usage will likely deplete it significantly faster, but you still won’t have to charge it very often. However, Huawei hasn’t quoted any specific charging speeds.

The company also hasn’t revealed the processor powering the MatePad Paper, although it does have 4GB of RAM and 64GB of internal storage. Other features we do know include a generous 86.3% screen-to-body ratio, fingerprint sensor built into the power button and a total weight of 360g.

We don’t know exactly which countries the MatePad Paper will go on sale in, but we do know that it will cost just €499 (around $560/£420) – which includes both the M-Pencil and a Folio Cover case for the device.

If you’d prefer a tablet experience in full colour, Huawei also has you covered. The latest MateBook E has launched globally at MWC, after previously being exclusive to China.

It runs Windows 11 instead of HarmonyOS, on a 12.6in, 2560×1600 touchscreen. This is also the first Huawei computer to have an OLED display, although the form factor means it’s more likely to be compared to the Surface Pro 8.

That’s thanks to the detachable Smart Magnetic Keyboard that’s included in the box. It offers a full-size keyboard with 1.3mm of key travel, alongside a trackpad and support for two viewing angles: 110° and 160°.

A 42Wh battery sounds on the small side, so it remains to be seen how this holds out. You do at least get 65W fast charging, alongside a wide range of ports and two cameras (8Mp front, 13Mp rear).

Alongside the two tablets, Huawei unveiled an updated version of its MateBook X Pro laptop – which just might be the perfect laptop.