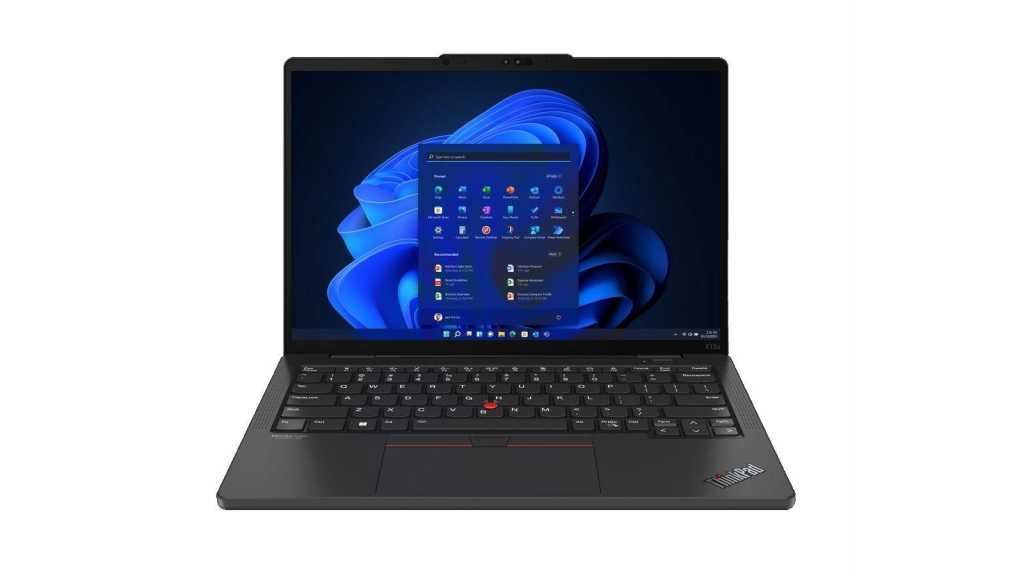 Qualcomm says its latest chip delivers big performance improvements over the previous generation, without compromising 5G connectivity or great battery life. It combines with the company’s Adreno GPU here, alongside up to 32GB of RAM and a maximum 1TB of SSD storage – so performance shouldn’t be an issue.

These internals help power a 13.3in LCD display, at a resolution of 1920×1200. That gives it the now-common 16:10 aspect ratio, although low-power and low-blue light panels are only available on some configurations. Display is usually a key strength of ThinkPad devices, so don’t expect that to be any different here.

The design of the X13s is consistent with what we’ve seen from ThinkPad laptops before. It’s a traditional clamshell device, complete with matte black finish and bright red TrackPoint in the centre of the keyboard.

However, one key exception is a top bezel which protrudes slightly in the middle. This is where you’ll find a 5Mp webcam which is capable of 1080p video. There’s also 5Mp IR camera, which means the ThinkPad X13s is compatible with Windows Hello. If you’re not a fan of face unlock, there is a separate fingerprint sensor.

On battery life, Lenovo says the 49.5Wh cell in the ThinkPad X13s can last for up to 28 hours of video playback. That’s simply a measure of screen-on time, though – real-world usage is likely to deplete the battery more quickly. However, even half of that (14 hours) would comfortably last a full working day.

For a device that’s only 13.4mm thick, it’s probably no surprise that ports are very limited. Alongside a 3.5mm headphone jack and SIM tray, you only get two USB-C ports. At least both can be used for charging.

Other features of note specifically have business users in mind, including Windows 11 Pro out of the box and Lenovo’s ThinkShield security platform.

The ThinkPad X13s will be available sometime in May 2022, starting at US$1,099. That roughly translates to £823, but pricing and availability outside the US is yet to be revealed.

It’s just one of a wide range of new ThinkPad devices being announced at MWC 2022. Most are minor refreshes to existing products, such as the ThinkPad X1 Extreme Gen5 and various new ThinkPad T series laptops. The ThinkPad P16s is new, although it’s essentially a 16in version of the existing ThinkPad 14s.

All will be available sometime between April and June, with US prices ranging from $1,299 to $2,049. Again, it’s not clear when they’ll be released elsewhere or how much they’ll cost.

We can confidently say the new ThinkPad devices will be contenders for our best business laptop chart. That may extend to consumers in the case of the X13s, but Snapdragon-powered laptops remain far less popular than their Intel or AMD equivalents.

Outside of ThinkPads, Lenovo has also launched multiple new tablets, including the 3rd generation of the Tab M10 Plus – which is an early contender for the year’s best budget Android tablet.