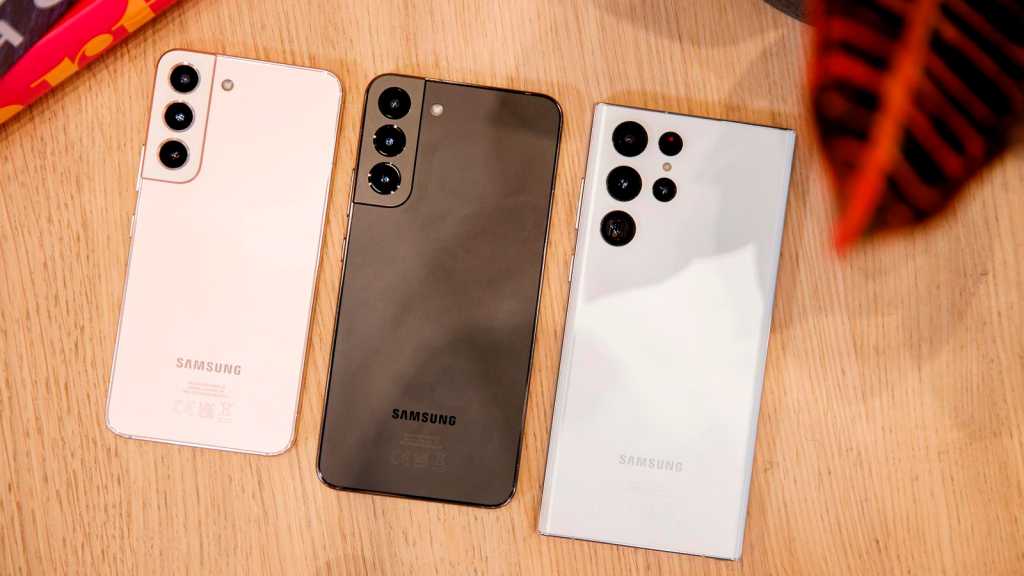 Samsung has come out swinging with updates to its flagship smartphone and tablet line-ups as it unveils the new Galaxy S22 and Galaxy Tab S8 series.

Each features three new entries, with some conservative – but impressive – regular models joined by souped up Ultra versions that not only shake up the specs, but also make some perhaps controversial feature and design choices.

Unveiled at today’s Galaxy Unpacked event, the Galaxy S22 series is dominated by the S22 Ultra. Once rumoured to actually be called the S22 Note, this phone sees Samsung look backwards to its other flagship series – last seen a year and a half ago in the Galaxy Note 20 – by not only incorporating an S-Pen stylus that slots into the phone, but also borrowing those phones’ rough design, with rounded sides and straight-edged top and bottom.

As unexpected as the design is, the Ultra’s specs won’t shock too much. The phone is powered by either the Snapdragon 8 Gen 1 or Samsung’s own Exynos 2200 chipset (varying by region, with the former in the US, and the latter in Europe) and comes with up to 1TB storage and 12GB RAM – though the starting RAM of 8GB does seem a little stingy.

The big draw of course is the camera. You’ll find four lenses on the back of the phone: a main camera, an ultra-wide, and two telephoto lenses at 3x and 10x optical zoom. That’s essentially the same setup found on last year’s S21 Ultra, and the specific specs are similar again too.

Samsung has used a new and improved sensor for the 108Mp main shooter though, while algorithmic tweaks should improve performance across the lenses, especially in low light and at high zoom levels.

The Ultra is joined by the Galaxy S22 and S22+, but to look at them you wouldn’t guess they were part of the same range. These phones haven’t had the same bottom-up redesign, and instead, look similar to last year’s S21 range – and indeed the more recent S21 FE, which only launched last month.

They’re powered by the same processors as the Ultra, but have simpler camera setups – though with new 50Mp main sensors and 3x optical zoom telephoto lenses, these phones have arguably seen the bigger year-on-year leap in photography. A return to a glass body, after a couple of years of cost-cutting with plastic, is also certain to win fans over.

Then there are the tablets. The Tab S8 Ultra doesn’t bear as obvious as inspiration as the S22 Ultra, but it’s no less radical. With a 14.6in display in a 16:10 aspect ratio, the S8 Ultra is not only enormous, but it’s wide. This is probably the best tablet in the world for watching TV and films on, but it’s so powerful and expensive that it’s hard to imagine buying one just for streaming Netflix in bed.

With the Snapdragon 8 Gen 1, up to 16GB of RAM, and a WQXGA+ resolution, this is likely targeted at creatives and intended to rival Apple’s largest 12.9in iPad Pro – after all, if that’s big, this is bigger. The question is whether the odd form factor – not to mention notched selfie cameras interrupting the screen – will win artists over or put them off.

As with the phones, the regular Tab S8 and Tab S8+ are a little more pedestrian by comparison. With 11in and 12.4in displays these are still both pretty big tablets, and powerful, but come in a more typical form factor and without the notched display.

Like the Ultra, both include an S Pen stylus out of the box, and feature big batteries with fast charging. The main performance drop is that the two cap out at 8GB of RAM.

All of the S22 phones and Tab S8 tablets ship with Android 12, and Samsung is offering “up to four years” of Android version updates and a fifth year of security updates for all the new products – plus the Z Fold 3, Z Flip 3, and S21 series. This is even longer support than Google guarantees for its Pixel 6 flagships, making it easily the best you’ll find from an Android device.