Many people assume that the ability to create documents, spreadsheets and presentations is built into Windows, Android and other operating systems.

But that’s not the case, unless you count Windows WordPad – a very basic word processor. And that won’t help you with spreadsheets or presentations.

What you need is some office software. Microsoft Office might be the best-known suite, but there are alternative choices which can cost you significantly less: even free!

For example, you can use OnlyOffice for free.

And that’s the first reason to give it a try: it won’t cost you anything. 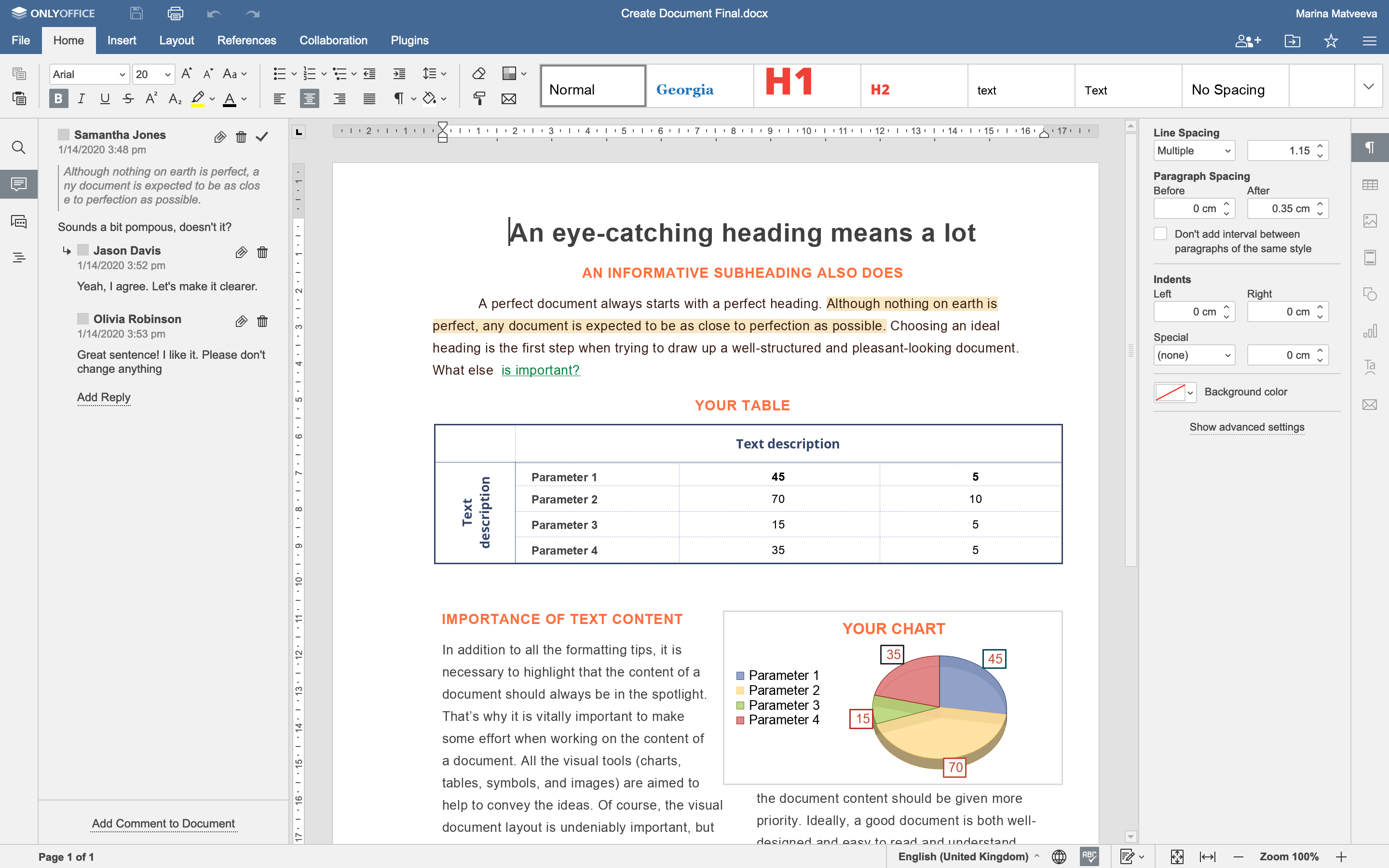 In fact, because OnlyOffice opens files in tabs – just like web pages in a browser – it’s even easier to switch between, say, a spreadsheet and a presentation. Everything is contained in a single app instead of having one app for each type of document as you have with Word, Excel and PowerPoint.

That isn’t the third reason to use OnlyOffice, though. No, that reason is collaboration. Only Office was built from the ground up to be used by teams where multiple people work simultaneously on a document.

This makes it an ideal choice for any business looking for an affordable online office suite. The word online is an important distinction here, because we’re talking about OnlyOffice Docs here. That means you access it via a web browser, just like Google Docs or Microsoft Office Online, rather than using the desktop apps for Windows, macOS or Linux.

All you need to do if you want to collaborate is to choose which cloud service to use, from OnlyOffice’s own service (which provides 2GB of free storage per user) to Nextcloud, ownCloud, Seafile, Liferay, or kDrive.

It’s worth noting that even the free cloud version, which is called OnlyOffice Community Edition, which is a free server version, allows up to 20 people to collaborate on documents with edits appearing either in real-time or after each contributor has saved their changes.

Teams can also chat with each other in OnlyOffice, as well as add comments to documents and tack the changes that they and others have made. The only real limitations beyond the number of users is that the Community Edition doesn’t include access to the OnlyOffice mobile web editors and if you need support, you’ll need to use the online knowledgebase.

You can now get OnlyOffice apps on Android and iOS, and version 7 includes some great new features which are available in the mobile, desktop and web apps.

One of these is fillable forms. With this new tool, you can create a form that others can fill out online, or in their own office software. Note that forms can’t be created in the mobile app, but they can be filled out.

When putting together a form you can use text fields, include tick boxes, drop-down menus and more. Whatever information you need to collect, it’s now possible in OnlyOffice.

There’s also the new option to switch between light and dark modes in the desktop app, with dark being far easier on the eyes when you’re working after sunset or simply in a dimly lit environment.

You can download OnlyOffice and try it out today: simply head to onlyoffice.com. If you’re after the desktop app for Windows or macOS, these can be downloaded here: there’s support for Windows XP and macOS 10.11 if you have older devices, but of course, the apps also support the latest versions including Windows 11 and macOS Big Sur.