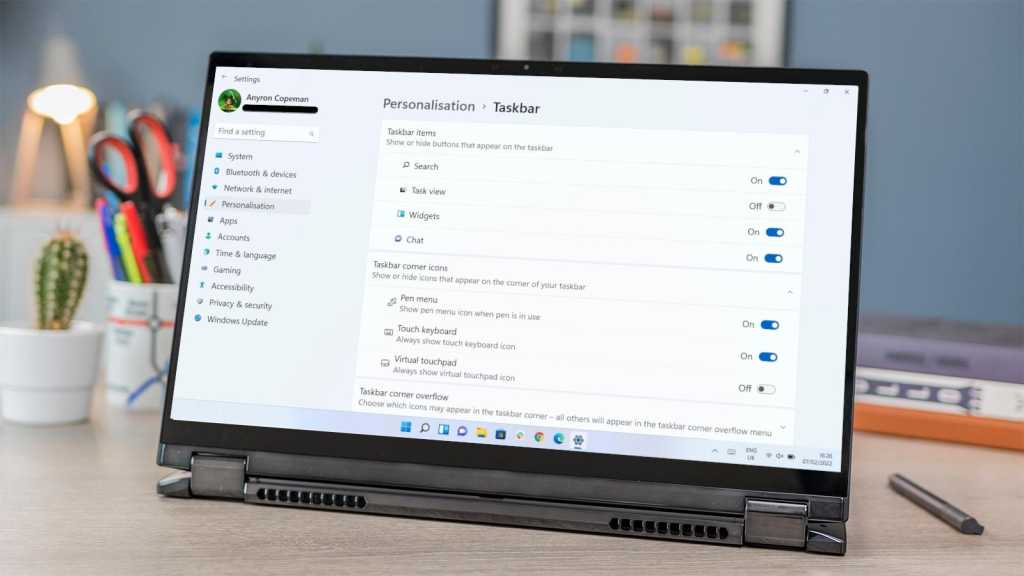 Several upcoming Windows 11 features appear to have been revealed, prior to any official confirmation from Microsoft. These include stickers for desktop wallpapers, a Sustainability section within Settings and the ability to hide the taskbar when using as a tablet.

A recent Insider build of the OS is to blame, where all are currently marked as disabled. These were spotted by eagle-eyed user Albacore, who has a strong reputation for Windows leaks. Microsoft only publicly discusses features that are enabled, which explains why they’re not official yet.

The news comes just days after Microsoft confirmed it would be using the Dev Channel of the Windows Insider Program for more experimental features. Some of these may never make their way to the final version, but that doesn’t appear to be the case with the disabled features.

Stickers are expected to take a similar form to those you’ll find in messaging apps. A dedicated editor app will allow you to customise them, before adding directly to the desktop. The stickers you choose will persist even if you change the desktop background. Hopefully at some point this will be expanded to include Widgets, another new Windows 11 feature.

The return of automatic taskbar hiding for tablets is the first admission from Microsoft that Windows 11 needs touch-specific features. Windows 10 had a dedicated tablet mode with a completely different UI, but that was ditched for the new OS.

Adding a Sustainability section to Settings reflects the growing importance of the environment to Microsoft. It will initially be limited to eco-friendly options and recycling information, but this is likely to be expanded over time.

Albacore also revealed a couple of other features. Focus Assist will simply be known as Focus, with more in-depth customisation and the ability to schedule sessions within Outlook. Priority notification settings will also be easier to access, rather than buried within menus.

It’s not clear when these features will arrive, especially as they need to be made available to Insiders first. That rules out a release in Windows 11’s February 2022 update, which brings Android app support to everyone for the first time.

Microsoft may even decide to wait until the 2022 feature update, which is expected to begin rolling out in July.