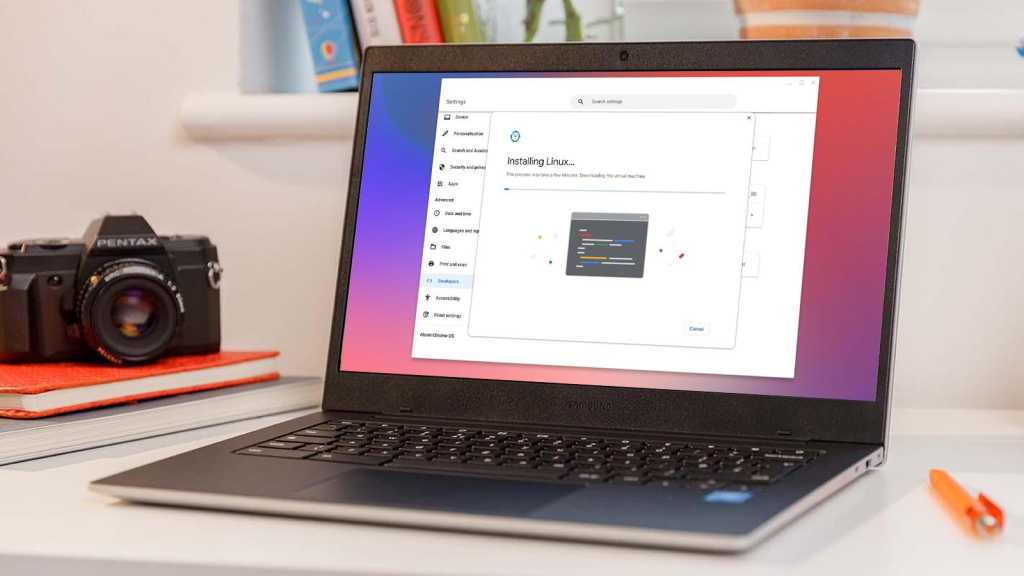 ChromeOS has come a long way in a decade. Not only can you now use many apps offline, but newer Chromebooks can also run Android apps, massively increasing their versatility.

If you yearn for more powerful capabilities and dedicated desktop apps, this can be achieved by setting up Linux on your Chromebook. The good news is that this is much easier than you may imagine, and it doesn’t require you to wipe the hard drive or do complicated things with ‘distros’.

That’s because Google has made Linux available in ChromeOS itself. And here we’ll show you how to get  Linux running on your Chromebook.

Why use Linux on a Chromebook?

The main advantage is the ability to run full desktop apps on your Chromebook. For example, while you can edit photos through web apps including Snapseed or Pixlr on a regular Chromebook, they are either very basic or require subscriptions to access the more powerful features.

With Linux, you can download GIMP (GNU Image Manipulation Program) which gives you many of the tools that you’d find in the full version of Adobe’s Photoshop, but all for free – and on a Chromebook.

Can my Chromebook run Linux?

If your Chromebook was released in 2019 or later, then it should be able to run Linux. For any models before that date, you can check Google’s list of compatible devices.

As Linux is essentially running within ChromeOS, you’ll benefit from a more powerful Chromebook, but Linux is a lightweight OS anyway. One thing to check is how much storage your Chromebook has, as many models have very small ‘hard drives’ (they’re often fitted with eMMC, which is basically an embedded SD card).

A lack of storage can be a problem if you want to install lots of apps.

You can install full versions of Linux on Chromebooks, but not via the in-built feature in ChromeOS.

Doing so is quite complicated and not something we’ll be covering in this tutorial, but there are of course plenty of useful online guides to take you through the process.

The version of Debian Linux included with ChromeOS doesn’t include a desktop environment, so all commands are run through a terminal window. This sounds complicated, but if you just want to install a few Linux apps then it’s quite straightforward.

You also have the option to find the Linux installation files for the apps you want. These can be downloaded and set up without needing to use any command line codes. So it really is something even the most non-technical of users can try out.

There are a few things that aren’t supported, such as hardware acceleration, cameras and Android Emulators. You can connect an Android phone via USB, but iPhones remain aloof.

Is it safe to use Linux on a Chromebook?

Because you’re running Linux within ChromeOS on a Virtual Machine, the system creates a ‘sandbox’ to contain Linux and its apps. This means that even if you encounter problems with a Linux app, it won’t affect your normal ChromeOS apps.

But, as the sandbox encompasses all the Linux-related items on your Chromebook, Linux apps can affect other Linux apps.

One of the best parts of using this method is that if you want to get rid of Linux and any installed programs, just go into the settings and disable the feature. This will immediately delete everything Linux-related and leave your Chromebook, ChromeOS apps exactly as they were before  you enabled it.

How to install Linux on a Chromebook

Setting up the Linux feature on ChromeOS is very simple. Here’s the steps you need to take.

ChromeOS will now download and install the Virtual Machine software that will be used to run Linux. When this is done, a new terminal window will appear with a command prompt ready. This means Linux is installed and running, so you’ll want to find some apps to install.

How to install Linux apps on a Chromebook

There’s a little bit of detective work required when it comes to installing apps.

The simplest way to install a program is to track down its installer package, which will need to be in the .deb format. This is basically the same as you would do it on Windows or macOS if you don’t go through their App Stores, i.e. by searching online.

If you have a particular app in mind, then it’s worth going to its website to see if there is a .deb package available to download. This is similar to a .exe on Windows or .dmg on macOS.

If the site has one (usually you’ll find it in the Downloads > Linux section of the site) then simply download it to your Chromebook. When it’s there, double-click it and follow the prompts to install it on your device.

When this is done, you should find the app in your ChromeOS launcher, most likely inside the Linux Apps folder.

Should you not find a .deb file for the app you require, all is not lost as you can most likely install it via the command line.

In the window that opened up when the Linux install was completed, you can enter code commands that will find and set up the apps on your system.

First off, you’ll want to make sure that everything is up to date, so type in the following command then press Enter. 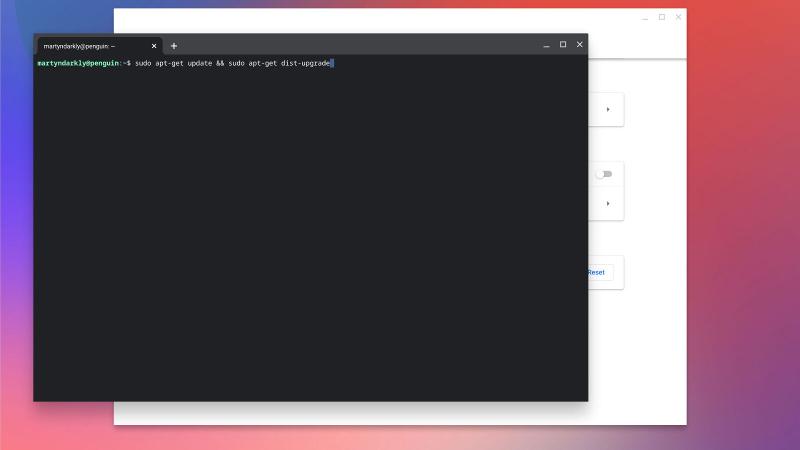 Code will begin to stream down the page, then you’ll be asked if you want to continue. Type Y and press Enter to complete the process.

When the update is finished, you’ll be presented with a prompt once more. Now you’re ready to install an app. While you can use the following standard command to directly install apps:

sudo apt-get install  [followed by the name of the app]

You’ll need to search online for the apps you can actually install, but with free offerings like LibreOffice (full desktop Office package), Audacity (audio editing software) and GIMP (photoshop alternative) available, they are good places to start.

So, for examples, installing Libre Office would require the following command; 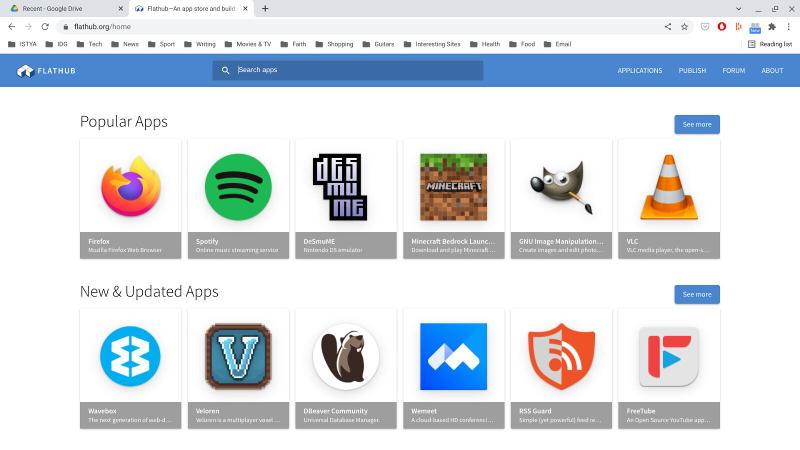 Many programs these days use something called a flatpak which is a new way for Linux apps to package up the files required for a program. The advantage of this is that after the initial setup, you can use the Flathub, which acts as an app-store for Linux and is compatible with ChromeOS.

To set this up, type the following command:

The last step is to restart Linux, so go down to the Terminal icon in the dock, right-click, then select Shut down Linux.

Next, open the ChromeOS launcher, find the Linux apps folder and double click on Terminal. 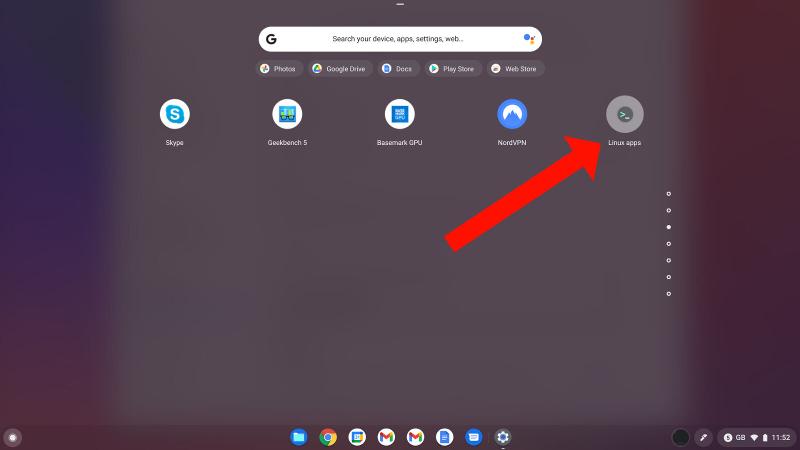 Linux will restart with Flatpaks and Flathub installed. So open the Chrome browser, go to https://flathub.org/home and find an app you want to install. To finish the process, scroll down to the bottom of the app’s page and enter the command line instructions shown (there will only be a couple). Then agree to the installation questions and the app will be installed on your Chromebook.

Now, when you return to the Linux apps folder in the ChromeOS launcher, you should find that the app is installed and available to use. 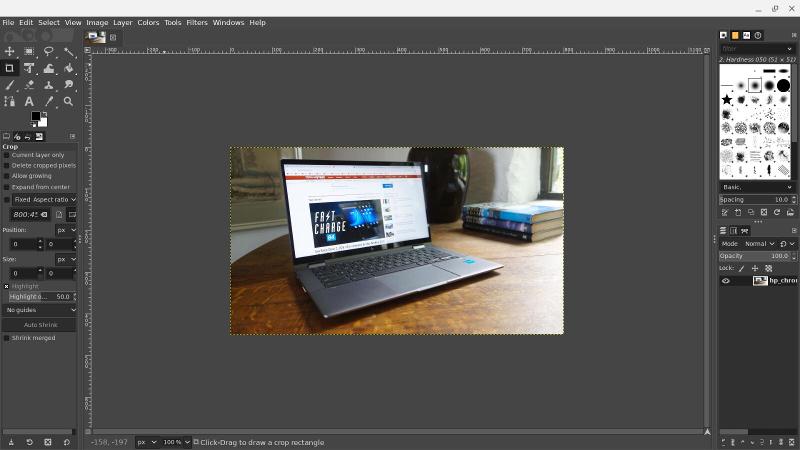 One thing to note is that if you want to use downloaded files with the app, you’ll need to move them to the Linux files folder in My files, as the sandboxed nature of the Linux environment means it can’t access your normal ChromeOS folders.

We did find the flatpak route threw up a few errors here and there, so be prepared to put your Google skills to use for troubleshooting, but we definitely think that advantages of running linux apps on a Chromebook far outway the occasional detective work you may need to employ to keep things working.

How to remove Linux from a Chromebook

If at any point you want to go back to just ChromeOS and remove all traces of Linux and its apps, simply go to Settings > Advanced > Developers > Linux developers environment > Remove Linux development environment and click the Remove button.

Everything will be deleted and your system will look like Linux was never installed at all. 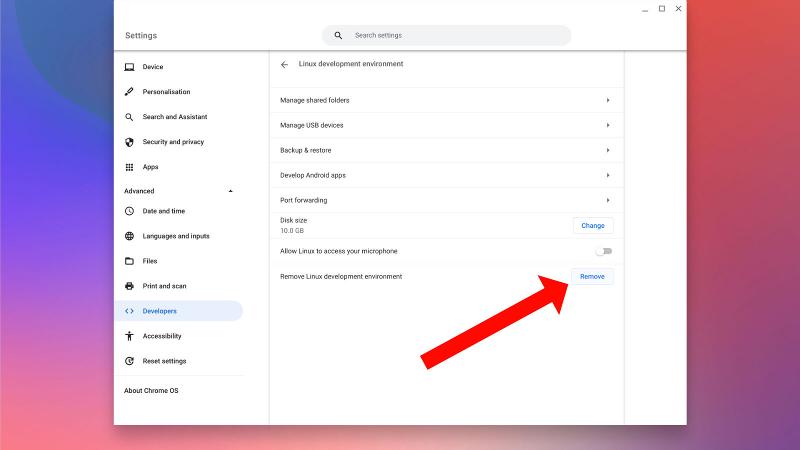 If you want to add the incredibly useful capabilities of Linux apps to your Chromebook, but find that your device doesn’t support the feature, or just want a more powerful Chromebook to take full advantage of these new software options, be sure to check out our guide to the best Chromebooks.