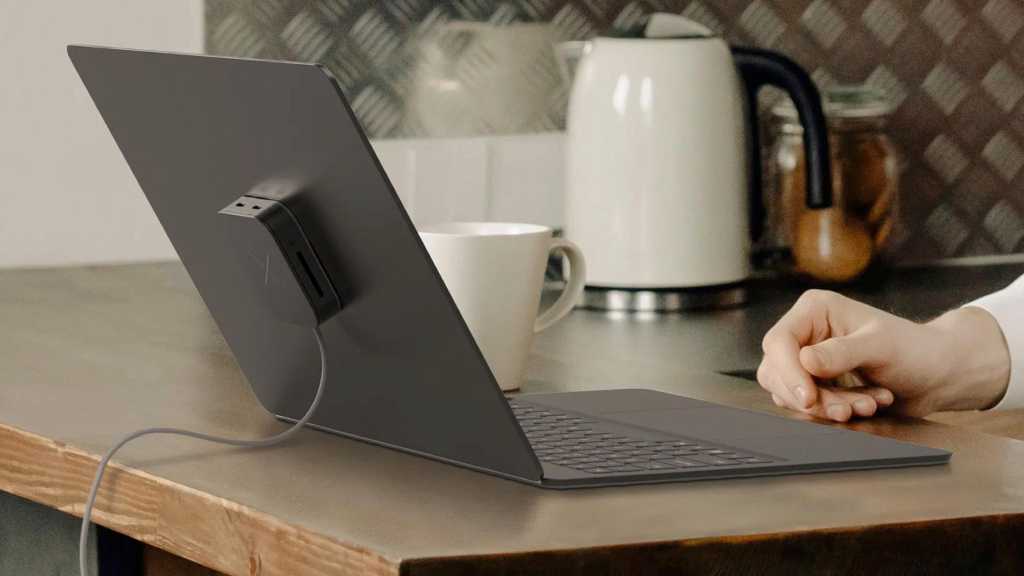 Laptops have come a long way over the last few decades. The slick, lightweight powerhouses we’re familiar with today would have been unthinkable when the first laptop made its debut in the 1980s. A raft of innovations since then has made the portable PC a product many of us can’t live without.

Understandably, many companies have devoted themselves to finding the next big thing in a bid to try and make their laptops stand out. In recent years, much of this has focused on extracting the most from internal components or opting for a 2-in-1 design so you get a tablet as well as a laptop, or at least something that’s a bit like a tablet.

However, Craob is taking a wildly different approach. The little-known – and hard to pronounce – manufacturer recently revealed the Craob X, an ultrabook with no ports at all. That’s right, not even a charging port.

Its solution to charge the battery? A wireless charger which can magnetically attach to the back of the display. This supports fast charging and doubles as a hub for some ports so, technically, it does still have USB-A, USB-C, 3.5mm headphone jack and an SD card slot.

It certainly looks like a tidy solution, though a solution to a problem that didn’t really exist. And it only have one of each of the above ports, so if you need more you’d do what? Plug in yet another adapter? It just doesn’t make sense.

Unworthy of the hype

Craob advertises several key features on its website, but none of them justify the port-free design.

First up is the ultra-slim design – the Craob X is just 7mm thick. For context, Apple’s slimline MacBook Air is 16mm. However, it’s not clear what benefit this provides, aside from taking up slightly less space in a backpack.

What’s more, I’d have serious concerns about the long-term durability of such a slim device, especially when information about the company is so scarce.

Perhaps the bigger benefit is portability, with the Craob X weighing just 860 grams. That’s undoubtedly impressive, but several laptops already come in at under 1kg without ditching their ports. Is this a worthwhile trade-off? Not for many.

Another thing you might have noticed from photos is the Craob X’s near-bezel-less design. The display punctured by a single front-facing camera, making it look more like an oversized smartphone than a laptop. I’d have no qualms about this if the display could be detached to become a tablet, but that doesn’t appear to be the case.

In this form factor, I’d much prefer the webcam within a slim top bezel to a tiny hole-punch, which may also affect image quality. Apple might have embraced the notch on its latest MacBook Pro, but I sincerely hope other laptop makers don’t follow suit.

And with virtually no thickness to spare for the keyboard keys to have any real travel, the typing experience is surely compromised, too.

It’s a real shame, as the Craob X looks like a good laptop on paper. It’ll use Intel’s latest 12th-gen chips (Alder Lake, up to Core i7), alongside Iris Xe integrated graphics and up to 32GB of DDR5 RAM. That helps power a 13.3in 4K display, while you also get Wi-Fi 6E support and SSDs up to 2TB.

However, plenty of questions remain. What is the battery capacity? How fast can it charge? Does it support Qi wireless charging? Is the display LCD or OLED? Is it a touchscreen? Does it run Windows 11? What are the webcam specs? Does it support Windows Hello? Is there a fingerprint sensor?

These are all questions most prospective buyers will ask before buying a new laptop. The price also remains a mystery, but the combination of new tech and premium specs suggests it’ll be well over £1,000/US$1,000. Craob’s website states the device is ‘coming soon’, but the company has no track record of bringing products to market so that could mean anything.

Ultimately, there are too many compromises for many people to even consider the Craob X. I’m glad companies are willing to really push the boundaries when it comes to laptop design, but losing the ports isn’t the right approach. If anything, most people want more ports on their laptop, not fewer.

If you’re in the process of choosing a new laptop, do read our guide to the best laptops to buy. If you’d rather not pay full price, take a look at the best laptop deals available right now.