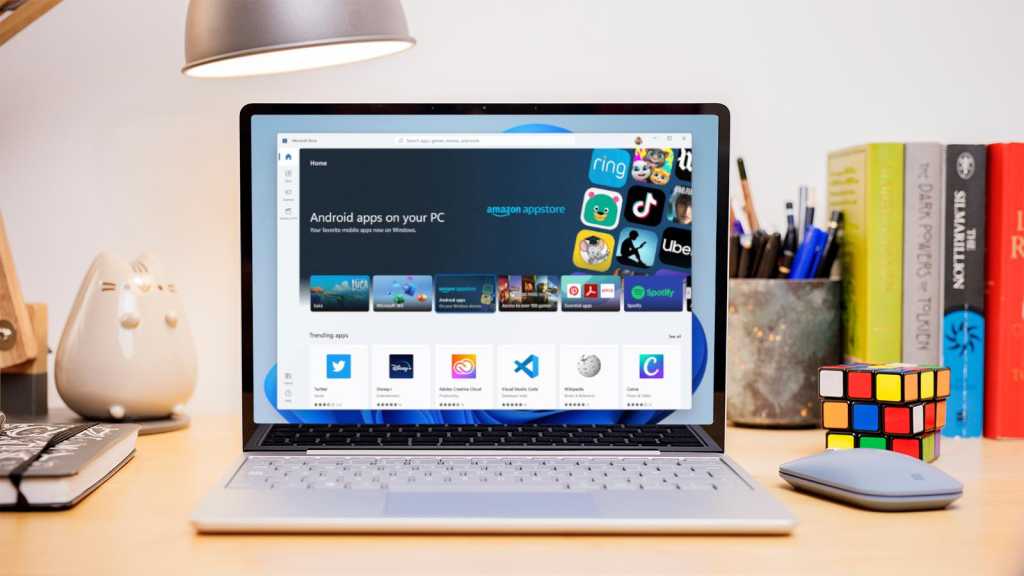 Windows 11 has just received its first major update since launching. Version KB5010414 delivers improvements to the taskbar, two redesigned stock apps and a public preview of native Android app support. The update began rolling out on 15 February, but it’ll take some time to arrive on all eligible devices.

Microsoft first revealed the news in a late January blog post, before confirming the update’s release three weeks later. Adding simpler window sharing, mute/unmute for calls and weather integration won’t solve all the taskbar’s problems, but they should prove useful for many people. Elsewhere, both the Notepad and Media Player apps have a new, simple aesthetic that’s more in keeping with Windows 11’s Fluent design language.

But native Android app support is the big new feature. It was announced alongside Windows 11 back in June, but early builds have been exclusive to the Windows Insider Program so far. That has now changed, with a public preview of the feature rolling out to everyone. It’s still not the final version, but gives you a good idea what to expect.

Downloaded Android apps are fully compatible with Windows 11, although you’re limited to the Amazon Appstore for now. However, Microsoft has indicated it intends to add the Epic Games Store at some point in the future. A workaround also allows you to access the Google Play Store instead, but there’s little chance this will be officially supported anytime soon.

However, the update’s recent arrival in the Beta and Release Preview channels of the Windows Insider Program has been causing issues for many people who downloaded it. Users have reported problems while printing and unusually high CPU loads, which have led to overheating. If the update hasn’t arrived on your device yet, it’s probably worth being patient – the final version is thought to have ironed out these issues.

There’s no sign of it in the KB5010414, but  Windows Latest has spotted another upcoming taskbar feature. Microsoft’s Your Phone companion app will now be integrated into the taskbar, allowing you to quickly access the three most recently used apps on a recent Samsung phone. The screenshot below gives you an idea of how it’ll look:

The February update isn’t expected to impact Windows 11’s first feature update, expected in the second half of 2022. It’s rumoured to add drag-and-drop support to the taskbar and support for third-party widgets, but news is relatively thin on the ground so far.

At the end of January, Microsoft also confirmed that Windows 11 was entering its final stage of availability. That’s ahead of its initial target of mid-2022, although all compatible devices have been able to download it since October.