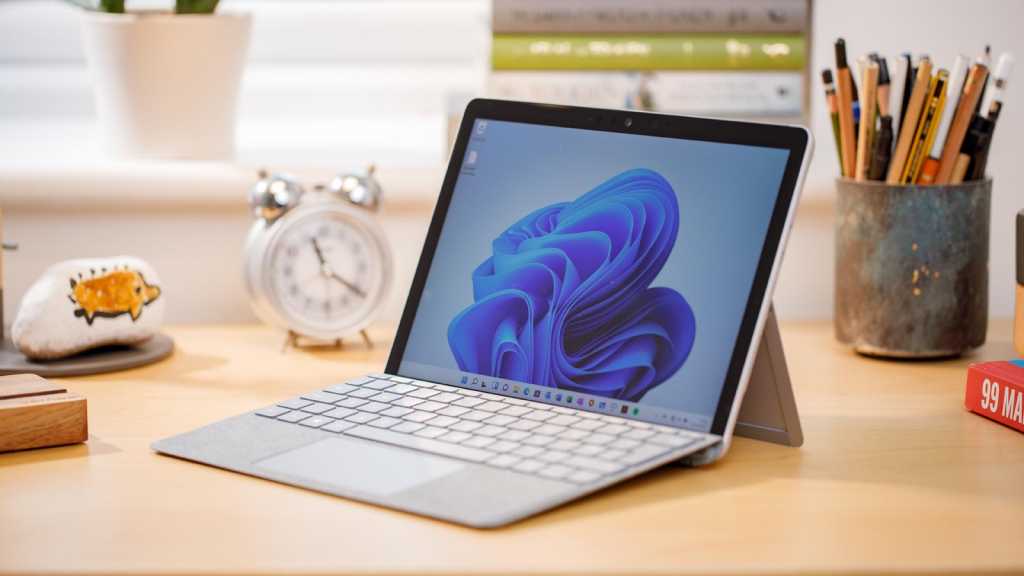 A tablet with detachable keyboard was the original product in the Surface range, but it wasn’t until 2018 that Microsoft 2-in-1s became genuinely affordable.

That’s when the first Surface Go arrived, making it one of the cheapest devices to run a full version of Windows.  That’s continued across two subsequent iterations, although the Surface Go 3 was one of the less exciting products Microsoft released last year. Aside from a processor upgrade, running Windows 11 out of the box was the only other change of note.

It looks like the company is skipping a year, too, with no announcement at the October event. Here’s everything you need to know about the Surface Go 4 at this early stage.

When will the Surface Go 4 be released?

Microsoft held a Surface event on 12 October 2022, but the Surface Go 4 wasn’t among the announcements. Instead, we saw the new Surface Pro 9, Laptop 5 and Studio 2+.

As Windows Central’s Zac Bowden tweeted when the event was announced, the Go 4 isn’t expected until at least 2023:

It seems likely that the Go 4 will arrive in Microsoft’s usual Spring slot in 2023 – this usually takes place in April or May. It’s possible we don’t see a new model until late 2023, but that would represent the longest gap between generations of the Surface Go so far.

For context, here’s when the previous generations of Surface Go were released:

How much will the Surface Go 4 cost?

We have no idea how much Microsoft is planning to sell the Surface Go 4 for. However, it’s remained relatively consistent with Surface Go pricing so far:

Moving to a Qualcomm chip could affect the price, but Windows Central’s Zac Bowden says

If Microsoft does decide to make big changes for the Surface Go 4, it could get significantly more expensive.

Remember, the crucial Type Cover will probably continue to be sold separately. The latest version will usually set you back at least an extra £99.99/ US$99.99, or more if you’d prefer an Alcantara finish.

What specs and new features will the Surface Go 4 have?

The Surface Go 4 isn’t expected until next year. There aren’t many concrete rumours right now, but we still have a fairly good idea of what to expect.

One change we’re almost certain to see comes under the hood. The Go 3 arrived just a couple of months before Intel revealed its 12th-gen mobile CPUs at CES. Prior to any rumours, it seemed likely that the Go 4 would be powered by Alder Lake, although it may be 13th-gen Raptor Lake by the time the device is released.

But will Microsoft make the move to an ARM-based Qualcomm chip instead? In a recent video, Windows Central’s Zac Bowden describes it as “pretty likely”, but “not 100% confirmed yet”. Bowden went on to say that it’s something Microsoft is considering internally, and his strong track record for Surface news gives us no reason to doubt what he’s saying.

As a more affordable device, the Go 4 is unlikely to use the top-of-the-line Snapdragon 8cx Gen 3, but a specific chipset isn’t known at this stage. Bowden’s co-host Daniel Rubino speculates that it could use the older Snapdragon 8cx Gen 2, which would be considered a budget option by that stage.

However, Bowden says “there will likely still be Intel SKUs” on high-end models and for business users.

Moving to ARM should help benefit battery life, improving Microsoft’s claims of up to 11 hours on a single charge. However, the battery depleted much faster during our review testing, so hopefully the 28Wh capacity is increased too.

The Surface Go 2 increased the display from 10in to 10.5in without changing the total footprint of the device, but that’s the only design change we’ve seen. Thinner bezels could allow Microsoft to fit an 11in display here, but it may be reluctant to make a budget device look just as good as the premium Surface Pro. Indeed, Zac Bowden says “I wouldn’t expect any real design changes to it”.

That’s why it’s also unlikely we’ll see the Go 4 move to a high refresh rate display possible if we do see a price increase. Either way, the 1920×1080 PixelSense (LCD) display probably won’t change – it’s plenty detailed for most people buying the Surface Go.

Business versions of the Surface Go 3 have optional support for 4G LTE. That’ll probably stay the same for the Go 4, with the Surface Pro 9 much more likely to shift to 5G.

One of our main frustrations with the Go 3 was its lack of ports. There’s just one USB-C, one microSD and Surface Connect for charging. It would be nice to see at least one more USB-C port (potentially with Thunderbolt 4 support), alongside USB-A and maybe a 3.5mm headphone jack. That may increase the thickness of the device, but it would be a worthwhile trade-off.

We’ll update this page once more is revealed about the Surface Go 4. In the meantime, you may be interested in similar articles on the Surface Pro 9 and Surface Laptop 5.