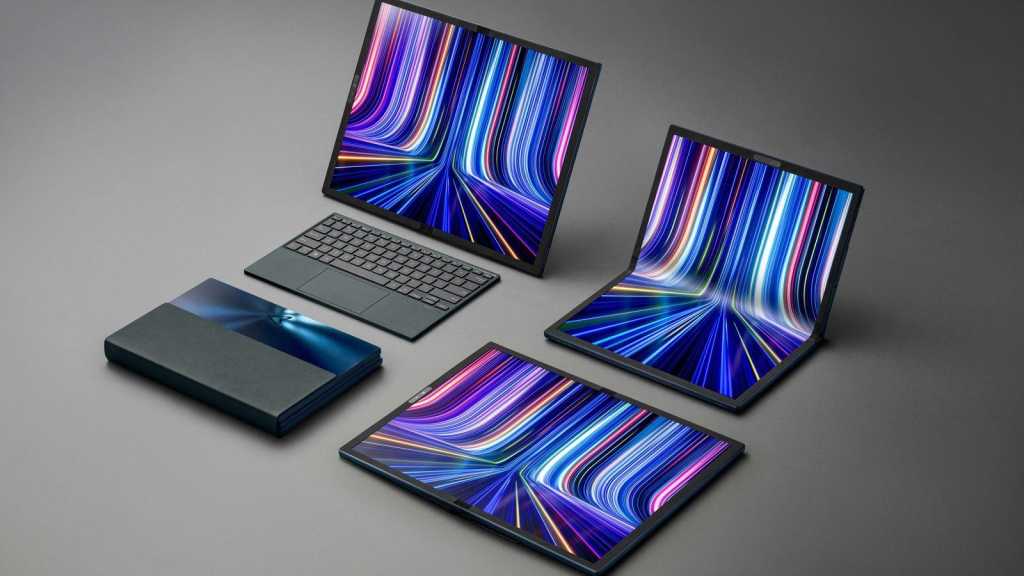 Asus’s CES 2022 keynote was titled “The Incredible Unfolds”, and the star of the show didn’t disappoint. The Zenbook 17 Fold OLED is the company’s first ever device with a folding display: a 17.3in screen which can seamlessly fold in half.

A key attraction of this unusual form factor is that you essentially get two different form factors in one. Using the device unfolded, you get full access to the large touchscreen: a 2.5K OLED display with boxy 4:3 aspect ratio. However, this can be folded in half to create two screens, both of which are 12.5in Full HD (1920×1080) panels. This makes it much more portable than any other 17in laptops you can buy.

In both modes, you can use the Zenbook 17 Fold OLED with Asus’s optional accessories, both of which have been specifically designed for the device. The ErgoSense keyboard and trackpad both connect wirelessly via Bluetooth, allowing the Fold OLED to be used in a total of five different modes. As well as a desktop PC or tablet set-up with on-screen keyboard, it can also function like a book or folded horizontally with the physical keyboard connected.

The Zenbook 17 Fold OLED also benefits from Asus’s ScreenXpert 2 and Mode Switcher software, which helps manage different windows and content, including while folded. Speaking of software, the device runs Windows 11.

It’s powered by Intel’s new 12th-gen CPUs. Asus has opted for i7 chips, albeit from the slightly less capable U-Series which isn’t the fastest series Intel offers. Still, combined with Iris Xe integrated graphics and 16GB of RAM, performance shouldn’t be an issue. The 1TB SSD also supports PCIe Gen 4, while both USB-C ports are compatible with Thunderbolt 4.

Other key features include a 75Wh battery and 5Mp webcam, the latter benefitting from Asus’s 3D Noise Reduction technology which aims to provide clearer video calls.

The specs and features mentioned above are enough for the Zenbook 17 Fold OLED to be certified as an Intel Evo device. That makes it one of the first ever foldables to get the badge, after Intel expanded the criteria to include different form factors.

As for the device itself, you’ll be waiting a while to get your hands on one. Despite being announced at CES, the Zenbook 17 Fold OLED isn’t expected to be released until Computex in May at the earliest. It’s also not clear how much it’ll cost but – let’s face it – it’s going to be expensive.

Asus also announced new additions to its ROG range of gaming hardware at CES 2022, including four new laptops and the Flow Z13 tablet.