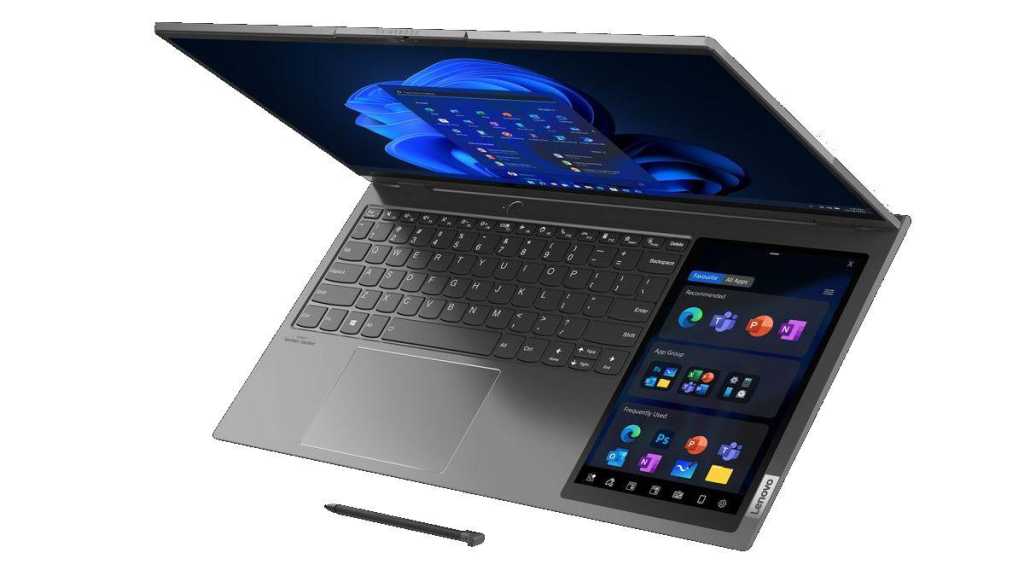 Dual-screen devices are all the rage these days, but Lenovo’s approach is something we haven’t seen before. The third generation of its ThinkBook Plus laptop combines a 17.3in main display with secondary 8in panel embedded next to the keyboard. It’s a huge change compared to the design of its predecessor, which opted for an e-ink screen on the outside of the device.

Lenovo says the move is in response to demand for a truly mobile workstation, offering the multitasking functionality you’d only usually get by connecting external displays. Crucially, the second panel has been designed to be fully compatible with Windows 11. Any app or program can be displayed here, allowing it to be used for note-taking, image editing or quick calculations. Lack of precision on such a small screen could be an issue, but the digital pen built into the device should solve that.

Lenovo says it can also act as a “waterfall” display, allowing content from the main screen to extend onto the secondary panel where appropriate. You can also mirror content from your smartphone here, enabling seamless transfer of content between devices. Even when not in use, a so-called “Magic Launcher” keeps frequently used apps here for easy access.

To accommodate the second display and a full-size keyboard, the ThinkBook Plus is much wider than traditional laptops. The 17.3in main screen adopts the ultra-wide 21:10 aspect ratio more common on smartphones, although it is perfectly suited to widescreen content such as films on Netflix as well as for having two or three different apps or windows open next to each other.

A resolution of 3072×1440 ensures visuals are crisp and detailed, especially when combined with a 120Hz refresh rate. Even the 8in secondary screen comes in at 800×1280, although its quality is much less important.

Under the hood, the ThinkBook Plus is powered by Intel’s new 12th-gen CPUs, alongside Iris Xe integrated graphics and up to 32GB of RAM. You also get a 69Whr battery with support for fast charging, alongside plenty of ports and a fingerprint reader. The video calling experience should be solid too, with Full HD webcam (complete with physical privacy shutter) and dual array microphones.

The ThinkBook Plus is undoubtedly a high-end, premium device, but we don’t yet know how much it’ll cost. It’s also not clear when it’ll go on sale: you may be waiting several months.

If you’re looking to buy something right now, here’s our recommendations of the best laptops.