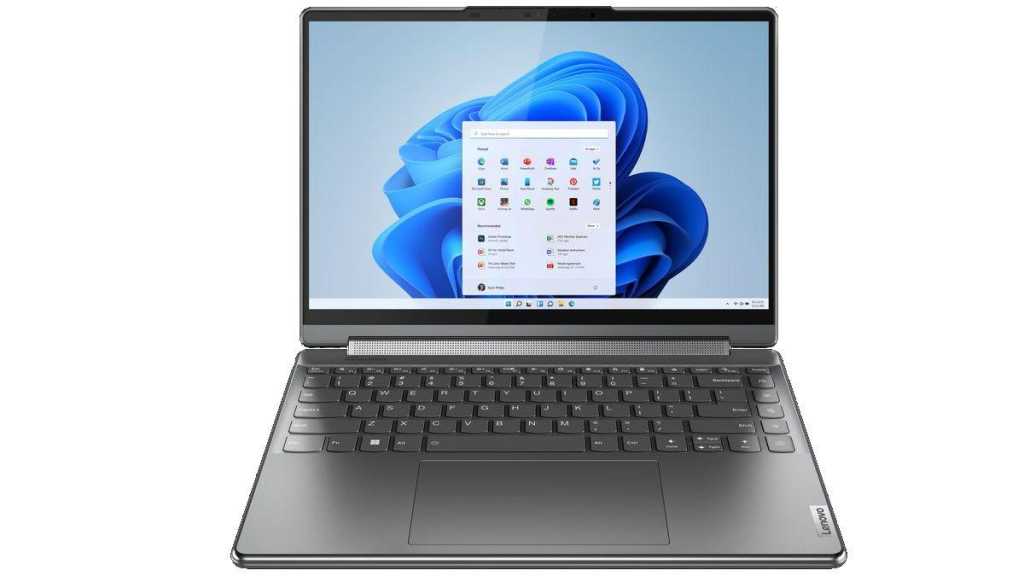 In 2012, Lenovo arguably popularised the ‘convertible’ form factor with the release of its original Yoga laptop. A decade later, the lineup is stronger than ever following the announcement of three new Yoga devices at CES 2022.

The new Yoga 9i, Yoga 7i and Yoga 6 don’t introduce wholesale changes, but several refinements and tweaks should be a hit with buyers.

Let’s start with the Yoga 9i, Lenovo’s flagship convertible laptop. The most obvious change here is a move to new 12th-gen Alder Lake CPUs, which Intel also announced at CES. Shifting to a new hybrid architecture is expected to benefit both performance and battery life, with a choice of Core i5-1240P or Core i7-1260P. All configurations include Iris Xe integrated graphics, which make it well-suited to streaming and content creation.

In those two scenarios, you’re likely to notice another upgrade: audio. Lenovo says the Yoga 9i’s Rotating Sound Bar is louder than previous generations, with the quad speakers supposedly delivering improved clarity, bass and depth. However, it remains to be seen how much of a difference this will make in real-world usage.

The other key change is something you might not have seen before. The Yoga 9i now has a new set of easy-access keys on the right side of the keyboard, allowing you to quickly toggle some of the most frequently used functions. Smart power performance mode allows you to either boost performance or battery life depending on what you’re doing, with Background Blur instantly obscuring your surroundings during video calls. Vibe check lets you switch between different sound modes, next to a toggle for switching between light and dark mode.

Aside from its 360-degree hinge, the big appeal of the Yoga 9i remains its touchscreen display. There are no upgrades here, but you’ll do well to find anything that tops this 14in 4K OLED panel. That’s only found on the top-spec model, though, and cheaper configurations have either 2.8K OLED or Full HD LCD screens.

Another slight disappointment is the fact they’re all 60Hz only. High-end laptops are starting to embrace high refresh rates, but not the Yoga 9i.

Other upgrades include a trackpad that’s 45% larger and extra ports, including two USB-C with Thunderbolt 4 support. However, all this doesn’t come cheap: the Yoga 9i will start at US$1,399.99 (approx. £1,030) when it goes on sale in Q2, with high-end models expected to be significantly more expensive.

If you’re looking for something more affordable, then Lenovo has two other new Yoga devices to tempt you.

Available in both 14in and 16in variants, the Yoga 7i is a thin (19mm) convertible that doesn’t sacrifice power to achieve its sleek design. It again uses 12th-gen Intel chips, with the same choice between Core i5-1240P and Core i7-1260P. The 14in sticks with Iris Xe integrated graphics, but the larger model offers the chance to try Intel’s new Arc discrete GPU, which the chipmaker is still yet to formally announce.

Other key specs are familiar: a 2.8K OLED touchscreen, large battery (71Wh on 14in, 100Wh on 16in) with fast charging and Thunderbolt 4 support. However, unlike the Yoga 9i, the stylus is an optional extra rather than included in the box.

If you’re looking for a Lenovo laptop which prioritises sustainability, the Yoga 6 should appeal. The cover of the device is made from either recycled aluminium or 50% recycled plastic. 30% of the power adapter is recycled plastic, while post-consumer plastics make up almost 25% of the battery cells. Sustainability efforts extend to the packaging, which is almost completely recyclable.

The device itself uses AMD’s Ryzen 7 5700U processor instead of Intel silicon, although this isn’t from the new Ryzen 6000 Series. It helps power a 13.3in, Full HD (1920×1080) display, which supports both touch input and an optional stylus.

Lenovo’s new laptops aren’t limited to the Yoga range. The Chinese company also revealed the ThinkPad Z13 and Z16, business-focused devices aimed at reducing environmental impact and appealing to younger generations. They feature AMD’s new Ryzen 6000 Series chips, 1920×1200 displays (13in or 16in) and covers made using either vegan leather or recycled materials.

Looking to buy a convertible and want more recommendations? Then read our guide to the best 2-in-1 laptops.