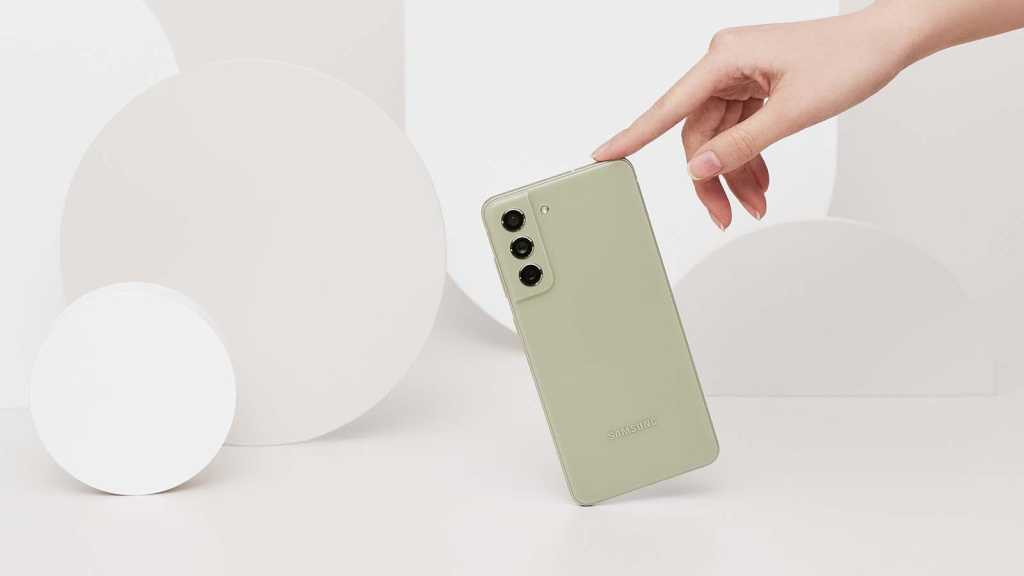 The worst kept secret in the smartphone industry has finally been revealed, as Samsung used CES 2022 as an excuse to finally unveil the £699/$699 Galaxy S21 FE.

Coming a full 354 days after the unveiling of the core Galaxy S21 line-up, the S21 FE (it stands for Fan Edition) has been delayed time and time again. At several points it was even rumoured to have been cancelled entirely, just another casualty of the chip shortages and production problems caused by the Covid pandemic.

In any case, here it is, and it matches leaks exactly. The design is a clear follow-up to the original S21, with the contour cut corner around the camera returning, though no longer set in a contrasting colour. Instead it matches the finish of the rest of the phone: either white, graphite, olive, or lavender.

At 7.9mm thick and 177g it’s the same width but a touch heavier than the regular S21, but that’s understandable given that it packs a larger 6.4in display – a 120Hz AMOLED, as you’d expect.

The main 12Mp camera is borrowed from the S21, but the 12Mp ultrawide and 8Mp 3x telephoto are slightly lower spec than their counterparts. Selfie fans should enjoy the 32Mp front-facing camera though – it’s a return of the selfie camera that impressed on the S20 FE a little over a year ago.

A 4500mAh battery is topped up by 25W wired and 15W wireless charging, while the core chip will be a Snapdragon 888 or Exynos 2100 depending on your region. It’s joined by either 6GB RAM and 128GB storage, or 8GB RAM and 256GB storage. Finally, an IP68 water-resistance rating rounds out the core spec.

One odd perk of the delayed launch is that the S21 FE will be Samsung’s first phone to launch with Android 12 supported out of the box, along with Samsung’s latest One UI 4 software skin running on top.

One challenge of the delay is that the phone is launching just weeks before we expect to see the updated Galaxy S22 line-up launch in February, which will likely bring with it the new Snapdragon 8 Gen 1 chip, updated cameras, and the surprise return of the Note brand to replace the top-tier S22 Ultra.