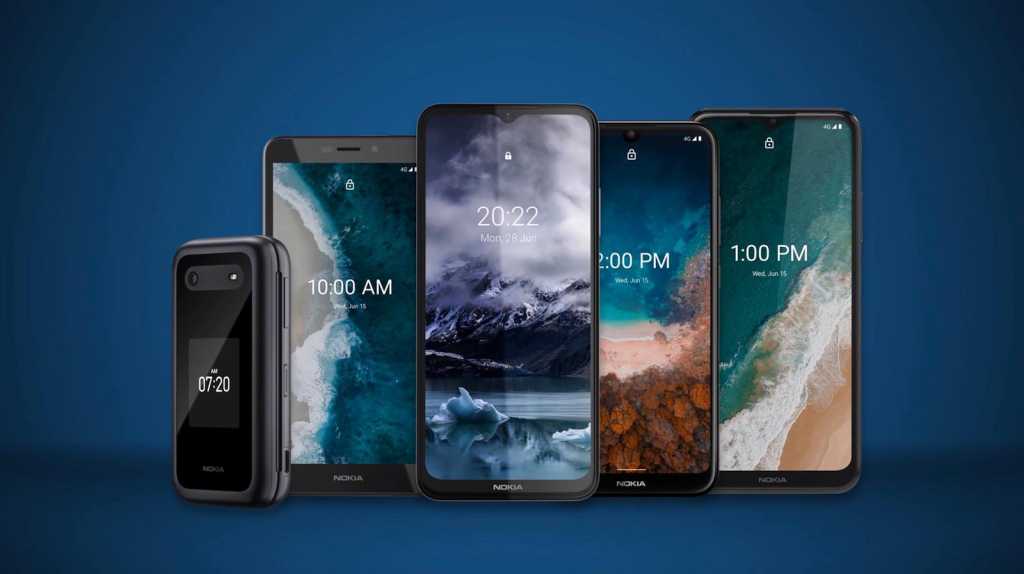 HMD Global, the company behind budget-friendly smartphone brand Nokia, is refocusing its US efforts in 2022 – and it’ll start with the introduction of five new phones exclusive to US customers, as confirmed at CES 2022 today.

Interestingly, rather than working with popular US carriers like Verizon and Sprint on contracts, Nokia has set its sights on the pre-paid phone market, with all upcoming phones in its collection coming in at a sub-$250 price point to make them more tempting.

That starts with the $79 Nokia 2760 Flip, Nokia’s latest 3G feature phone designed for those 55 and over not ready to make the switch to a smartphone.

The retro flip design is simple to use with an interior and exterior display, and Nokia has boosted the size of the keyboard and navigation keys to make it easier to operate. There’s also an emergency button to call an emergency contact and share GPS coordinates and other data found on the side of the phone if necessary.

It might be a feature phone, but it does have the capability to run basic apps like Google Search, Maps and WhatsApp for limited smart capabilities.

There’s no release date just yet, but expect it to appear some time in the first half of 2022.

The next step up in Nokia’s US collection is the Nokia C100, a $99 smartphone with 4G capability.

You might question why Nokia is launching a new 4G smartphone in 2022 with the 5G rollout underway, but Nokia believes that the shift to 5G means that 4G smartphones are becoming harder to come by and it wants to fill that gap in the market. It makes sense given the limited 5G connectivity in the US right now, and the additional cost that 5G connectivity comes with.

The Nokia C100 boasts full Android support, and like the rest of Nokia’s US offering, prioritises display size and battery life over sheer performance. With that said, the Nokia C100 sports a 5.45in display and a 3000mAh battery, with internal specs yet to be detailed by the company. It does have a rear-facing 8Mp camera for quick snaps, though.

The headline change is the larger display, measuring in at 6.1in with a Full HD resolution, making it better for watching TV shows and TikToks on the go. That’s paired with a larger 4000mAh battery for longer battery life, and it also boasts Nokia’s signature circular camera housing on the rear.

Slated as Nokia’s premium 4G smartphone, the Nokia G100 comes in at a still-affordable $149 but offers a big visual change compared to previous Nokia smartphones.

While most Nokia smartphones sport the circular camera housing, the Nokia G100 ditches it for a new rectangular camera housing like those from the likes of Samsung to create something more ‘familiar’ for consumers.

There’s also an upgraded 6.5in FHD+ display for an improved viewing experience, and that’s powered by a whopping 5000mAh battery that, on paper, should provide multi-day battery life. There are also other premium touches like a fingerprint reader built into the side-mounted power button.

It wouldn’t be a 2022 smartphone launch without at least one 5G smartphone, and for HMD Global, that’s the Nokia G400. But despite the 5G connectivity, it’s still impressively affordable at just $239.

It sports the same new-look camera housing as the Nokia G100, but with a hugely upgraded camera setup, boasting a 48Mp main snapper, a 5Mp ultrawide and a 2Mp macro lens on the rear. There’s also another boost in the display department, up to 6.6in, with a Full HD+ resolution and, crucially, a 120Hz refresh rate for buttery-smooth scrolling.

Nokia also claims that the 5G connectivity of the G400 is ‘future proof’, suggesting that it’ll get updates that’ll allow it to work with emerging 5G technologies like carrier aggregation and VoNR (voice over new radio) once they become available.

The Nokia G400 is penned for release sometime in the first half of 2022, with a specific release date yet to be confirmed.

Nokia has stated that it aims to become the number one manufacturer of feature phones and number three in pre-paid phones overall, and today’s slew of phone announcements are likely only the beginning of Nokia’s renewed US focus to achieve that.

Considering the US smartphone market isn’t as varied as that of the UK and Europe – especially at the budget- and mid-range price points – it’s a welcome change that’ll give US consumers more choice at an affordable price point.