When you send a message to someone in WhatsApp, it’s private because of the end-to-end encryption. But digital messages are permanent, meaning there’s a record of what you said that persists forever in that chat history.

That’s one of the reasons why Disappearing Messages were introduced around a year ago. WhatsApp said it chose seven days as the default time before messages disappeared so that you’d have a record of things like shopping lists and other important details you might refer back to a few days after receiving or sending a message.

Now, it has added two new options: 24 hours and 90 days. You can select these – instead of seven days – by going into your WhatsApp settings and tapping Account > Privacy > Default message timer. 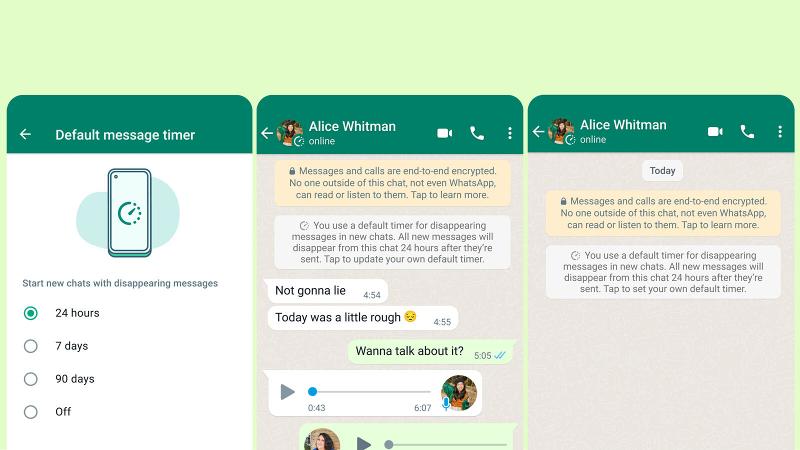 The other change is that the setting will apply to all new chats, regardless of whether you or another person started it.

Either person can turn off disappearing messages, and it’s worth knowing that there are certain situations where messages (including voice recordings and photos / videos) may not vanish as expected.

Of course, there are other ways to make copies of messages, voice recordings, photos and videos, such as screenshots saved to a camera roll and using a secondary device (such as a camera) to make a copy of them.

That’s why disappearing messages aren’t a guarantee what you send will be erased, so you should only use it if you trust the other person, or other people if it’s a group chat.

Note that the new durations for disappearing messages apply from the moment you select them: they won’t cause previously sent or received messages to disappear at a certain point in time, or at all if the feature wasn’t enabled before. It only applies to new chats or group chats.

In a group chat, any participant can disable disappearing messages, but a group admin can prevent this happening and allow only admins to turn this feature on and off.

Remember, too, that disappearing messages isn’t the only tool for extra privacy in WhatsApp. There’s also the option to allow recipients to view a photo or video once only.

After choosing photos and / or videos to send, tap the 1 icon to the right of the message box and you’ll see a pop-up message saying “Photo set to view once”.