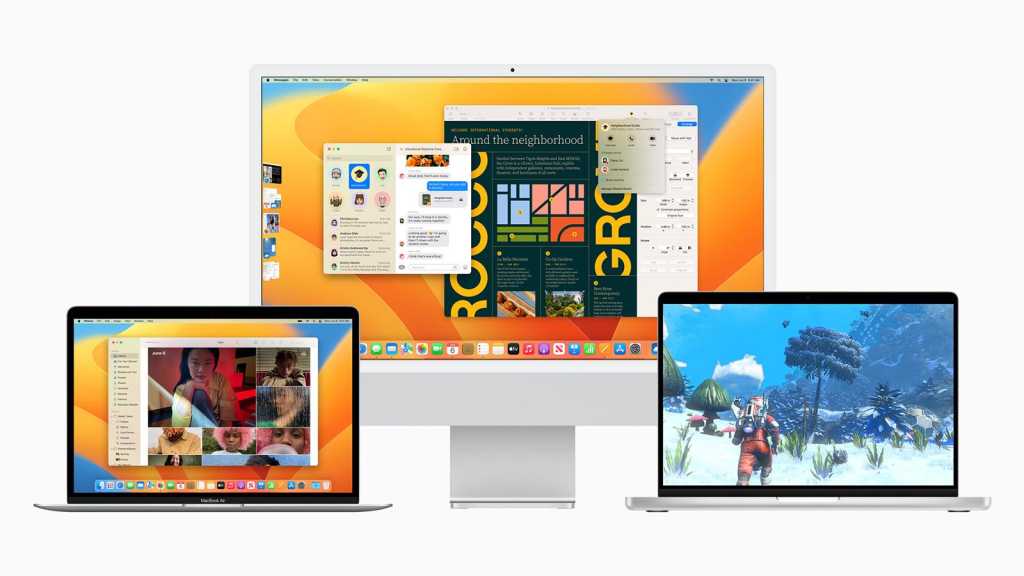 Apple announced macOS Ventura at its 2022 WWDC event, the version that will replace macOS Monterey on compatible Macs later this autumn.

It’s visually very similar in what is a careful iterative upgrade to a very slick operating system made only slicker by the M1 and M2 silicon Apple is now merrily shoving into all its new computers.

There weren’t any huge ground-breaking new features launched at WWDC in June, but you can be sure you’ll want to be downloading Ventura as soon as you can. Here’s everything you need to know about it, including when you’ll be able to download it and the key new features.

Apple revealed at WWDC 2022 in June that macOS 13 will be known as macOS Ventura, foiling rumours that it was going to be called Mammoth.

The tech giant said it was inspired by the city of Ventura, California, continuing the naming convention of place names after last year’s Monterey.

When will macOS Ventura be released?

The developer and public betas for macOS Ventura have been available to download for testing for the past few months, but what about an official release?

We’ll be sure to update this section with a specific release date once it’s confirmed by Apple.

macOS 13 Ventura supported devices: which Macs will support it?

While macOS isn’t quite on par with iOS devices when it comes to supporting older devices – particularly when it comes to some specific features – Apple does try to bring new versions of macOS to as many Macs as possible. That said, this year’s update drops support for any Mac older than 2017, while last year’s Monterey supported some early 2015 models of MacBook Air and Pro, and the 2013 Mac Pro, so it’s a particularly aggressive year for Apple.

Apple could stop supporting Intel-based Macs in the near future with its transition to Apple Silicon almost complete, but we don’t see it happening anytime soon, especially as Apple itself has committed to releasing new versions of macOS for Intel-based Macs “for years to come”. However, there could be differences in the features available. It’s entirely possible that the comparatively low-powered Intel-based Macs simply can’t power some of the new features in the works.

Here’s a complete list of supported devices for macOS 13 Ventura:

There will be tons of under-the-hood improvements that developers will be able to take advantage of to bring you bigger and better apps in macOS Ventura, but Apple used the WWDC virtual stage to show off some of the biggest changes that most people will notice and use. Here they are.

To help with multitasking and multiple windows, macOS Ventura will introduce Stage Manager. To be used in tandem with Mission Control, which displays all your open windows in a big grid with a swipe up, Stage Manager brings one app front and centre and puts your other open apps as tabs off to the left. You can click on an app at any time to bring it into the centre to work in it, encouraging quicker multitasking.

Apps with multiple instances can be cycled through by clicking the stack, which seems a little awkward, and you can group apps together and display them centred and overlapped.

Apple has updated its Spotlight search function to be better, basically. You can now peek at a result by tapping the space bar to see if it’s the right thing for starters.

Image will now mix photo library results with web searches, and you’ll be able to search text in those images too. Spotlight will also be cleverer and be able to start times, run Shortcuts, and perform other tasks. The box for the feature itself has also grown to use a full window to show more information.

Email is still very popular but also quite old school. Mail is adding undo send, scheduled send, and message reminders so you don’t forget about emails you’ve received. That’s great, but these are features many mail clients, Gmail included, have had for several years! Better late then never, though.

Search has been overhauled akin to Spotlight on the Mac, and promises to show recent attachments, links, and other media rather than just searching the text in emails.

Apple’s much-loved browser now has Shared Tab Groups which do what it sounds like they do: allow grouped tabs to be shared with others to collaborate and view together remotely. Every user can add tabs to the group and it shows who is viewing them live. You can also FaceTime and use iMessage alongside the tabs to chat about whatever it is you’re plotting.

Perhaps more essential is the introduction of Passkeys, a new way to create passwords that Appel says might be good enough to replace text passwords. It certainly sounds clever: rather than make up a weak password, Passkeys uses TouchID or FaceID on your Mac to create a unique digital key that is only used for that site or service.

This key doesn’t leave the device, and Apple says it can’t be leaked or hacked in any way as it’s never stored on a remote web server. The keys are synced across Apple devices like iPhone, iPad, and Apple TV using Keychain, so you won’t have to create multiple passkeys for the same service.

You’ll even be able to use an iPhone to sign into services on other platforms like Windows.

Continuity is already one of the downright most useful Mac features, letting you copy text on one device and paste it to another, or move what you were doing in an open app to another. That’s now possible with FaceTime so you can move your conversation from Mac to iPad to iPhone without dropping a connection.

But possibly the coolest demo of all of WWDC was for Continuity Camera, which allows you to wirelessly use your iPhone as a webcam for your Mac or MacBook using just a clip-on accessory that attaches the phone to your computer.

It wirelessly detects what you want to do and launches the webcam function automatically, taking advantage of the rear cameras of the iPhone. It then uses the superior lenses and software smarts to let you adjust lighting and blurred backgrounds artificially.

If the real thing works as well as the demo we will be impressed. Using the wide-angle camera of newer iPhones, a Desk View mode also shown off cleverly creates a top-down view overhead angle to pair with the face on view for demos and showing what’s in front of you on your desk to whoever you’re talking to.

Apple valiantly tried to make gaming on the Mac look attractive by bigging up Metal 3, the latest version of the software that gets games running on Mac. No Man’s Sky is coming to Mac, as is Resident Evil Village. They will take advantage of MetalFX Upscaling to render complex scenes faster.