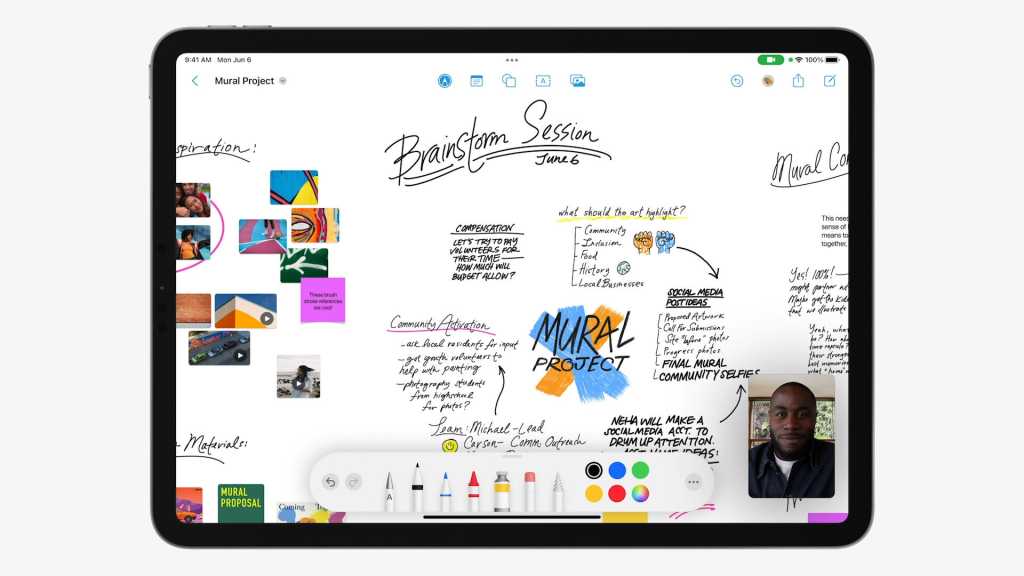 iPadOS 16 is coming this autumn with a whole host of new features: improved multi-tasking, new collaboration tools, and most important of all, its very first weather app.

While we’re still a few months away from the official launch of iPadOS 16, but Apple has now revealed the software update’s key features and confirmed all the details of the official beta for those brave enough to try the update out ahead of release.

Here’s everything there is to know right now, from release date and beta details to the confirmed features coming in iPadOS 16.

When will iPadOS 16 be released?

Apple has confirmed that iPadOS 16 will launch in “fall” (or autumn, if you prefer) this year, so that should give you a rough idea.

If you want something more specific, iPadOS 15 was released in September 2021, so it’s a safe enough bet that iPadOS 16 will launch in the same month this year alongside iOS 16 – which will of course launch alongside the iPhone 14.

How to get the iPadOS 16 beta

While the full launch will be later this year, iPadOS 16 is already available in beta form.

The software launched in a developer beta on 6 June, the day it was revealed at WWDC 2022. If you’re not a dev, the public beta will kick off some time in July, when it will be open to anyone willing to risk their iPad to try it out.

If you are a dev and want to try it out, then simply follow the steps in our guide to installing the iOS 16 beta, as the steps for an iPad are essentially identical. 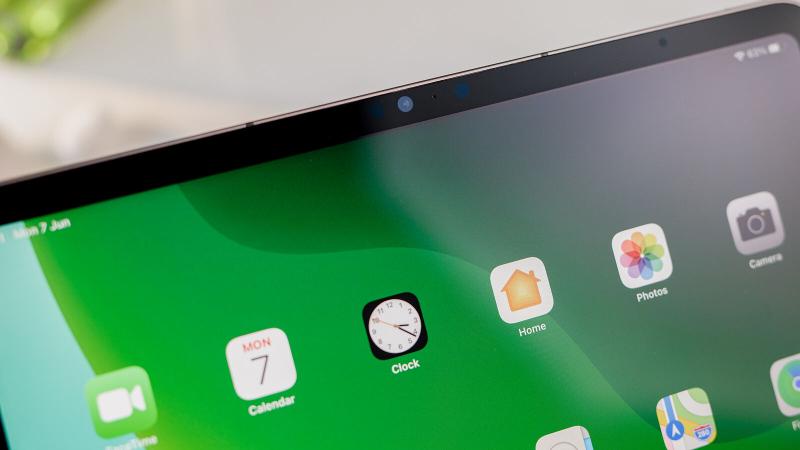 Which iPads will support iPadOS 16?

Apple has now confirmed exactly which iPads will be able to run iPadOS 16.

The good news is that if your iPad currently runs iPadOS 15 then you can almost certainly upgrade. In fact, only two models have been dropped: the 4th gen iPad mini and the 2nd gen iPad Air.

What are the new features in iPadOS 16?

The next iPad-focused software update could be a big one for pro users, with major changes to multi-tasking and a few M1-specific software tricks. 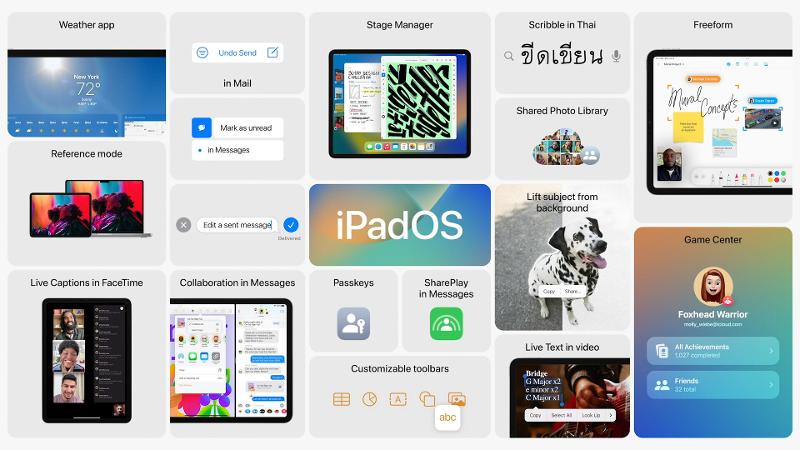 Of course, it also benefits from many of the changes made to iOS 16. Here are a few of those in brief, but check out our full iOS 16 rundown for more detail:

Now let’s get onto the new features that are more core to the iPad experience.

Collaboration was a major theme of Apple’s iPadOS 16 announcement.

For one, collaboration tools have been integrated directly into Messages, so that you and a Message group can work directly together across Files, Keynote, Numbers, Pages, Notes, Reminders, and Safari, as well as third-party apps. 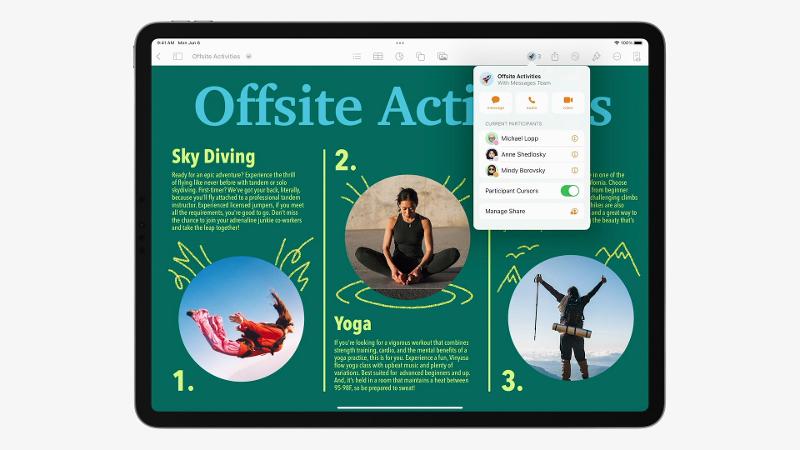 You can share a document with a whole Message group at once from within compatible apps, which will share it to every member. It’s designed to be quick to jump from that app direct into the chat group or even start a FaceTime call too.

Changes to shared files are shared in the Message group so that you can keep up to date on changes even when you’re not in the file yourself. And you can even share the new Safari tab groups, opening a browser window together – even letting you see which tab other people in the group are looking at.

All of these tools are taken to the next level in Freeform, a new app that will launch alongside the OS update later this year. 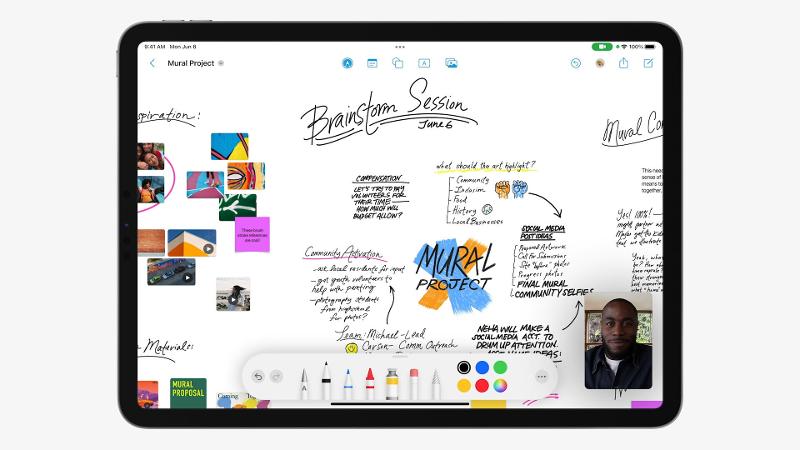 Freeform lets you work across an enormous collaborative whiteboard. You can write or draw anywhere on it, and even pin images, videos, audio files, PDFs, and more. Freeform will launch on iPads, along with iPhones and Macs.

The iPad is great for multitasking, with split-screen and floating window support, but Apple hasn’t done a great job of advertising the tech within iPadOS. It took steps to fix this issue with iPadOS 15, introducing a new icon when browsing iPad apps that lets you activate the split-screen functionality, but Apple isn’t done just yet. 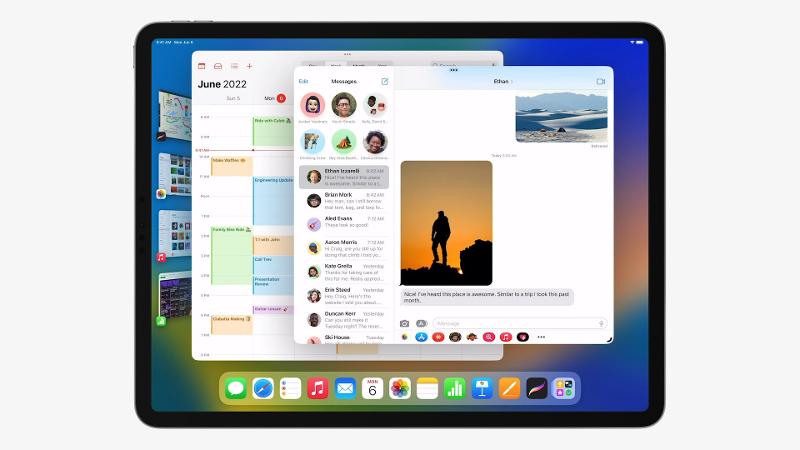 At WWDC the company introduced the new Stage Manager view, which will arrive on both Macs and iPads this year – though only those with the M1 chip inside.

It’s more than a little reminiscent of Microsoft’s Windows software if we’re being honest, allowing you to open a single piece of software in full-screen while all of your other apps are tucked away. Curiously they sit on the side of your screen, in addition to the Dock along the bottom, so it will make things a little cramped.

The multi-tasking bit is that up to four windows can be grouped together in overlapping windows of adjustable sizes, allowing you to focus on those while keeping your other software ready and waiting – but not distracting. 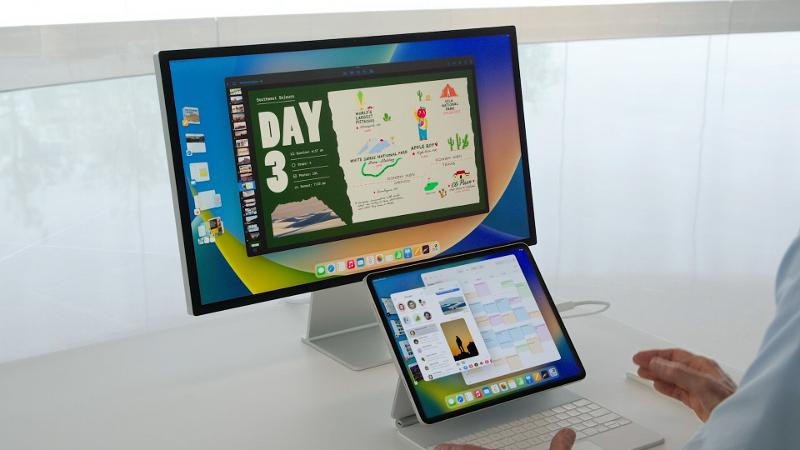 Importantly for Pro users, Stage Manager also supports external displays. And not just mirroring – you can actually run separate apps on the display to those on the iPad screen, theoretically allowing you to run as many as eight windowed apps simultaneously.

Reference Mode is specific to the 12.9in iPad Pro with a Liquid Retina XDR display, and allows it to match the colour requirements in workflows colour grading and compositing. 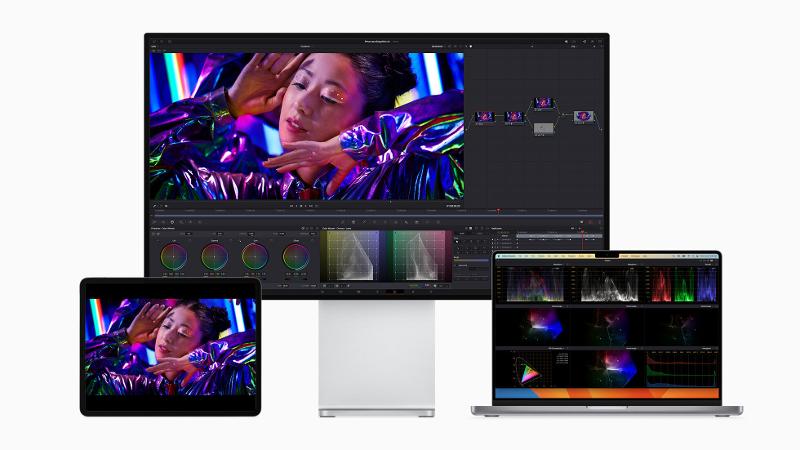 Display Zoom is powered by the M1 chip, and lets you increase the pixel density of the display, essentially letting you view more in your app windows – ideal for split-screen multi-tasking.

Finally, Virtual Memory Swap can re-allocate up to 16GB of storage to serve as make-shift RAM for demanding apps – again, only for the M1. This feature is widespread on Android devices, where the actual performance gains are questionable, but perhaps Apple has found a way to make it more effective.

Designed to appeal to pros, though not exclusive to them, these updates are all about bringing iPad apps in-line with their Mac equivalents. 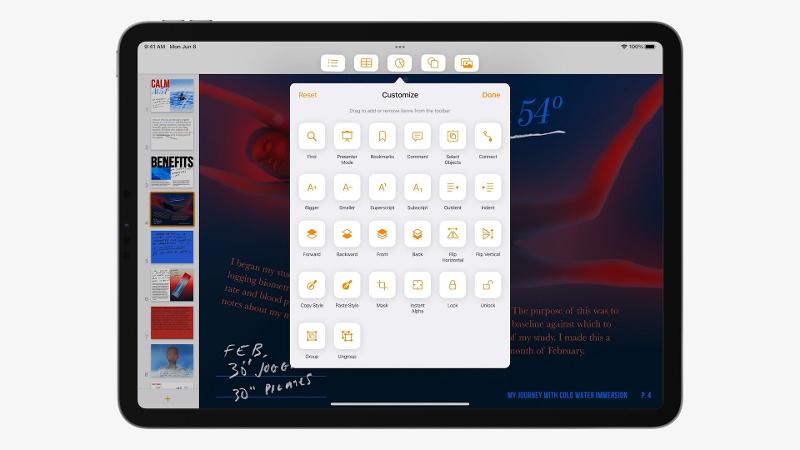 Apple has instituted system wide changes so that iPads will offer desktop-style undo and redo, in-line find-and-replace, customisable toolbars, and the ability to change file extensions – among much more.

This isn’t about specific small changes, and more about a sweeping move to give the iPad more of the capabilities and software of Macs, so it feels less like an iPhone with a big screen.

Here’s one you didn’t see coming: after years without, the iPad is finally getting an official Weather app. 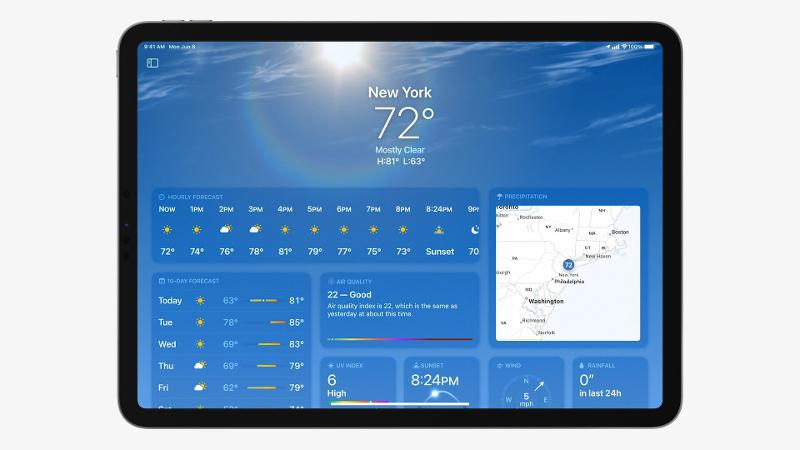 With forecasts, weather maps, and alerts for severe weather or air quality disruptions, the app has all the important features you’d expect. It also boasts the same detailed animations to illustrate the forecast live.

Apple is trying to improve gaming on iPads too.

For one, iPadOS 16 is gaining support for Metal 3, the new graphics API the company is simultaneously rolling out on Macs. It claims this will enable iPads to play much more demanding games than ever before. 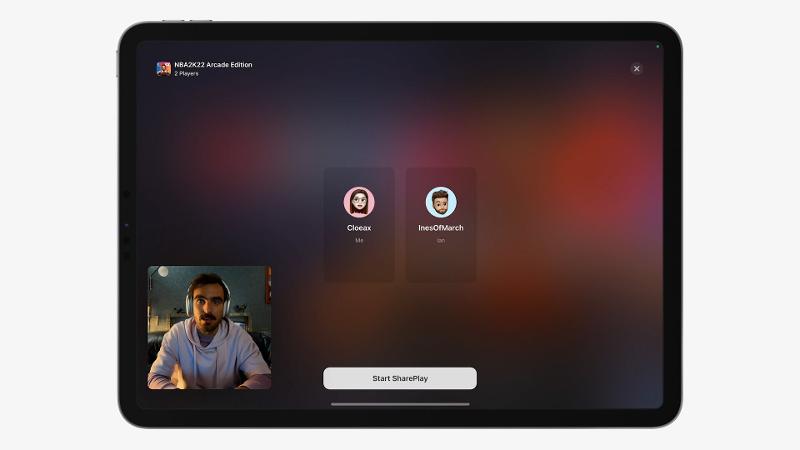 SharePlay is also being extended to gaming, with the Game Centre now allowing you to invite friends to launch a game with you, together with live messaging or Face Time calls.

There were some iPadOS 16 features we expected to see but didn’t. Will these turn up later on in the beta, or not roll out until next year’s version 17?

Apple gave the Lock Screen on the iPhone a major refresh, with customisable designs and a slew of new widgets.

The only problem? It never confirmed that we’d see those new elements on iPads too. There’s no mention of the updated lock screen in the iPadOS 16 press release, nor are there any images of an iPad with a new lock screen. Hopefully that’s a marketing oversight and the feature is included, but it may be that iPad owners will have an extra year – or more – to wait for the same lock screen perks now found on iPhones.

Those new lock screen widgets are also the iPhone’s first ever interactive widgets, allowing you to interact with widget shortcuts like a torch or media controls without being taken to the app in question.

Again though, there’s no sign yet that these are included on the iPad version of the software. It’s hard to believe Apple would miss it out, but so far that does seem to be what’s happened.

It was suggested that the redesigned app icons were coming to iOS 16 and iPadOS 16.

The redesigned first-party app icons are allegedly in development by Alan Dye, VP of Human Interface Design at Apple, and his team. While there were never any concrete details about what to expect from the redesigned icons, it has been said that they’ll be “very similar” to the macOS Monterey icons.

That could manifest as a modern take on the original skeuomorphic iOS app icons that had more depth and texture than the colourful icons of late, and the general iPadOS UI could also get a refresh to match.

What are you most looking forward to in iPadOS 16? Let us know on Twitter.