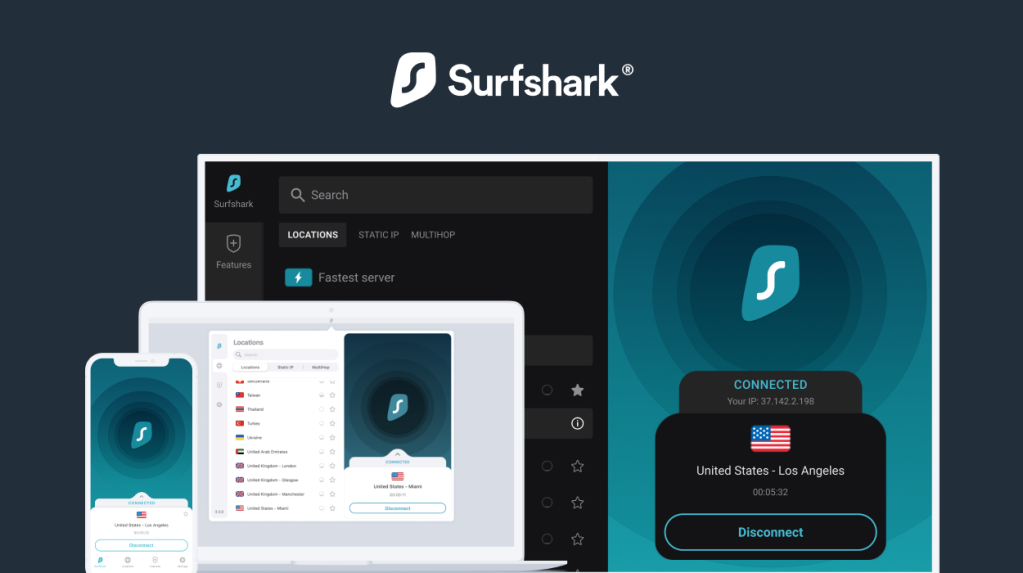 If you’re looking for a VPN deal, you’re already spoilt for choice. Discounts are easy to find, but picking the best VPN service isn’t quite as simple.

There are so many services to choose between, but here we’ll explain why you should take a good look at Surfshark.

Surfshark, like all VPNs, encrypts the information going between your device – a laptop, phone or even TV – and the internet. This means it’s gibberish to anyone trying to look at it, and this helps to keep your activity private.

No-one wants their emails, the websites they visit and the web searches they make to be seen by others, whether it’s their internet service provider, other companies or individuals. And that’s why a VPN can help.

Surfshark can also let you watch videos and access websites that are otherwise blocked because you’re not in the right country. For example you could watch videos only available on US Netflix and Amazon Prime even if you are in a different country.

This is because it has VPN servers in many countries around the world. Choose one from the list and press the button: that’s all you need to do to obscure your true location and appear to be in the country you chose.

On the surface, all VPNs can seem the same but Surfshark offers a few great features that other services do not.

1 It banishes those annoying consent popups

The first is its cookie popup blocker. This removes those annoying GDPR consent popups which appear every time you visit a website in the EU. Fundamentally, they’re a good thing because they give you control over the data you’re handing over.

However, we’re willing to bet that you’ve stopped reading them and just click whichever button makes them go away. The cookie popup blocker deals with these by hiding, blocking or – if those fail – consenting so that you never have to see one again.

Reading some web pages can be a challenge due to the number of adverts. But with Surfshark’s Cleanweb feature enabled, you’ll see far fewer adverts breaking up your enjoyment of the web. That’s not all, though. Most websites use trackers which watch your activity and then show ads based on products you’ve looked at.

Cleanweb blocks these, again giving you more privacy and, as the name says, a cleaner web.

3 It better protects your identity

Using a VPN server is good, but using two is even better. And that’s what happens when you use one of Surfshark’s MultiHop combinations. These all route your connection through servers in two different countries, such as Netherlands > United States.

This provides an extra layer of security and privacy that’s really effective at obscuring your real location and identity.

Of course, there are many more than three reasons to choose Surfshark: the fact it doesn’t place a limit on how many devices you use it on at the same time, the fast speeds its servers offer and the wide range of devices it supports including iPhone, Android, Windows, Mac, Amazon Fire TV Stick and more.

Much more than a VPN, One is a new service from Surfshark which includes antivirus, identity protection (giving you an early heads-up if your details are leaked) and a private search tool that doesn’t log what you type or track what you do.

Get Surfshark at a huge discount

Right now you can get an amazing 83% off Surfshark VPN, plus three months free at the end of your subscription. That’s a huge saving over the usual price and you can get this deal on Surfshark’s website where you’ll also find out more information about the service.