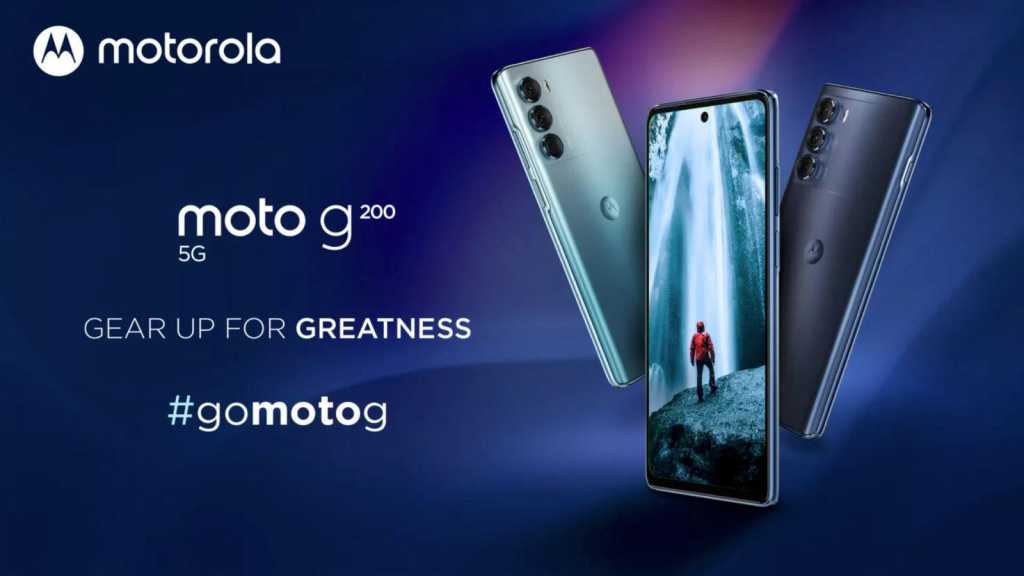 Motorola is no stranger to launching lots of phones at the same time. The company just announced a total of six new models in its affordable Moto G range, including the Moto G200. Despite starting at €449 (around £379 / US$500), it has a feature you’d usually associate with handsets twice the price – the Snapdragon 888+.

This is still Qualcomm’s most powerful processor for phones, even if its successor is on the way soon. This makes the Moto G200 one of the cheapest Snapdragon 888+ phones you can buy. Motorola pairs it with a healthy 8GB of RAM and 128- or 256GB of storage. Performance, then, should be excellent.

But the impressive specs don’t stop there. There’s also a 144Hz display – that’s the highest refresh rate you’ll find on any phone, aside Red Magic gaming handsets. This extra-smooth experience helps the G200 stand out from the crowd, especially at this price.

A slight compromise here is that the 6.8in FHD+ (1080×2460) screen is LCD and not OLED, but this should help the battery last longer. The G200 packs a 5000mAh cell, something that’s consistent across all six new phones. You also get fast wired charging at 33W.

Cameras are also a major focus (if you’ll forgive the pun). There’s an eye-catching 108Mp main sensor but, as we’ve seen from other phones, this doesn’t guarantee better photos. It remains to be seen how effective the software processing will be.

It’s joined by more conseravative 8Mp ultrawide and 2Mp depth sensors, while there’s a 16Mp selfie camera on the front, as a punch-hole in the middle of the screen.

Build quality is the only other noticeable trade-off – the Moto G200 has a plastic back and frame. The fingerprint sensor is also side-mounted, rather than built into the display. It runs Android 11, but an update to Android 12 is supposedly on the way.

If these promising specs translate well into real-world usage, the G200 will be a force to be reckoned with among mid-range phones. However, specific release dates for all six new phones aren’t yet known.

If you’re looking for something more affordable, Motorola also has you covered. The Moto G71 drops the price to €300 (around £250 / US$340) and uses the Snapdragon 695, but still has 5G support. It has a 6.4in FHD+ AMOLED display at 60Hz, alongside triple rear cameras (50Mp main) and 30W fast charging. However, it’s expected to be limited to India, Latin America and the Middle East.

The €230 (around £200 / US$260) Moto G51 retains 5G support thanks to the Snapdragon 480+, while it also has the same camera system as the G71. The FHD+ LCD display is back up to a 120Hz refresh rate, although it can only charge at 10W. It’ll arrive in Europe first, before being made available in other continents (excluding North America).

At €250, the Moto G41 makes some sacrifices. It uses MediaTek’s Helio G85 to power a 6.4in, Full HD+ OLED display at 60Hz. The main camera is now 48Mp but does include optical image stabilization (OIS). Charging speeds are also back up to 30W. An initial European launch will be followed by availability in Latin America and the Middle East.