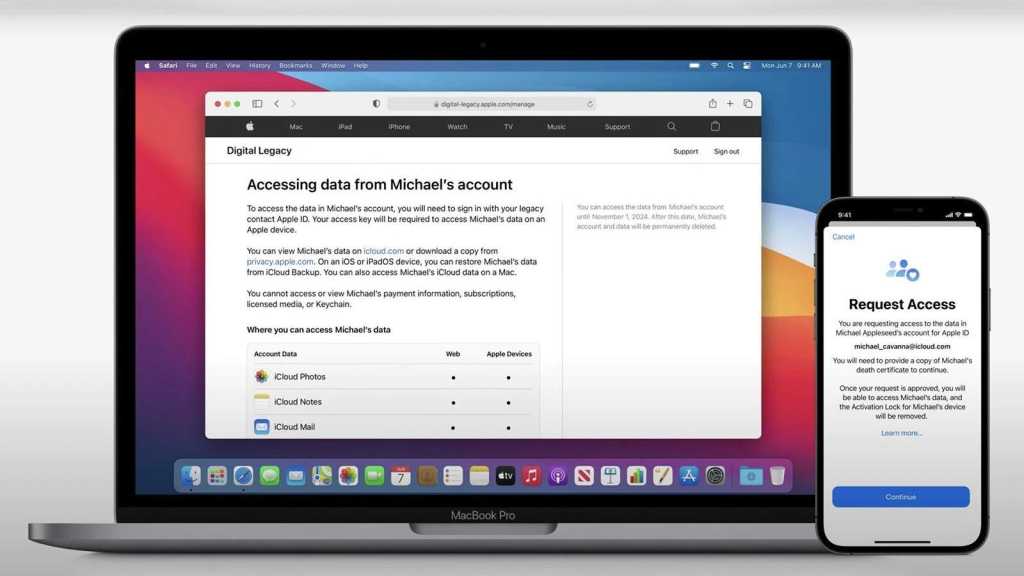 With so many photos, videos and other digital memories stored on our iPhones, it’d be a shame for it all to be lost to the sands of time, locked behind an impenetrable wall of digital security, once you’ve passed away.

That’s where Apple Digital Legacy comes in; it’ll allow up to five trusted friends or family members access to your digital data after your death. It was announced back at WWDC 2021 in June, and after months of internal testing, it looks like the feature could be ready to roll out soon.

Here’s everything you need to know about Apple Digital Legacy, including how to set it up, how to make a request and the kinds of data your loved ones will be able to access.

What is Apple Digital Legacy?

In its most basic form, Apple Digital Legacy is a new service that’ll allow access to your iCloud data to approved family and friends in the event of your death. Apple will allow you to choose up to five ‘Legacy Contacts’ to link to your Apple ID.

In the event of your death, those Legacy Contacts can get in touch with Apple and gain access to your photos, videos, email and other digital data.

It’s not quite as simple as sending an email though – we’ll explain more below.

When will Apple Digital Legacy be available?

While Apple Digital Legacy was announced at the reveal of iOS 15, the company hasn’t yet shipped the functionality to consumers.

It’s fairly normal for companies to do this if the feature isn’t quite ready – Apple delayed SharePlay to iOS 15.1 for the same reason – but the good news is that Apple is testing it in the iOS 15.2 developer-only beta, suggesting we could see the functionality rolled out as part of iOS 15.2.

When should we expect iOS 15.2? It’s a little unclear right now, as the time between Apple’s ‘point’ updates tend to vary. If we measure the time between iOS 15 and 15.1 – a period of 5 weeks exactly – and apply that to iOS 15.2, we should expect it to drop on or around 29 November 2021, but that’s unconfirmed right now.

How to set up Legacy Contacts

Of course, with the functionality still in active development in the dev-only iOS 15.2 beta, the steps may change by the time it’s rolled out worldwide. But, if you’re on the iOS 15.2 developer beta, here’s how to set up your Legacy Contacts:

You’ll then need to let your Legacy Contacts know that you’ve chosen them, and share the access key generated during setup. The contact will have to either accept or decline the invitation before anything else happens.

If they accept, and the invite was shared via the Messages app, a copy of the access key will automatically be stored in the contact’s Apple ID for easy access later on. If, however,  the nominated contact declines the invite, you’ll be made aware so you can choose somebody else instead.

If you don’t like the idea of loved ones storing something as valuable as an access key to your data on their smartphones, you’ve also got the option of printing the access key, saving it as a PDF and password-protecting it or even including a copy of it with your will. It’s totally down to you.

If you want to access a loved one’s data after their passing, you’ll be able to submit a request via the dedicated Apple Digital Legacy portal.

You’ll need the Legacy Contact Access Key mentioned earlier, as well as a copy of the person’s death certificate to prove that they are deceased. We don’t want people accessing the private data of people still alive, after all…

Once the request has been approved by Apple, you’ll be able to access their personal data via iCloud.com on an iPhone, iPad or Mac, or alternatively, you can download a copy of their data via Apple’s privacy portal. You can even restore their data from an iCloud backup to an iPhone or iPad if you prefer.

Granting access will also remove the Activation Lock on their iOS devices, allowing you to wipe them and use them yourself (or sell them on, or do neither – it’s totally up to you).

What data will my loved ones be able to access?

While Apple will grant access to your data after your death, it’s not everything associated with your Apple ID.

Your loved ones will be able to access key data including messages, photos, videos, notes, emails and iCloud backups, but they won’t be able to access sensitive data like payment information, subscriptions, licensed media or Keychain passwords.

Will the data be stored in Apple’s servers forever?

While you might imagine your data will be kept safe on Apple’s servers indefinitely, that’s not the case. Once you submit a Digital Legacy request, you’ll be given an expiration date.

Once that date passes, the Apple ID and all associated data will be permanently deleted.