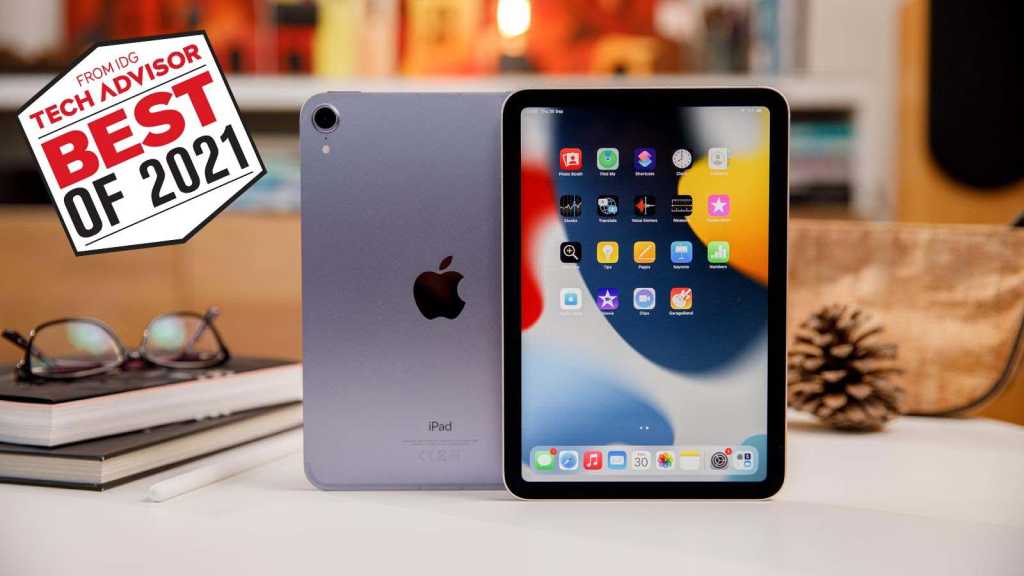 The humble tablet has come a long way in the past decade, fast securing its place in our everyday lives not just for playing games and browsing social media but creating content and even work. They’ve become thinner, lighter, more powerful, and with a bevvy of accessories available for most, they’re pretty versatile too.

Those qualities are perfectly exemplified by Apple’s sixth-gen iPad mini, our pick of Tablet of the Year 2021.

The iPad mini has always had a special place in our hearts; the 7.9in tablet offered a much more portable form factor than the original 9.7in iPad, and that only became more apparent when Apple began introducing larger iPads like the iPad 10.2, iPad Air 10.9, iPad 11 and iPad 12.9. Not everyone needs a big display, after all!

However, while most of Apple’s tablet range got semi-regular updates to keep them competitive, Apple’s iPad mini lay at the wayside in desperate need of some TLC. That was until September 2021, when Apple unveiled the sixth-generation iPad mini, offering the biggest redesign of the small-screen tablet since its inception.

It ditches the ageing iPad design for a full-screen experience akin to that of the iPad Air and iPad Pro ranges, allowing the display to jump from 7.9in to 8.3in without a change in overall dimensions. It’s not just bigger either, with the high-res display offering the best pixel density of any iPad – including the top-end Pro range.

As with the iPad Air redesign in 2020, the iPad mini sports a Touch ID sensor built into the Power button, and it made the jump from Lightning to USB-C too, offering faster charging speeds and a big jump in data transfer speeds.

The front-facing camera is much better than the iPad Air though; unlike Apple’s 10.9in tablet, the iPad mini features Centre Stage technology. Utilising a 12Mp 120-degree camera and onboard AI, the camera can crop in and follow you around the room on video chats, making video calls much easier and more natural.

Don’t assume that the small form factor means a lack of power either. In fact, the iPad mini has the most powerful chip in Apple’s non-Pro tablet range, rocking the latest and greatest A15 Bionic also present in the flagship iPhone 13 range. It’s a capable chipset that’ll handle just about anything you throw at it, be it high frame rate gaming or rendering video.

Throw in a variety of colour options, support for the second-gen Apple Pencil, all-day battery life and a lightweight design and you’ve got the perfect small-screen tablet.

It’s not the most capable tablet in Apple’s range, lacking Pro features like the Mini-LED 120Hz ProMotion display, Apple’s desktop-level M1 chipset and support for the Magic Keyboard, but the iPad mini experience is more than enough for the average user – especially those that prioritise portability over sheer power.

If you’re tempted to pick one up, you can buy the iPad mini at the following retailers right now:

Of course, it wasn’t easy picking a single tablet for our award, so it’s only right to include a few that almost made the cut. These are great tablets in their own right, but like with most tech, it’ll largely depend on how you intend to use them.

Apple also reinvented the top-end iPad Pro range in 2021. This year’s update brought the Mini LED display to the larger iPad Pro 12.9in, allowing the screen to get much brighter than ever before, and both that and the iPad Pro 11in are now powered by Apple’s desktop-level M1 chipset. Combined with everything else we love about the iPad Pro – the design, the 120Hz ProMotion tech, the accessories – it’s the perfect option for those looking for a work-focused tablet.

The Xiaomi Pad 5 is exciting because it feels like a true Android competitor to the iPad. It sports a slim-bezelled design with a high-res 11in display, stereo speakers, a flagship chipset and more. It’s a little more expensive than the entry-level iPad, and there’s still much work to be done on Android’s tablet optimisation, but it’s one of few viable Android tablets on the market in 2021.

Finally, this year’s Huawei MatePad 11 is another solid contender. Sporting a high-res 10.95in display, a gorgeous high-end design and matching keyboard and stylus accessories, it looks the part, and is now powered by the company’s own HarmonyOS operating system – though you still won’t get Google support.