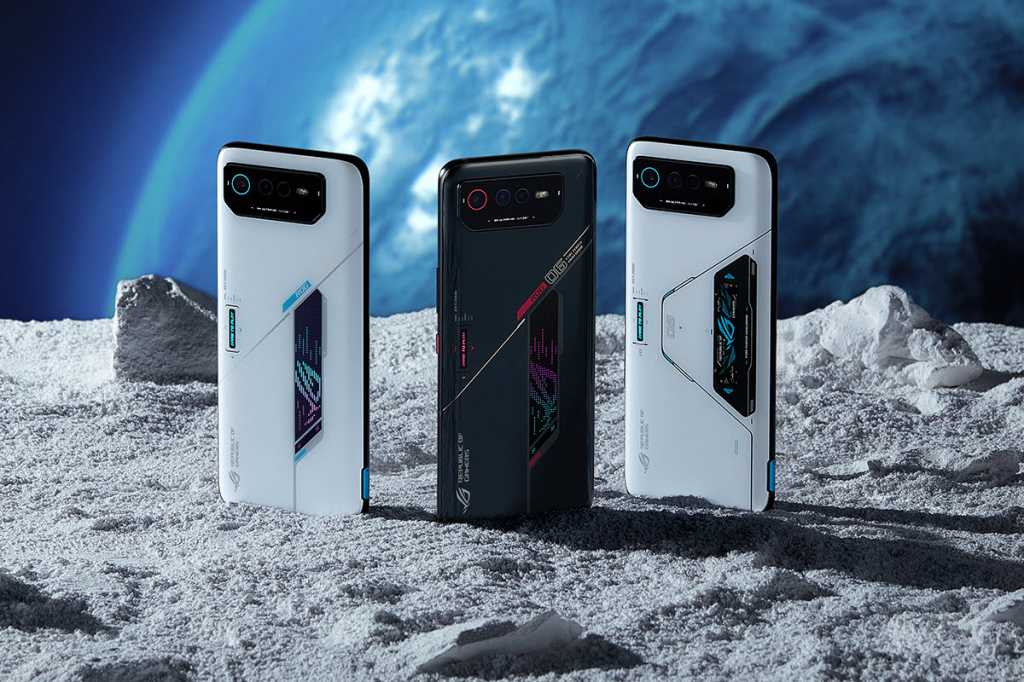 After months of speculation, Asus announced the ROG Phone 6 and 6 Pro in July. The company’s flagship gaming phones include all the premium features we’ve come to expect, but that was just the beginning.

Just weeks later, we saw two new ROG Phones: the 6D and 6D Ultimate. These are designed as alternatives to the 6 and 6 Pro rather than replacements, with a chipset change from Qualcomm to MediaTek the headline news. However, there’s also a brand-new cooling feature exclusive to the 6D Ultimate.

But, as it turns out, Asus wasn’t done there. We’ve already seen Batman versions of the regular 6 and 6 Pro, and now the former is available with a design inspired by the Diablo Immortal. Here’s everything you need to know.

The ROG Phone 6D and 6D Ultimate then launched at a separate event on 19 September, and both are available to buy in the UK. However, they’re not currently available in the US:

We’ve also seen a couple of special editions of some phones. That includes MediaTek and Snapdragon-powered Batman models in September, and a ROG Phone 6 inspired by the Diablo Immortal game in November.

All the ROG Phone 6 Series handsets are premium devices, and that’s reflected in the prices:

The ROG Phone 6 and 6 Pro are undoubtedly high-end smartphones, and that’s reflected in the top-of-the-line specs available on both phones.

For most people, the main upgrade is a move to the brand-new Snapdragon 8+ Gen 1 chipset on both phones. Compared to the Snapdragon 888+ in the ROG Phone 5 Series, this a two-generation jump. Not only is performance significantly better, there’s a big improvement to power efficiency.

Gaming on such a dynamic display inevitably affects battery life, but Asus has stuck with the same 6,000mAh cell as before. However, the jump from 144Hz to 165Hz doesn’t have a big effect on the excellent battery life we saw in the ROG Phone 5s Pro. You also get a 65W charger included in the box.

The ROG Phone 6 and 6 Pro both have identical camera setups. That means a 50Mp main, 13Mp ultrawide and 5Mp macro lens on the back, plus a 12Mp front-facing camera. The latter can be used for face unlock, but you’ll probably rely on the under-display fingerprint sensor instead.

Aside from more RAM, the only other difference on the Pro is the secondary ‘ROG Vision’ display on the back. It can be used to display the likes of battery percentage, incoming calls and info about any accessories you have connected. But unlike the Galaxy Z Flip 3‘s external screen, it can’t show your notifications. On the regular phone, there’s just a logo illuminated with RGB lighting in the same position.

The phones ship running Android 12, but Asus has introduced its usual range of gamer-specific software tweaks. It only commits to two major Android updates and two years of security updates, which suggests it’ll get Android 13 and and one more.

At 228g, the 6 and 6 Pro are among the heaviest handsets you can buy. This can be increased further by connecting a wide range of accessories, including the Kunai 3 gamepad and AeroActive Cooler 3. However, these are optional extras which need to be purchased separately.

Functionally, the Batman Edition is identical to the regular ROG Phone 6. The changes are purely aesthetic, with a custom rear design, various software tweaks and a new case included in the box. You also get a Batman-themed SIM ejector tool and LED that can project the iconic logo onto any surface.

The same can be said for the Diablo Immortal Edition, which includes what Asus is describing as a “flame effect finish”. As you move the back of the phone, it gives the impression of flames moving across the device.

You also get the usual matching accessories, which this time include a case and map featuring invisible ink. Even the SIM ejector tool has been give a Diablo-themed makeover.

The 6D and 6D Ultimate have lots in common with the regular 6 and 6 Pro. So, what’s actually different?

There are two key changes worth highlighting, but only one applies to both phones. The 6D and 6D Ultimate are powered by MediaTek’s Dimensity 9000+ chipset, as opposed to the Qualcomm Snapdragon 8+ Gen 1. The 9000+ is MediaTek’s most powerful chipset, but it remains to be seen how this will affect both performance and power efficiency, with the latter a particular strength of the 8+ Gen 1.

Asus combines this with up to 16GB of RAM on both phones, with no option for the 18GB found on the 6 Pro. However, that’s because it uses the faster DDR5X standard, which isn’t yet available above 16GB – performance is likely to benefit rather than suffer from this change.

Before the event, Asus said the 6D Ultimate would feature a new cooling system “that allows airflow unlike any ROG Phone before”. As it turns out, this is via a new flap on the back of the phone which Asus is calling an ‘Aeroactive Portal’. When the AeroActive Cooler 6 (which is included in the box with the 6D Ultimate only) is connected, this automatically opens to help improve heat dissipation. Compared to just the cooler, this is supposedly up to 20% better in terms of thermal efficiency, which is especially important for long gaming sessions.

Asus says the portal can last for over 40,000 opening and closing cycles, while it also has fall detection and a cleaning mode. IPX4 splash resistance is also retained on both phones.

The regular 6D continues with the same cooling system found on the 6 and 6 Pro, but that’s not a big issues issue – it was already highly effective. All phones also remain compatible with the AeroActive Cooler 6 and Kunai 3 Gamepad.

Like the other phones, it’s only the 6D Ultimate that gets the secondary ROG Vision display on the back. The regular 6D has an RGB logo in its place, just like the standard ROG Phone 6.

Aside from that, everything else mentioned with regards to the 6 and 6 Pro also applies here. That includes the visual changes on the Batman Edition of both, although the regular 6D does shift back to the Snapdragon 8+ Gen 1 in the US and Canada.

Take a look at our guide to the best gaming phones to see what the ROG Phone 6 Series is up against. The 6 Pro currently sits third in that chart, while the 6D Ultimate is eighth.