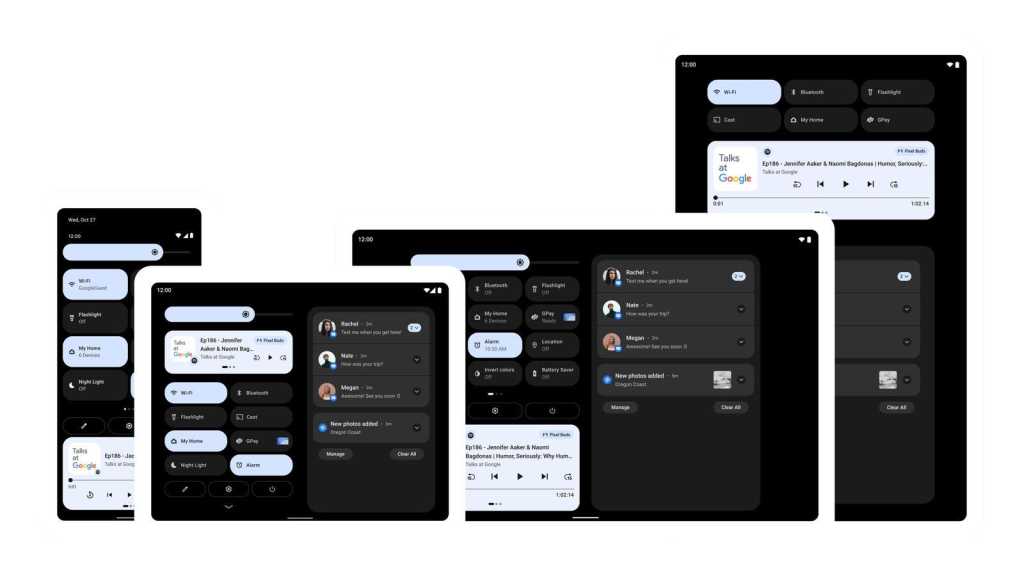 Android tablets could soon make a lot more sense. Google has announced an update to Android 12 specifically designed for big-screen devices, which also includes folding phones and Chromebooks. Known as Android 12L, it aims to make what is often a clunky experience a lot smoother, and make better use of the available screen real-estate.

The L, by the way, seems to stand for Large. But while Google doesn’t explicitly say so, it uses the word 39 times in its blog post, so it’s a safe bet.

Until now, most Android tablets feel like giant phones. But Android 12L makes several changes to the regular version of Android. For example, items on the home and lock screens, notifications and the quick settings menu will all be adjusted to make the most of the extra display.

On screens that have 600 density-independent pixels or more (which typically means screens 7in or larger), you’ll see a two-column notification shade and lockscreen. In the example below, the right side of the display is reserved for notifications, reducing the usual clutter on the other side.

A new taskbar on larger screens enables more powerful multitasking features. Android 12L supports drag-and-drop for easy split-screen. Both windows can be resized to your liking, although it’s not clear if two is the maximum or whether three or more apps can be used side by side.

The only other feature Google mentions is an improved letterboxing experience, which allows device manufacturers to make tweaks to the appearance of windows. This should help make apps feel more optimised for the device you’re using them on.

Aside from these features, Android 12L will retain the same core look and feel as Android 12. The approach is similar to what Apple has done with iPadOS, which adds a few extra features but is very much based on iOS.

Anyone with a compatible device can try Android 12L, but it’s only a preview for developers at the moment. A full release is way off. Google plans to release the new OS ‘early next year’, meaning 2022.

The company says this is timed to coincide with ‘the next wave of Android 12 tablets and foldables’, but it’s the latest indicator of a Google foldable being on the way soon. There are plenty of rumours suggesting the company is working on a Pixel Fold – could it launch around the same time Android 12L is released? Only time will tell.