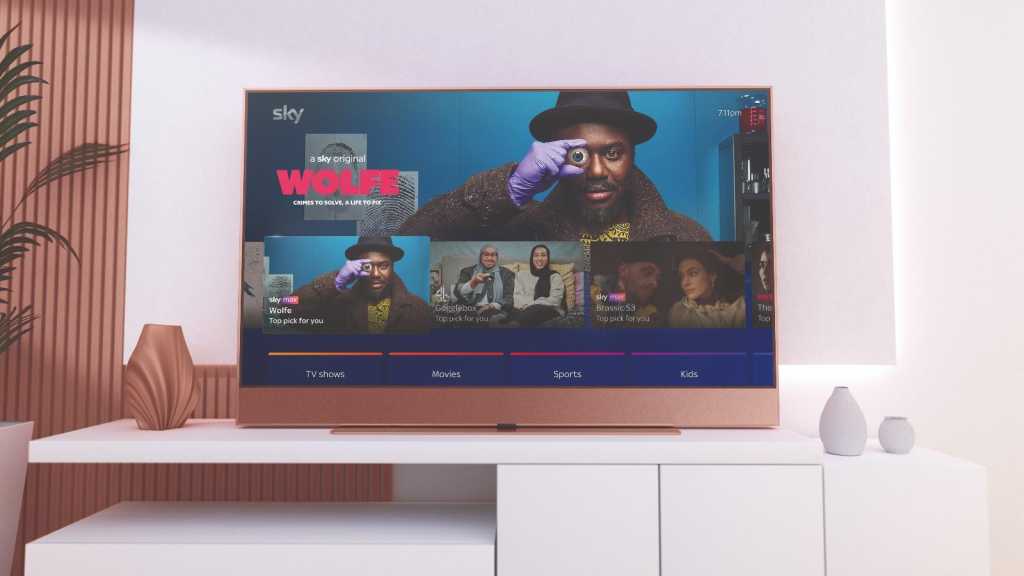 For the first time, Sky is going to sell its own TVs, called Sky Glass. Unveiled today at an exclusive event in London, the new device will feature Sky built-in, Quantum Dot technology and six Dolby Atmos supported speakers.

If this sounds like something you’ve heard recently, Amazon also announced it would sell its own-brand TVs but, currently, that’s only in the US. Read our full Sky Glass review.

When is the Sky Glass TV release date?

For those in the UK, there’s not long to wait for Sky Glass as the TVs will be available from 18 October 2021 – as well as more European markets in 2022.

There’s a choice of three sizes: 43in, 55in and 65in, and can either be bought outright, or bundled in as part of a Sky contract.

How much do Sky Glass TVs cost?

Sky Glass can either be bought outright (for just the device) or be bundled into an entertainment package. To buy the TV outright, this costs £649 for the 43in model, £849 for the 55in model and £1,049 for the 65in model.

Alternatively, Sky Glass can be bought on monthly contracts starting from £13 per month, £17 per month and £21 per month for the 43in, 55in and 65in respectively. The contract lasts for either two years or four years, and you can pre-register your interest for Sky Glass on Sky’s website.

The cost of the TV doesn’t include entertainment. To get this, users will need to add a Sky TV package for £26 per month, which runs on a 31-day rolling contract. For the TV and entertainment package together, the prices start at £39 per month.

If you have additional devices in your home that you want Sky TV on, then you can add a hub on for £10 per month which can be used to stream Sky on other TVs and via mobile. Sadly, the TV will not work alongside Sky Q.

For future proofing, Sky also offers a regular swap feature, which is a similar scheme offered on Sky mobile. This means that customers can swap their model for an alternative model, or upgrade further down the line.

What are the specs & features of Sky Glass?

Sky Glass has an anodized aluminium frame and comes in a choice of five colours: black, pink, green, silver and blue. Each model has a 4K, 10-bit, 60Hz HDR panel with Quantum Dot technology. It supports Dolby Vision, as well as HDR 10 and HLG.

The panel itself is made by TPV, a manufacturer of several other TV brands. The company is also the parent of TP Vision, which operates independently by working solely on Philips TVs.

As well as great picture quality, audio should be impressive too. Sky Glass TVs have six, built-in speakers and, just like seemingly every other audio product right now, support Dolby Atmos.

These include three front-firing speakers (one at either end and one in the centre), two upward-firing speakers and a ‘subwoofer’ for bass. The design team believe that the audio is as good as an external soundbar.

The TV features glance motion technology, which means that it automatically turns on when you are in front of it. It also contains built-in voice support, so users can use the phrase ‘Hello Sky’ to turn on the TV, head to specific channels and control playback. 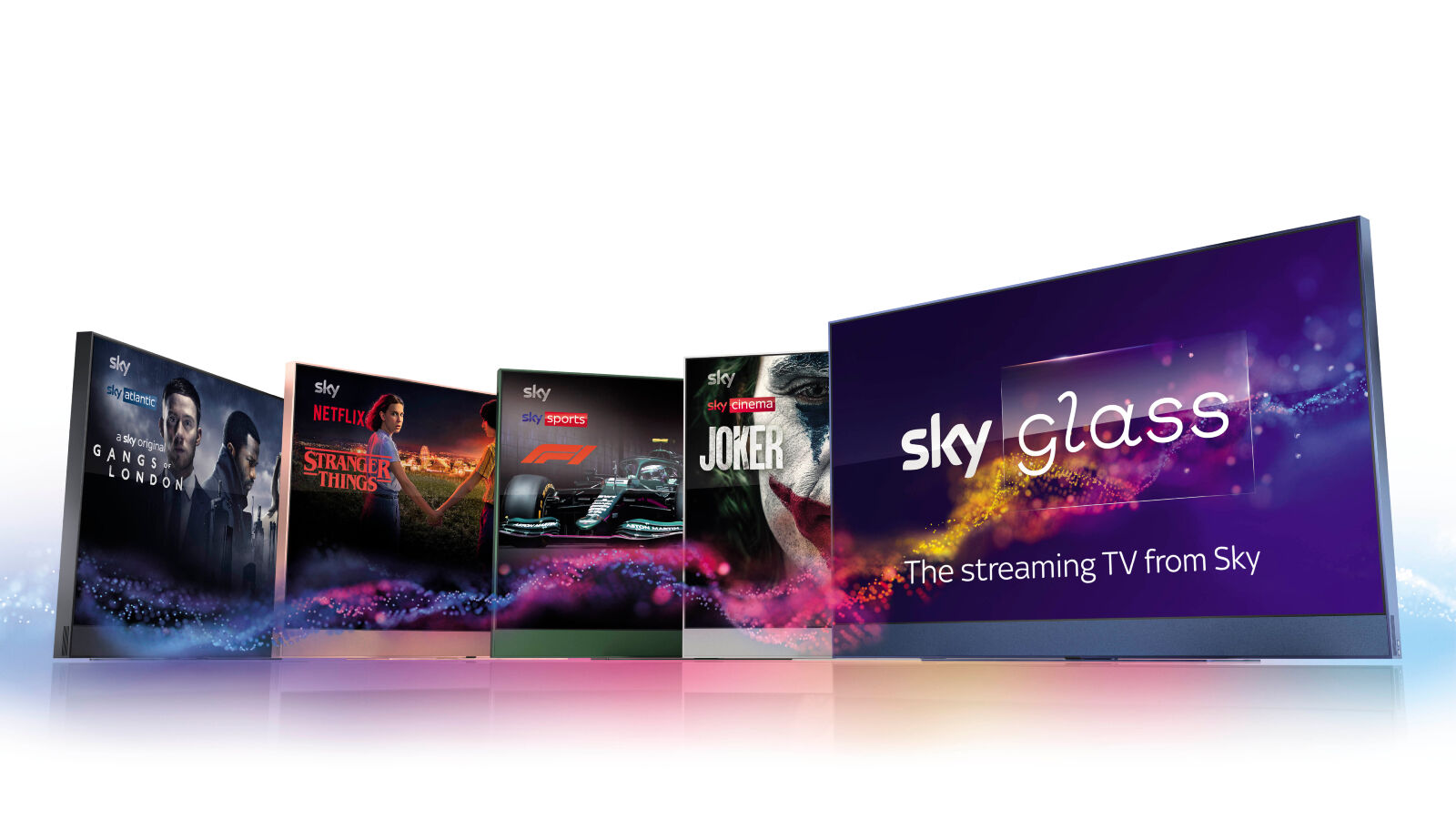 Sky Glass features a mounting bracket integrated into the TV, so it can be put either on the wall, or on a unit with the matching stand. There will also be speaker covers available for further customisation, which connect via magnets.

The TV communicates via Wi-Fi 6, with no box or dish needed, and features just one power cord. However, there are three HDMI 2.1 connections (including an eARC port), as well as an ethernet slot for a wired connection and Bluetooth 5.0 LE connectivity. 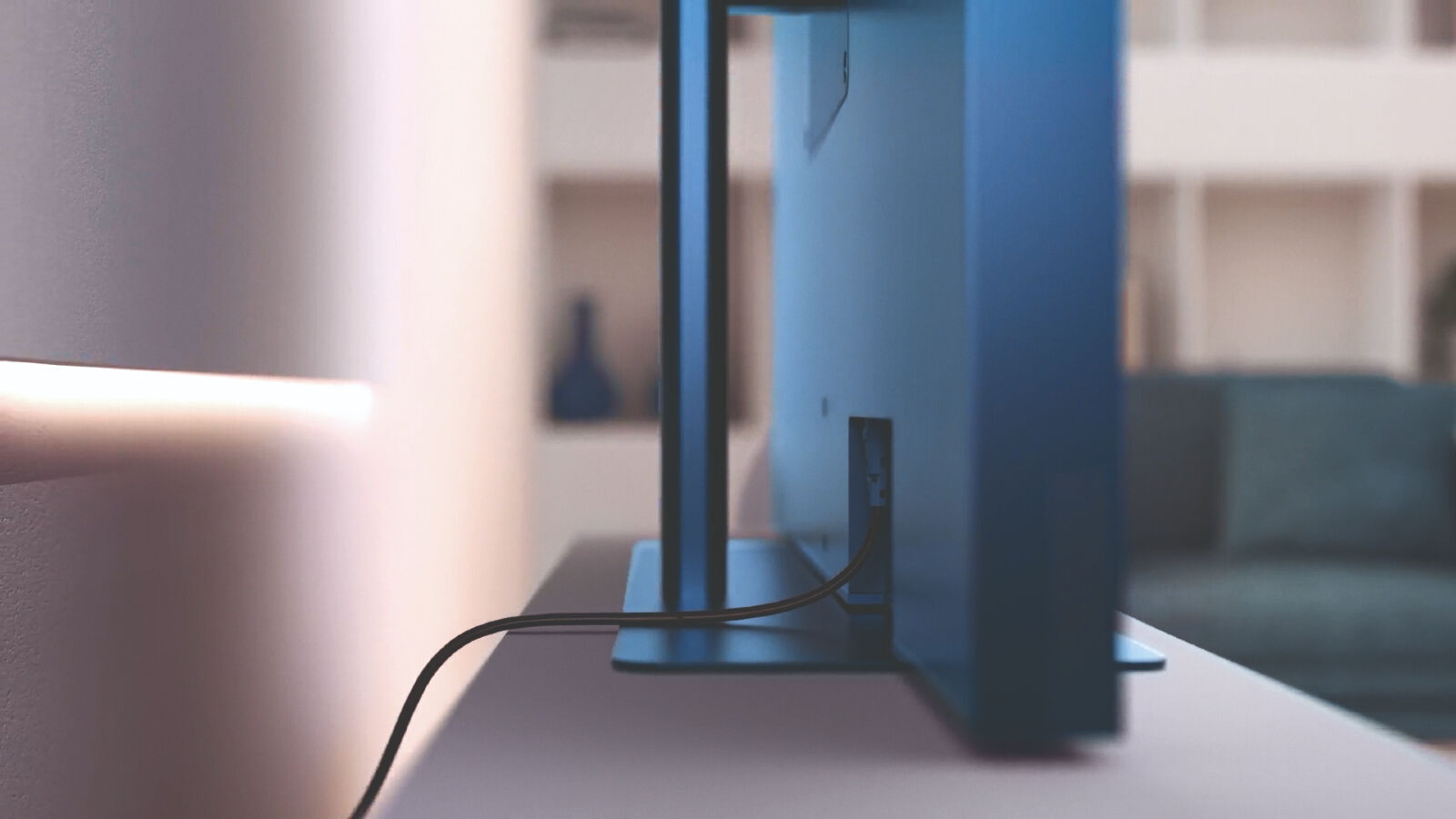 No need for a separate Sky box

Everything you need is built into the TV. You don’t need a satellite dish either, as all channels are streamed over a TV aerial or your broadband connection.

However, if you want Sky throughout the rest of your home on other TVs, then you’ll need the Sky Stream puck. This requires an upfront cost of £50 and £10 per month on top of your contract for multiroom.

The interface for Sky Glass integrates content from TV channels with on-demand shows from Netflix. Disney+ and others. The live TV guide can either be viewed in the standard format, or it can be customised by the viewers favourite channels. There are also sections dedicated to TV shows, movies and sports.

This interface also replaces the traditional TV menu, so all settings for the panel such as adjusting the lighting and sound will be accessed through here.

Playlists can be created using the plus button on the remote, which can record shows from the live TV guide, and pull in episodes from streaming services, all to watch in one place. There is no local storage on the TV – playlists will be replacing traditional recordings which are seen on the devices such as Sky Q.

Sky also claims that is the first TV to be certified carbon neutral, and allegedly uses 50% energy than a TV connected a box with a traditional soundbar.

The new Sky remote matches the colour of the TV, and has fewer buttons than past remotes from the brand. Buttons glow in the dark, so can easily be used at night. 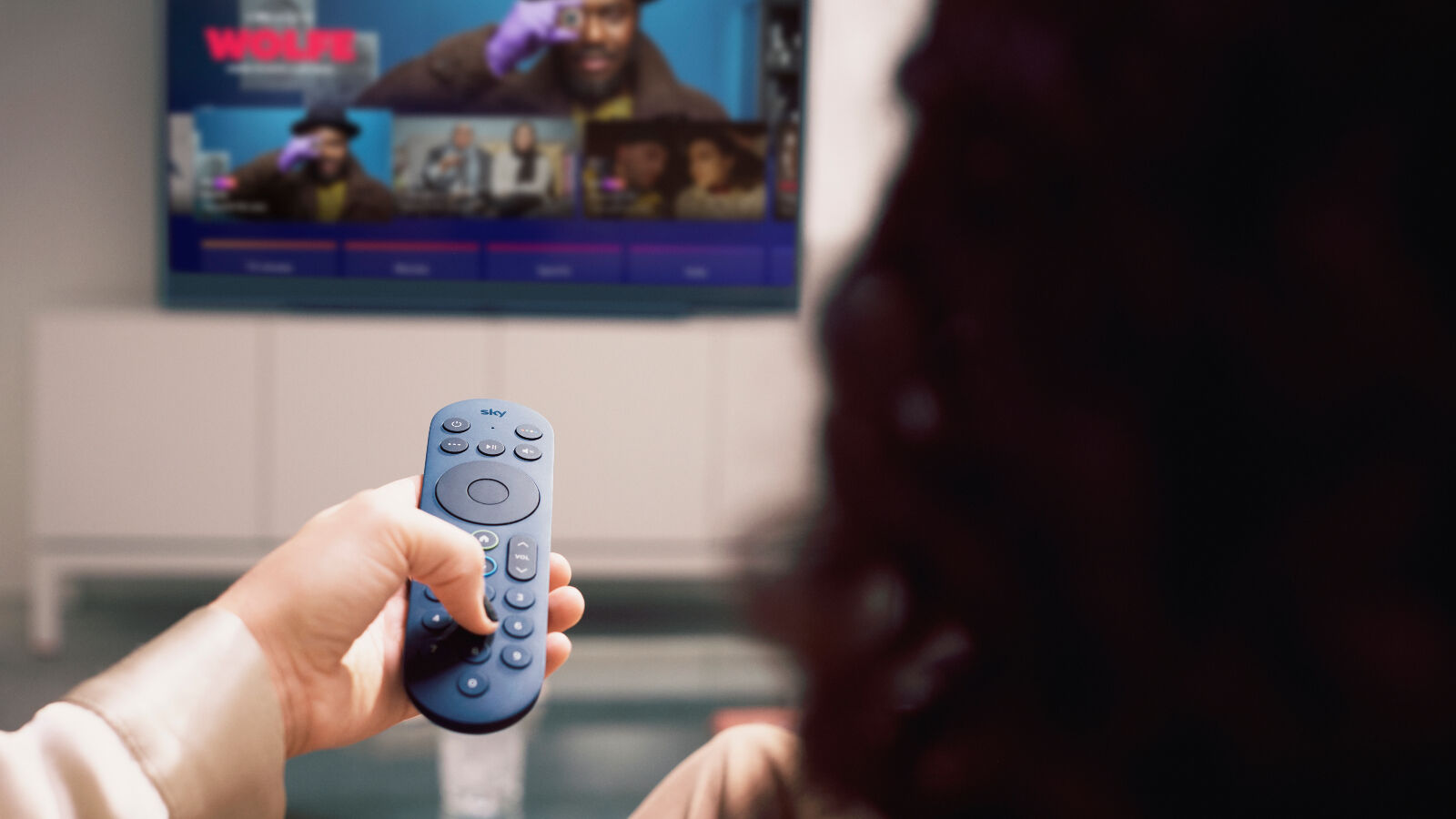 Sky also revealed a camera designed to work alongside Sky Glass, which is coming in Spring 2022. This can be used to chat with friends and family – with video call technology made in collaboration with Zoom. The camera will feature noise-cancelling technology. 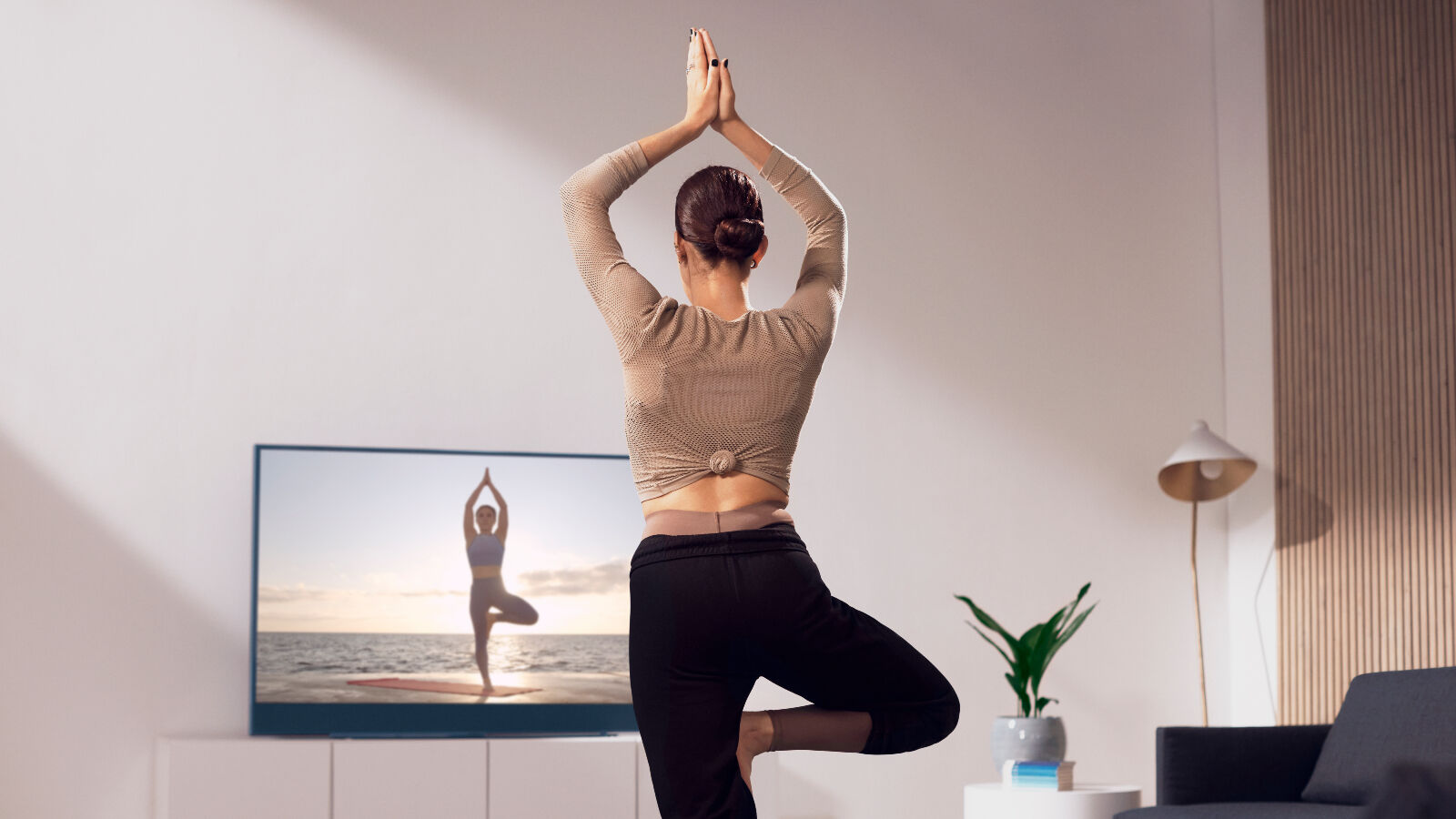 The ‘watch together’ feature allows users to tune into TV shows and movies simultaneously and see the reactions at the side of the screen. There’s also games with motion technology, and workout routines. The camera also be switched off via a button.

If you’d like to know more about how Sky compares to rivals, take a look at our comparison of Sky and Virgin.