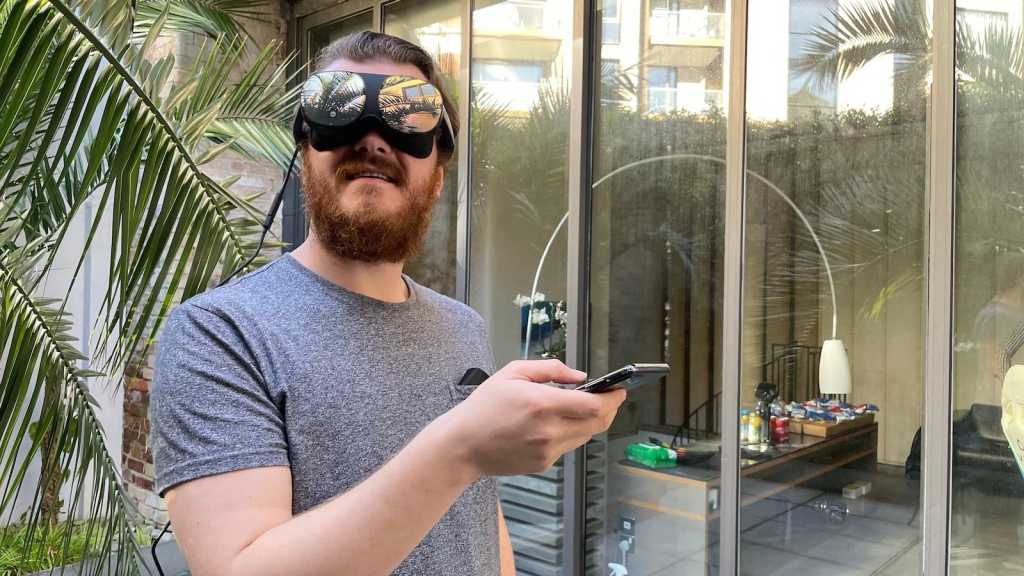 HTC has today revealed something quite unlike anything we’ve seen before in the VR space – and that’s because, despite the heavy VR focus from Vive, the company claims that it’s not a headset.

Instead, HTC refers to the Vive Flow as its first pair of “immersive glasses” – and I’ve been lucky enough to go hands-on (or is that eyes-on?) with the lightweight headset ahead of release in November.

The first thing you’ll notice about the Vive Flow is that it looks completely different to practically every headset on the market right now, sporting a form factor closer to smart glasses than a full VR headset – and there are plenty of benefits.

It’s not only more lightweight than most headsets at just 189g (about the weight of an average phone) but it’s also comfortable to wear over long periods, with a standard sunglasses design that doesn’t wrap around the back or top of the head, and the soft-touch removable faceplate provides a snug fit that doesn’t build up pressure – at least it didn’t during my extended hands-on session. 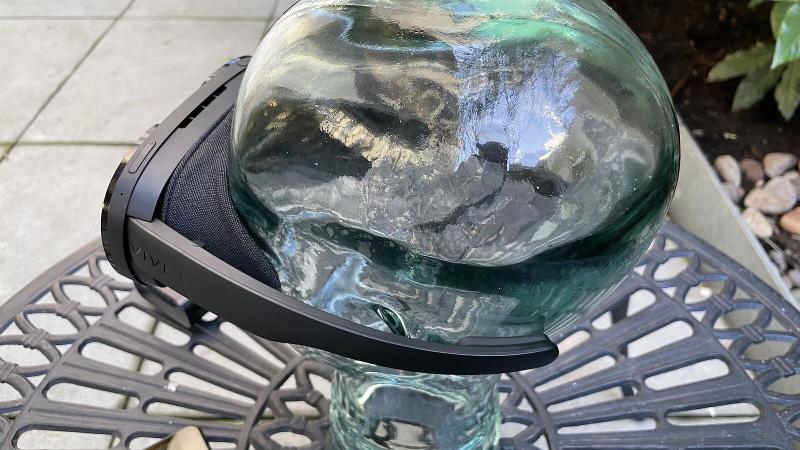 The design also makes it much easier to put the Flow on and take it off, as it’s practically the same as putting on a pair of glasses.

Of course, the arms pack in a bunch of tech – including down-firing speakers that direct audio towards your ears – and with that comes a level of rigidity.

Vive managed to overcome this where other smart glasses (like the Ray-Ban Stories) have failed by using a dual-hinge system that can bend to accommodate small heads, large heads and everything in between. The hinge can either bend inwards or outwards depending on your head shape, with a grip that’s secure but not vice-like.

Overall, the mirror-finish look of the glasses is stylish, if not a bit superhero-esque. These certainly aren’t the glasses to wear if you want to blend in on the tube or on a plane, but it’s what’s on the inside that counts, right? 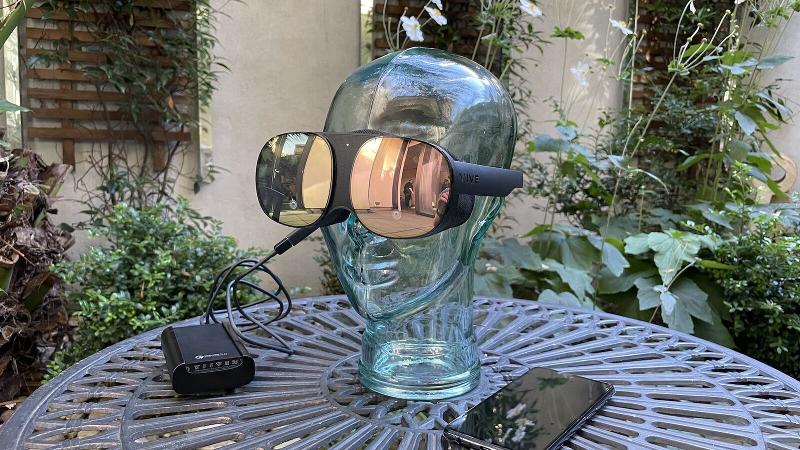 The Vive Flow packs a 3.2K display split at roughly 1.6K per eye, offering a 100-degree field of view (FOV) and a 75Hz refresh rate, and it features built-in focus adjustment (between 0-6) for those that are short-sighted and might otherwise need glasses to use the headset – a huge selling point for the Flow, and something I’d love to see adopted by other headsets in future.

When it comes to tracking, there’s 6DoF (Degrees of Freedom) tracking like the Oculus Quest 2 for the headset itself, but it’s a different story with the controller – aka your Android smartphone.

While it’s a great idea to utilise a bit of tech you’ll almost always have on you as a controller, the more limited 3DoF tracking on offer can sometimes make for a frustrating point-and-click experience akin to that of the cheaper Oculus Go. 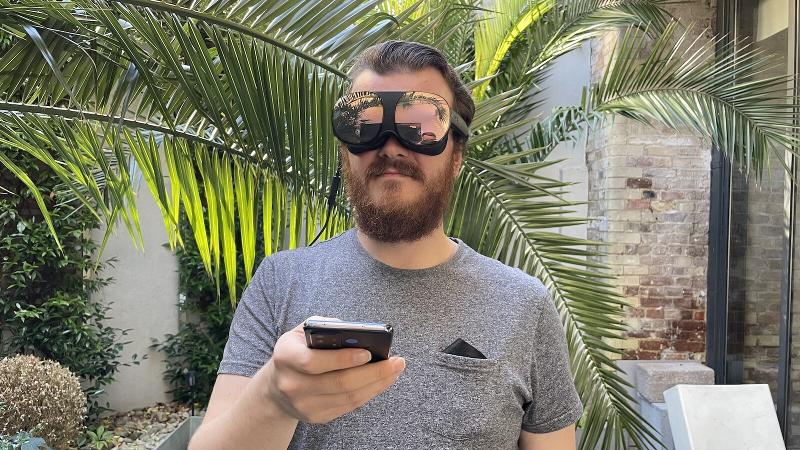 With that in mind, the Flow won’t beat a high-end VR headset, but it isn’t designed to be the ‘one to rule them all’ – it’s more focused in its approach.

The Vive Flow, in HTC’s eyes, is the ideal headset for watching movies, playing casual games, practising mindfulness, and potentially working – and in my experience, it does those things very well.

There’s a bunch of standalone apps and basic games (like those available for the OG Oculus Go) available through Vive’s new Viveport Infinity Vista subscription – tailored to the standalone nature of the Flow, including apps focused on mindfulness, work/collaboration and storytelling apps too.

The big draw for many will be the inclusion of Miracast mirroring technology, allowing you to not only see your smartphone’s home screen on a large virtual display, but interact with it too. You can open apps and games, and that includes apps with DRM content like Disney+ and Netflix, allowing you to enjoy content in a virtual cinema screen – perfect for long train journeys and flights. 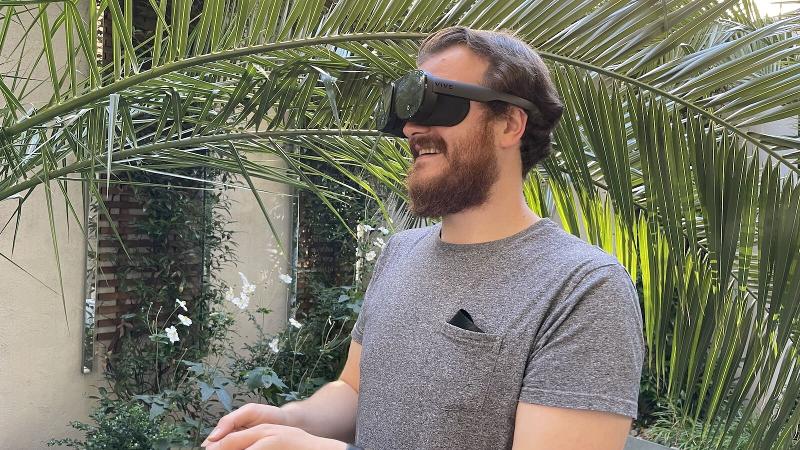 It also allows for added perks compared to the native apps available on VR platforms, offering the ability to save content locally for offline viewing in apps like Netflix. Better yet, you don’t need to put the headset on to find and save content – just save it on your phone as usual, and connect when you want to begin binging.

It’s a similar story with mobile games and cloud-based gaming apps like Google Stadia, Nvidia GeForce Now and Xbox Cloud Gaming too – who doesn’t want to play the latest AAA games on a 100in display?

The connection is primarily wireless, and while that may worry some, it’s actually of much better quality – and lower latency – than other wireless mirroring solutions I’ve used in the past. It’s actually a viable option to wirelessly mirror movies to the headset for viewing on the go or when you’re at home, and with no headstrap at the back of your head, you can lay back and get comfortable.

But while the Miracast technology is a huge win for the Vive Flow, it’s also available exclusively for Android users, with no alternative available now – or in the future – for iPhone users. You’ll have to hold out for Apple’s own AR/VR headset, whenever that appears. 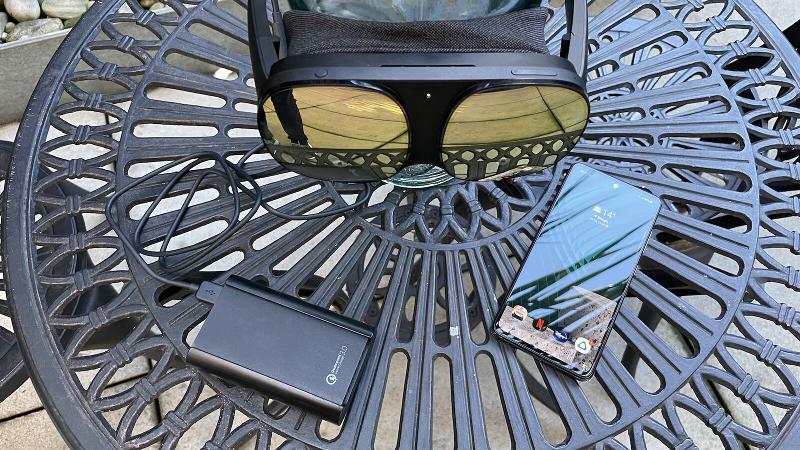 The biggest hurdle for Vive to overcome with the Flow is battery power. In a bid to keep the headset as lightweight, small and comfortable to wear as possible, it only includes a tiny battery.

Instead, the Vive Flow is powered primarily via USB, either via a 7.5W USB 3.0 port, a power bank or your smartphone if it’s USB-C enabled. It’s an easy enough solution in theory, plugging the headset into a power bank that slips into your pocket or a USB port on a plane, but it’s not exactly the pick-up-and-go option that consumers are getting used to from standalone competitors.

If you like the idea of the Vive Flow, you can pre-order the immersive glasses today, 14 October, but it’ll cost you a not-insignificant £499/$499 – another hard sell when you consider the more technically capable (but much heavier and bulkier) Oculus Quest 2 comes in at £299/$299, but I’m confident that there will be some that prefer the lightweight nature of the Vive Flow.

HTC is bundling a protective case and free content to sweeten the deal ahead of general release in the UK, US and other key markets in early November. 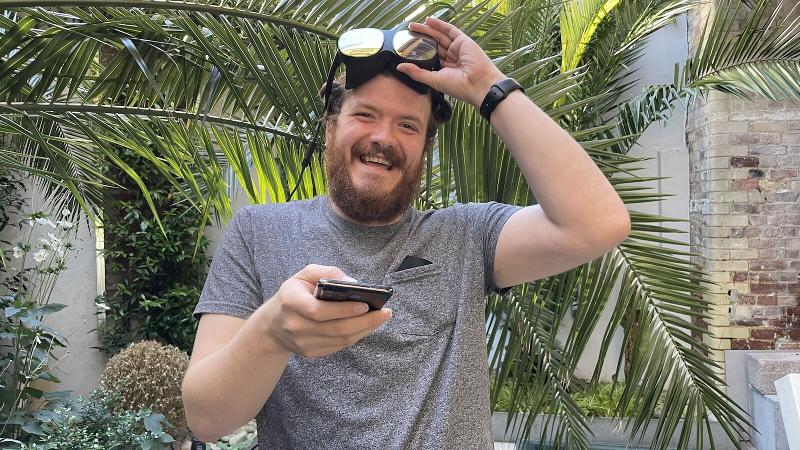 We’ll have a full review live soon, but in the meantime, take a look at our selection of the best VR headsets available right now.