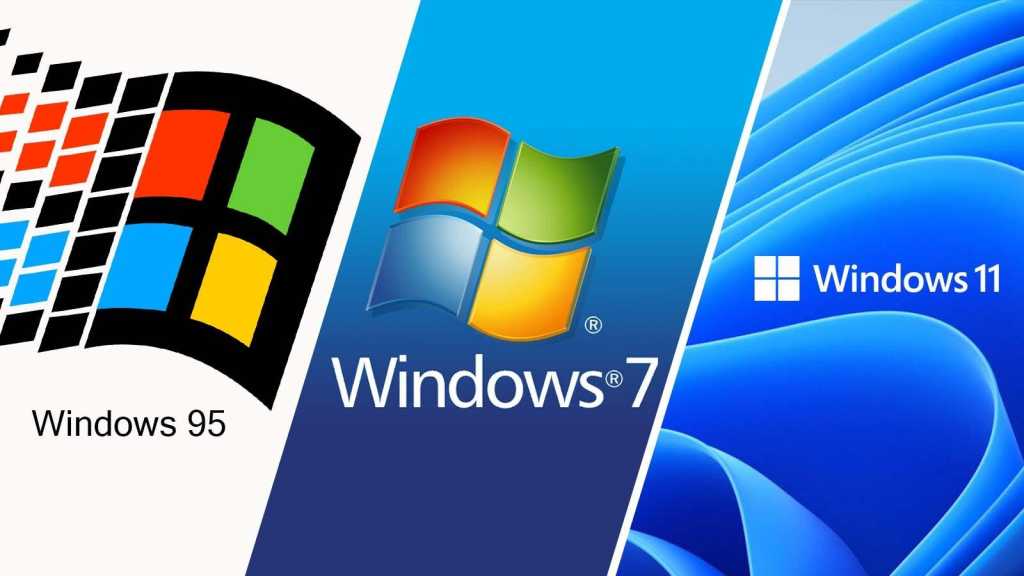 Windows 11 is here. So it must be time to unfurl the Microsoft banners, play the loading tune on your trumpet and wait for happy children to run into the town square as the festivities get underway.

Well, maybe not. The launch of an iterative version of an operating system doesn’t quite stir the spirit in the way that, say, an album from your  favourite reclusive artist, a movie from a film auteur or even the latest smartphone does, but that wasn’t always the case for Windows.

There was a time when Windows launch day was the cause of real celebration. Grown men danced on stages in front of bemused and – quite probably – traumatised audiences, while small groups of precisely mixed ages and ethnicities held parties with the newly unwrapped and installed Microsoft products.

That was how things were in the minds of Microsoft’s marketing team in Seattle, at least, who through some kind of hypnotism or witchcraft made the likes of Bill Gates and Steve Ballmer throw themselves fully into the software-themed shindigs.

Dance for me, Microsoft boys!

In the middle of the last decade of the 20th century, Microsoft was very excited. Following on from the success of Windows 3.1, it had given the interface of its expected successor a reworking that would go on to set the tone for the next 25 years or so. The new Windows 95 would feature plug and play (PnP), the introduction of the taskbar, a dedicated area for notifications, and most importantly the new Start button.

It was the latter that would get most of the focus, as the team promoting the new version of Windows paid millions to secure the rights to the Rolling Stones song ‘Start Me Up’ for use during the advertising campaign. As you can see from the ad below, it was a great way to draw attention to the new tool that would make it easier for people to use Windows.

You may also notice that the ad team kept looping the Start Me Up bit and never allowed the song to reach its chorus, probably because the words include ‘You make a grown man cry’, which would also be the experience of many Windows users at the time.

Microsoft wasn’t finished there, though. With the Friends TV show a smash hit, the marketing team swung into action and hired Matthew Perry and Jennifer Aniston to star in the world’s first ‘Cyber Sitcom’! The two beautiful people would stumble into Bill Gates’ office, crack some jokes, then be introduced to the new features in Windows 95. How could it fail? Well, you can watch and judge for yourself.

Perhaps the most tear-inducing moment of the Windows 95 celebrations though was reserved for the official launch presentation by the senior figures at Microsoft, when they started what appeared to be an impromptu (but presumably scripted) dance party on the stage. If you want to see the human embodiment of dad dancing and cold fear appearing on the faces of gyrating software engineers who realise just how long a song can be, then watch the video below.

That didn’t apply to Steve Ballmer, of course, who genuinely seemed to be enjoying himself. Or, more accurately, seemed like he would willingly bite the heads off of anyone who dared not herald the dawn of a new Windows age.

Maybe this was the moment that sealed the deal and led to him becoming CEO of Microsoft when Gates finally stepped down a few years later? Whether it was or not, Ballmer would be the next man to host a Windows launch party, albeit – mercifully – with less dancing.

Windows ME came and went. Nobody cared and it’s all but forgotten now, but Windows 7 would be the next to get the party treatment. This time around there was no rock and roll, no Hollywood guest stars, and the senior staff didn’t have to practice their dance moves ahead of the launch.

That’s because Windows 7 would allow you, the person on the street, to be the ones who celebrated. I mean, it stands to reason. What is your first thought when a major new version of a desktop operating system is released? Of course, HOUSE PARTY!

To grease the wheels of awkward human interaction, Microsoft created party packs and released ads telling you how you could host your own launch event. As one of the ‘stars’ of this incredible work of creation states in the video, ‘In a lot of ways, you’re just throwing a party with Windows 7 as an honoured guest.’

It’s telling that the actor’s eyes betray his inner loathing of the choices he made to bring him to this point in his career.

The entire video beggars belief. Truly, you should watch it. But that doesn’t stop it from being a time capsule from an era when technology had no idea how to be cool.

There’s a marked difference to the Apple marketing juggernaut that would soon tear up all the scripts and bring gadget-porn to the masses.

Windows 7 would, of course, go on to be the most popular version of the OS so far. So much so that Microsoft is still struggling to stop people using it even now. Windows 8, the oddball replacement, certainly didn’t help matters.

Microsoft CEO Satya Nadella has kept proceedings much more sedate than his predecessors. But, in a strange way, I miss the madness of those past launch parties.

Yes, the dancing is hilarious to watch now and the party video is arguably the most naive piece of marketing that the world has ever seen. Yet, there’s something genuinely compelling about people being so excited about their new software that they don’t mind taking a few chances and making themselves look silly.

We can’t all be the beautiful urban professionals that populate Apple’s aesthetic, but any of us can throw down some shapes and look like our various appendages have never met before.

Windows 11 is here, so I’m determined to party like it’s Windows 95! Will you all please join me on the stage?

To help celebrate the new release, read our guide on how to get Windows 11.