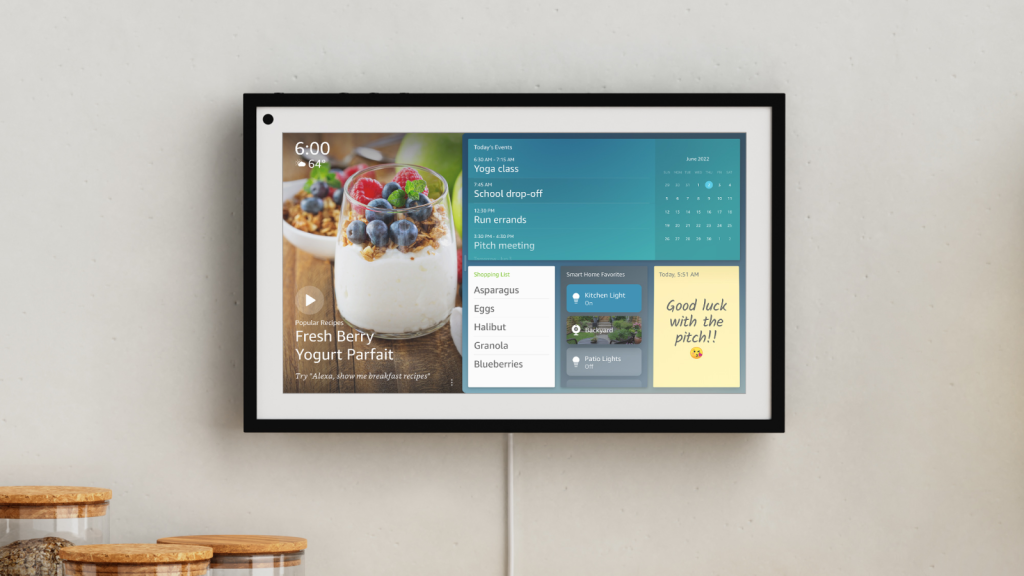 At its September devices & services event, Amazon unveiled the Echo Show 15. Its biggest-ever smart display has a 15.6in screen and can be mounted on the wall vertically or horizontally.

Not only is it the biggest Echo Show yet, it’s also the joint most expensive (it costs the same as the rotating Echo Show 10), but offers a completely different design and a range of useful new features including Visual ID and Custom Sound Detection.

When is the Echo Show 15 release date?

You can buy an Echo Show 15 from Amazon right now. At the time of writing delivery estimates were “usually dispatched within 4 days”.

What are the Echo Show 15 specs and features?

As the name suggests, the Echo Show 15 has a 15.6in Full HD screen making it the biggest Amazon smart display to date following models like the Echo Show 8 and Echo Show 10. It’s the same display real estate as a full-size laptop and you can either have it on a stand or wall-mounted in either landscape or portrait orientation.

This versatility means you can put it in various rooms in the house, even if there’s no flat surface available. Although, a countertop stand or under-cabinet mount are sold separately. With its stylish bezel, it looks a bit like Samsung’s The Frame TV.

Being an Echo Show, the 15 has microphones and stereo 1.6in speakers. There’s also a front-facing camera which has a 5Mp sensor. We do know that the Echo Show 15 is powered by a new quad-core AZ2 Neural Edge processor. 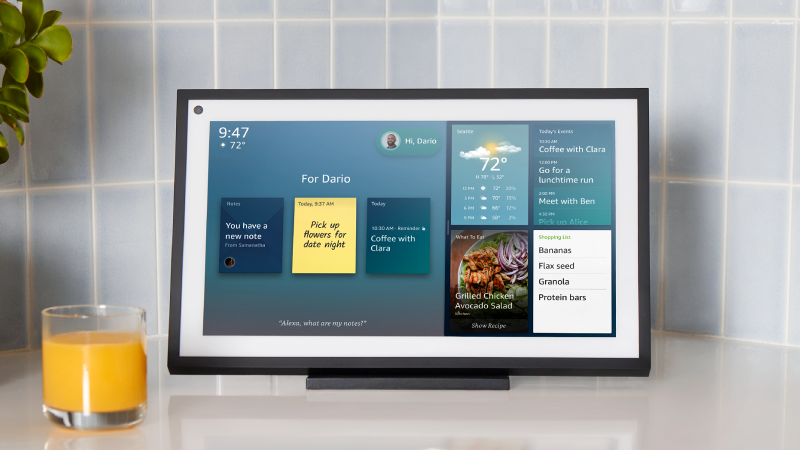 It might seem like a cheap laptop you can hang on a wall but the Echo Show 15 is largely about what it can do for you via Alexa and a bunch of new features. Amazon imagines it as a smart organisation and entertainment hub for the whole family to use.

Like Google’s Nest Hub Max, the Echo Show 15 can use the 5Mp camera to recognise users via Visual ID. Once it knows who is using the device, a personalised experience can be offered. However, it doesn’t have auto-framing like the Echo Show 8 and 10.

The improved interface now features Alexa widgets so you can put the things you want the most front and center. This includes a widget with your favourite smart devices including a Ring doorbell. The Show 15 can show you video feeds from your cameras while doing other things like listening to music via picture-in-picture.

Things like a shared family calendar and digital sticky notes will see the end of illegible scribbles on a traditional calendar and overlapping sticky notes stuck on the fridge. You can even teach Alexa things like your diet or favourite sports team.

Alexa is trained to recognise sounds like a glass breaking or baby crying but you’ll be able to teach it custom sounds that might be unique to your home. It’s called Custom Sound Detection and, for example, the beeping your fridge does so Alexa can notify you that the door is open.

With a large Full HD screen, the Echo Show 15 is arguably the best smart display on the market for entertainment. You can watch content via Prime Video or Netflix and Amazon has confirmed that Sling will arrive later this year.

There are privacy controls including a built-in shutter to cover the camera and the ability to switch mics off. You can also delete your voice recordings and Visual ID is optional and can be deleted at any time if you do use it. Amazon also says that all processing is done on the device.