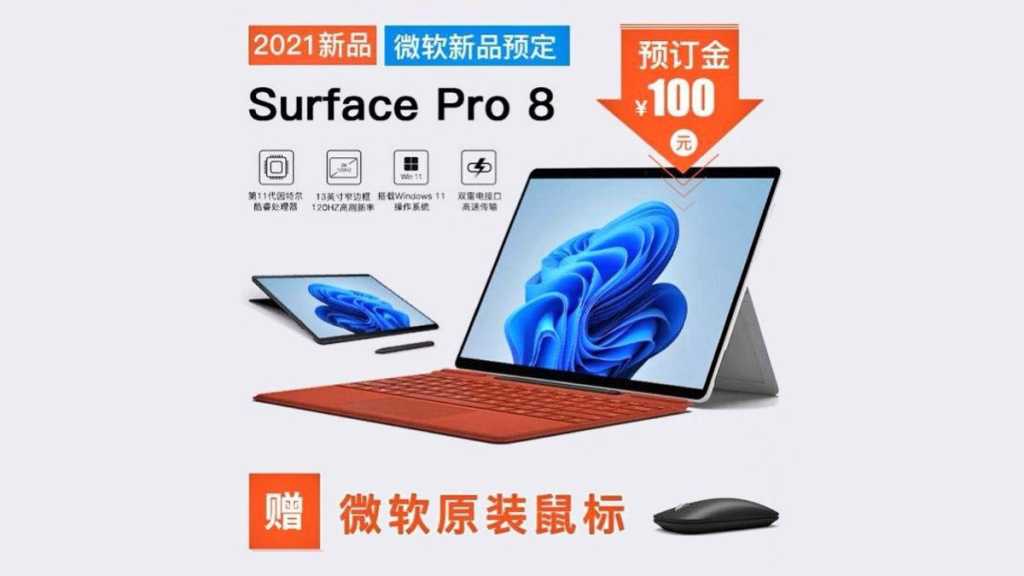 Microsoft has managed to keep most of the news regarding its upcoming Surface devices under wraps – until now. The Surface Pro 8, Duo 2, Go 3 and next-gen Pro X have all leaked within hours of each other, while new renders of the Surface Book 4 also appear to be accurate.

It’s no surprise to see some of the biggest leaks now: we’re just a couple of days away from Microsoft’s virtual event on 22 September, where everyone expects new devices to launch. The only information that’s come direct from the company so far is a 2-in-1 device in the official event teaser. Given that it’s one of Microsoft’s flagship products, it’s probably the Surface Pro 8.

The Pro 8 is Microsoft’s next-gen flagship 2-in-1, and it’s also the device we know most about. According to a tweet from prolific leaker @Shadow_Leak, it will use Intel’s 11-gen Tiger Lake processors to power a 13in, 120Hz display with significantly slimmer bezels (see above). There will also supposedly be dual Thunderbolt ports and a replaceable SSD, something we also saw in the business-focused Surface Pro 7+. This aligns with previous reports from Windows Central, although the rumoured €680/US$799 starting price is new – that translates to around £580.

Next up, the Surface Duo 2. Microsoft’s second-gen dual screen phone looks to be a big upgrade on the original, judging from FCC certification in the US. It will supposedly feature 5G and NFC, two key features that were missing from the first generation. There’s also mention of “Wireless Power Transfer”, but this may just be to wirelessly charge the Surface Pen stylus and other accessories – not the whole device. However, there’s no mention of the rumoured triple rear cameras or Snapdragon 888 processor.

It’s looking likely we’ll see several new Surface 2-in-1s launch on Wednesday. The Surface Go 3 is expected, although this more affordable device is likely to be an iterative update.

On German tech site WinFuture, author Roland Quandt claims to have seen full details of the Go 3 in a now-deleted listing from Thai retailer Shopee. On the hardware side, the only new feature of note is the processor – apparently you can now choose between Intel’s Pentium Gold 4425Y or Core i3-10100Y. It may also be slightly lighter, and has an expected €380 starting price (approx. £325/US$445).

Microsoft is also likely to refresh its ARM-based Surface Pro X. A processor upgrade is most likely, although an Energy Star certification suggests it’ll still use the Snapdragon-based SQ2 chip. Up to 16GB of RAM is also mentioned, although this could be a limited release – only the US, Switzerland, Taiwan, Japan and Canada are listed as markets.

If that’s not enough, graphic designer Ryan Smalley has produced unofficial renders of the redesigned Surface Book 4 based on the leaks so far. They show how the new detachable screen could be adjusted to suit a wide variety of use cases. It’s also expected to be announced during what looks like a bumper event for new Surface hardware.

Aside from the Duo 2, which runs Android, all the new Surface devices will ship with Windows 11 out of the box. They’re likely to be available shortly after its 5 October release date, making them among the first Windows 11 devices. Indeed, they may end up going on sale before the first confirmed Windows 11 laptop – Honor’s MagicBook V 14.

These leaks have given us a good idea of what to expect on 22 September, but Microsoft may have a few surprises in store. Check out how to watch Microsoft’s Surface event live to ensure you don’t miss anything. Also, look out for full coverage of the event on Tech Advisor.