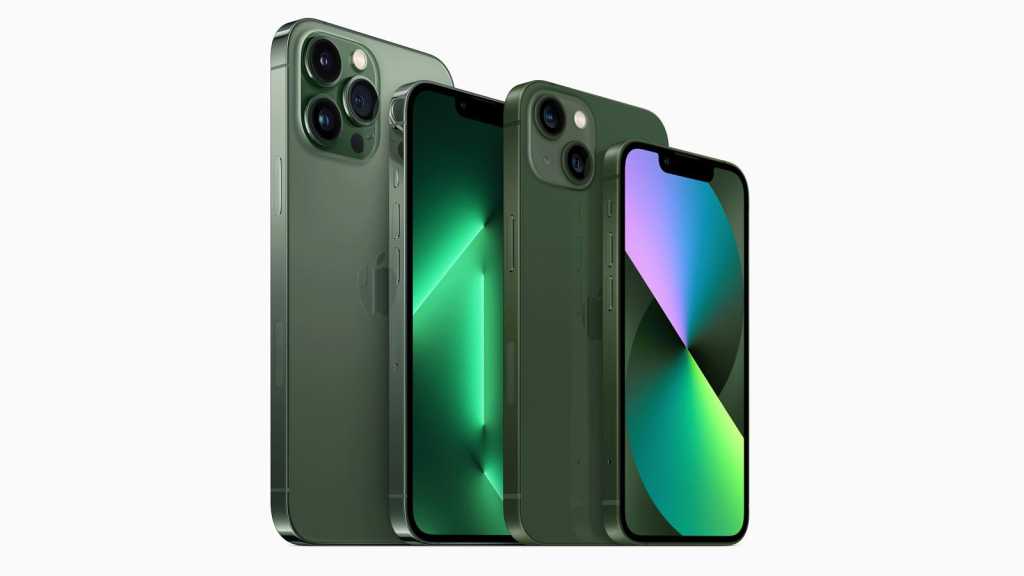 Apple officially launched the iPhone 13 range in September 2021. There’s no dramatic redesign (apart from a diagonal orientation of the cameras), but you do get an improved display, better cameras, a stronger battery, and improved performance with an upgraded A15 Bionic processor.

Following the same convention as its predecessor, there are four models: the iPhone 13, 13 Pro, 13 Pro Max, and 13 mini – all of which, once again, support 5G.

In March 2022, Apple announced two new colours. The first is alpine green, which is available on the 13 Pro and 13 Pro Max, adding to the sierra blue, graphite, gold, and silver colours already available.

The other is, simply, green. That’s available on the iPhone 13 and 13 mini, and is a bit darker than alpine green. It is in addition to (PRODUCT)RED, starlight, midnight, blue, and pink.

You can buy an alpine green iPhone Pro or Pro Max from Apple, as well as many of the other retailers and networks we list below including EE in the UK and AT&T in the US.

The green iPhone 13 and 13 mini are also available to buy from Apple – and other retailers listed below – following release on 18 March.

Below are all the best places to buy any model of iPhone 13 in the UK and US, whether you’re buying SIM-free or on contract.

Where to buy a SIM-free iPhone 13: best deals

The iPhone 13 range is widely available from major UK and US retailers, with some offering tempting deals right now.

John Lewis in the UK is offering up to £300 off when you trade in your existing iPhone, and Very has £50 off the RRP of the iPhone 13 and iPhone 13 Mini. And let’s not forget the extended two-year warranty that comes as standard too.

Where to buy an iPhone 13 on contract: best deals

All major networks in the UK offer the iPhone 13 range, but there’s a particular deal that has caught our eye.

You can also find top deals, including cashback offers, from the following retailers:

Does Apple have any trade-in deals on the iPhone 13 phones?

Apple UK only accepts iPhone models, but US shoppers can trade in a greater variety of devices, including the:

US customers who want to trade-in and buy the iPhone 13 on contract can get a $200 credit as well as discounts up to $500 off the monthly line rental costs. You’ll need to trade in directly via Apple online or in-store while signing on with AT&T, Verizon, or T-Mobile/Sprint.

See the trade-in network offers directly at Apple for the:

How much does the iPhone 13 range cost?

When did the iPhone 13 range go on sale?

What’s new with the iPhone 13 range?

The A15’s 6-core CPU – made of 2 performance cores and 4 efficiency cores – and 4-core GPU make the iPhone 13 “50% faster than the competition”, according to Apple. The A15 Bionic also powers the new 6th gen iPad mini ( here’s where you can buy one).

You can also expect improved low-light shots on the iPhone 13 and 13 mini with an upgraded Smart HDR 4 support. A new Photographic Styles feature also lets photographers save camera settings for future use, while the Cinematic Video feature allows video recording with a shallow depth of field (as you might see in a film) in 1080p (30fps).

The iPhone 13 and 13 mini both offer Super Retina XDR displays which Apple says is 28 percent brighter than the iPhone 12 equivalents. The handsets achieve a maximum brightness of 1200nits, while also being more power-efficient.

The iPhone 13 Pro and 13 Pro Max add to these upgrades by also introducing adaptive refresh rates up to 120Hz. Aperture sizes on the Pro variants also get a boost, along with optical zoom, which now goes up to 6x (up from 4x). The 13 Pro and 13 Max operate on an A15 Bionic chip with a stronger 5-core GPU too, for even more powerful graphics processing.

If you want to get into the technical details of all the specs and upgrades, take a look at our full iPhone 13 range guide.