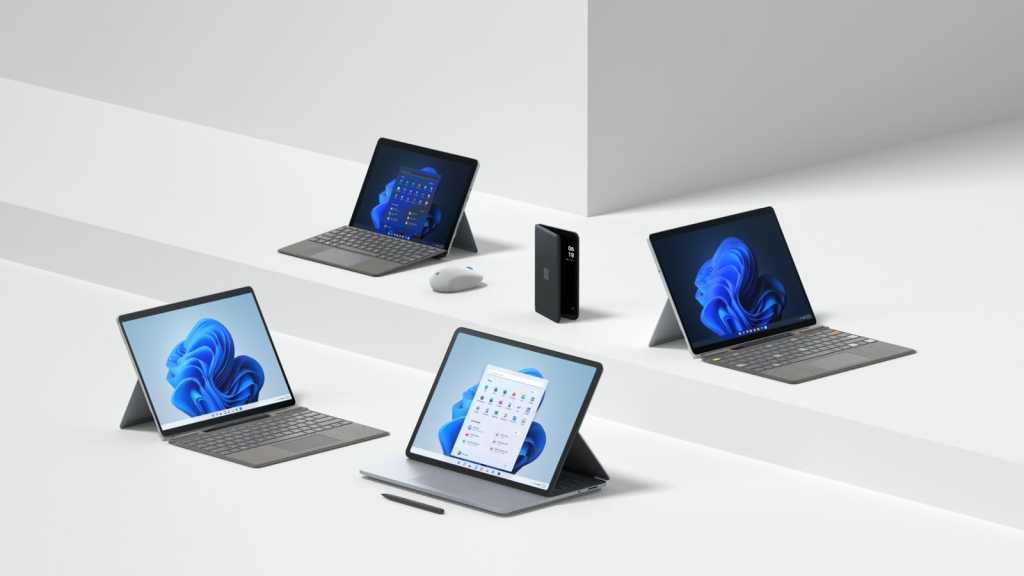 Aside from January’s business-focused Surface Pro 7+, Microsoft released just one new device in the first eight months of 2021. The Surface Laptop 4 was a welcome upgrade, but it left many other Surface devices overdue an update.

With that in mind, big things were expected from Microsoft as soon as it announced an event for 22 September. The company hasn’t disappointed, with a total of five new Surface devices joined by some high-profile new accessories. Without further ado, here’s everything Microsoft announced at its September 2021 Surface event.

2020 was the first year without a new Surface Pro since the product line first launched, but Microsoft has emphatically put that right in 2021. The minor updates on the Pro 7+ did little to convince consumers to update, but the Pro 8 presents a much more compelling case.

Microsoft is describing it as ‘the most significant leap forward since the Pro 3’. From a design standpoint, that certainly seems to be the case. The display has increased from 12.3in to 13in, and it now supports refresh rates up to 120Hz. 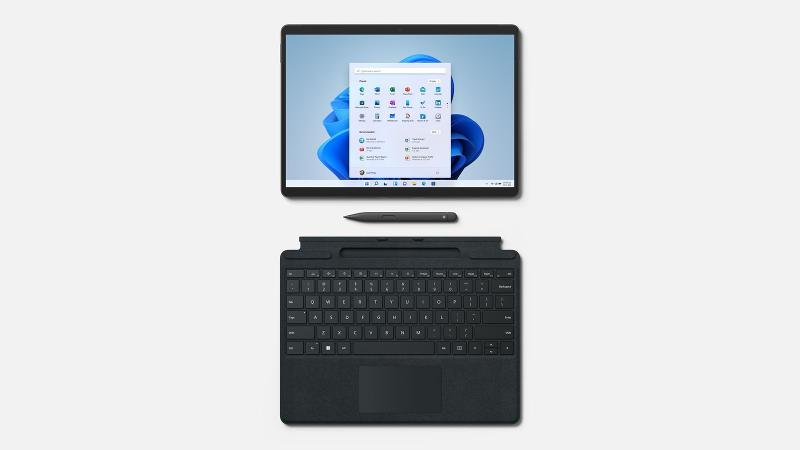 The screen also has a new resolution – 2880×1920 – but maintains the 3:2 aspect ratio. A significant slimming of bezels means the total footprint of the device is relatively similar.

Under the hood, the Pro 8 now features Intel’s latest Tiger Lake processors, although the rumoured option for AMD silicon hasn’t materialised. The 5Mp front-facing camera is unchanged, but the rear lens has been upgraded from 8Mp to 10Mp – it now supports 4K video recording.

Microsoft still doesn’t quote specific battery capacities, but it says the Pro 8 will last up to 16 hours on a single charge, up from 10 hours on the Pro 7. Just over an hour plugged into the charger will apparently get you from 0-80%, too.

Read more about the Surface Pro 8 and where you can buy one.

The delay between the announcement and release of the original Duo meant it instantly felt outdated, but that’s not the case with its successor. A raft of upgrades makes the dual-screen phone feel like a genuine rival to Samsung’s Galaxy Z Fold 3, despite the very different form factors.

Microsoft has also increased screen size here – each display is now 5.8in instead of 5.6in, providing a total area of 8.3in (up from 8.1in). Both are still AMOLED, but now feature a 90Hz adaptive refresh rate and unusual 1344×1892 resolution. 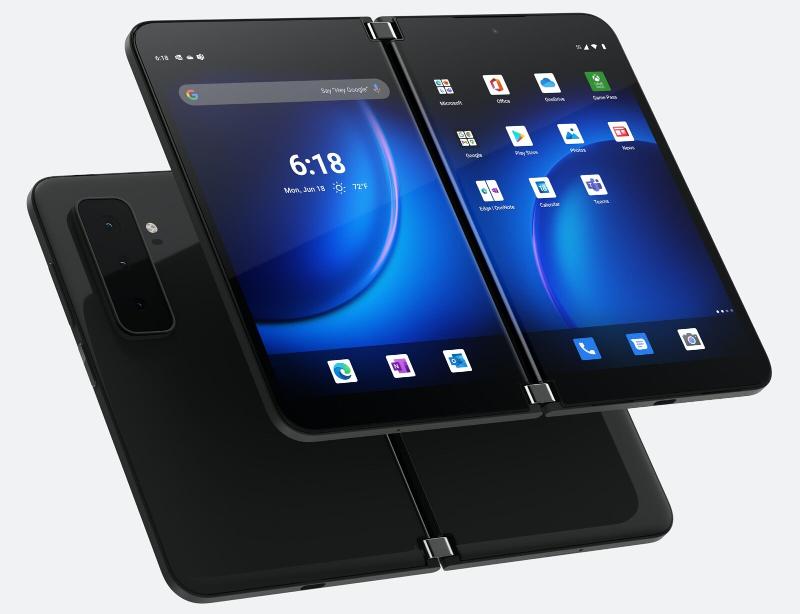 The internals have also been significantly upgraded. Qualcomm’s Snapdragon 855 has been swapped out for the 888, a chip we’ve seen in many 2021 flagship phones. It has a 5G modem built-in, while Microsoft has also added NFC – these were both notable omissions on the original Duo.

However, cameras are the area that have seen arguably the biggest upgrades. The single 11Mp sensor on the original Duo has been upgraded to 12Mp, while there’s now a new triple rear camera setup. A main 12Mp sensor is joined by 12Mp telephoto and 16Mp ultrawide.

If that wasn’t enough, there’s also a much bigger battery. The Duo 2 has a 4,449mAh cell, up from 3,577mAh on the original. 23W fast charging is supported too, but you’ll need to buy a separate adapter.

Read more about the Surface Duo 2.

While the Pro 8 and Duo 2 are significant updates to existing devices, the Surface Laptop Studio is a brand-new device. It may turn out to replace the Surface Book in Microsoft’s product lineup, but that’s still to be confirmed.

Either way, it’s radically different to 2020’s Surface Book 3. Instead of having a fully detachable display, the Laptop Studio’s screen can be pulled forward and interacted with directly. Microsoft says this can be used for gaming, streaming, docking or presenting to clients, but it could be useful in any situation where you don’t need the keyboard. It’s made possible thanks to what Microsoft is calling a ‘Dynamic Woven Hinge’, with the company specifically advertising its durability. 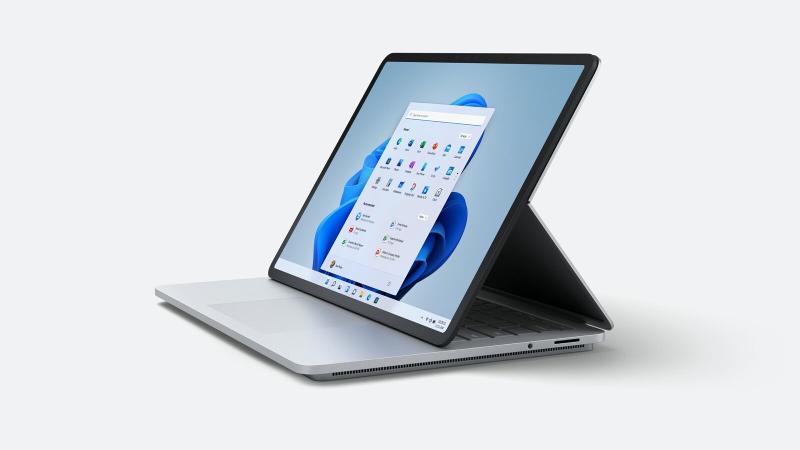 The screen itself is a 14.4in, 2400×1600 touchscreen, with a 3:2 aspect ratio and 120Hz adaptive refresh rate. It’s powered by chips from Intel’s high-end Tiger Lake H-Series, with a choice of i5-11300H or i7-11370H. The latter is paired with an Nvidia RTX 3050 Ti discrete GPU, while i5 models use Iris Xe integrated graphics. Microsoft has been able to flex its muscles when it comes to Surface Laptop Studio performance, as there’s no longer the need for all components to be housed behind the display.

According to the company, i5 models will get you up to 19 hours of “typical device usage” – on i7 variants it’s up to 18 hours. There’s also Thunderbolt 4 support and removable SSDs up to 2TB.

The three devices mentioned above bring significant changes to the Surface lineup, but the remaining two are much more iterative. That includes the Surface Go 3, Microsoft’s most affordable 2-in-1.

The big change you’ll (hopefully) notice is in performance – the Go 3 now has the option for an Intel Core i3 processor, while the Go 3 was limited to a less powerful Core M3. The i3-10100Y in question is only a 10th-gen chip, but should provide a useful performance boost. Even the Pentium Gold 6500Y on entry-level models is expected to be a signficant step up over the Pentium Gold 4425Y from last year. 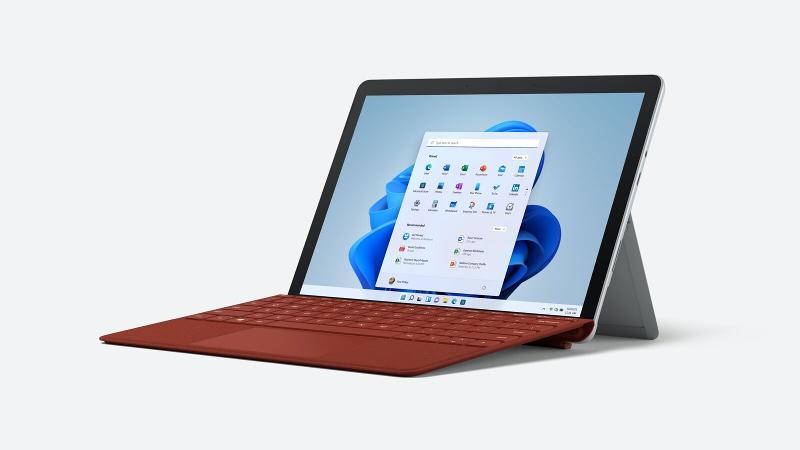 Aside from that, not much has changed. The Go 3 has the same 10.5in, 1920×1080 display, same RAM/storage options and same option for 4G on high-end models. There’s supposedly a slight improvement when it comes to battery life – up to 11 hours vs 10 hours on the Go 2 – but that may just be power efficiency improvements due to the new processors.

Read more about the Surface Go 3.

Changes on the 2021 Surface Pro X are even more minor. Microsoft’s ARM-based 2-in-1 is almost identical to last year, with even the processor remaining the same. Indeed, the only change of note is a new Type Cover, which now includes a space to store and charge the Slim Pen stylus. 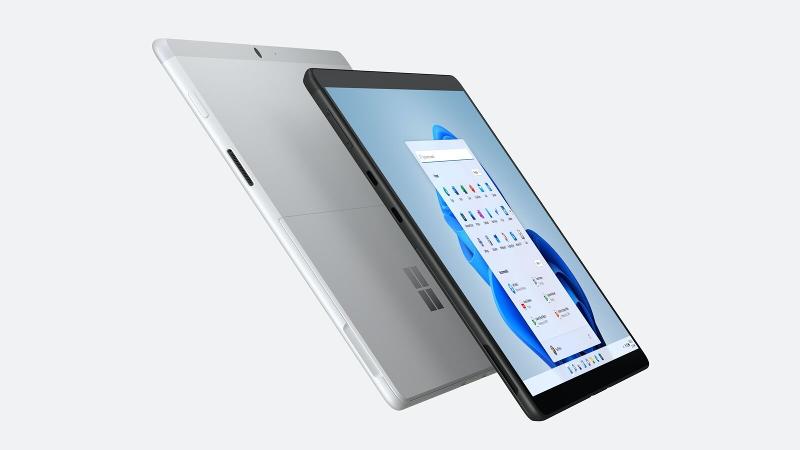 Both Wi-Fi-only and LTE models are available, but only the former will join the other new PCs in running Windows 11 out of the box. If you want 4G connectivity, you’ll need to wait for the free upgrade like all other Windows 10 devices.

Microsoft says the update is about bringing the Surface Pro X to more customers. That’s reflected in the new starting price of US$899.99 (likely £899).

The updated Slim Pen 2 is designed to slot into the new Surface Pro X Type Cover or attach to the side of the Surface Laptop Studio, but it works with all touchscreen devices. The tip has been redesigned to be sharper and more precise, alongside what Microsoft is advertising as “ultra-low latency”. 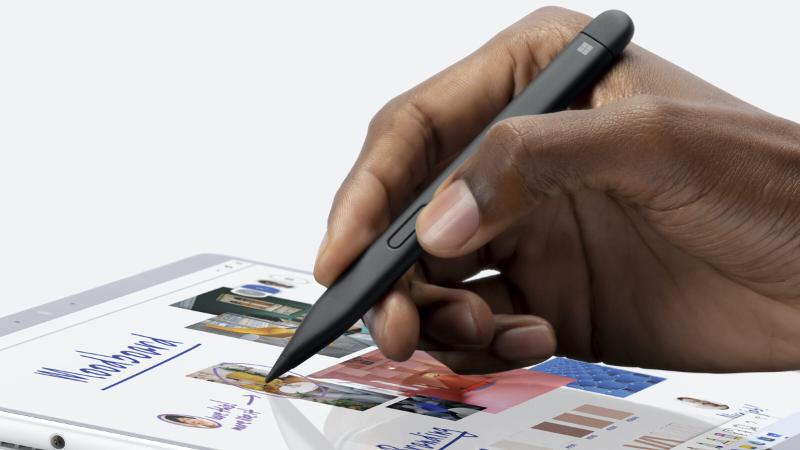 We discussed the Microsoft announcement alongside our thoughts on iOS 15 and the new Nokia G50 in Episode 84 of Fast Charge. Take a look below:

Look out for more coverage of the new Surface devices on Tech Advisor soon. Expect some to make an appearance in best Microsoft Surface guide soon, but we might be waiting longer before they appear in our UK-focused Surface deals roundup.