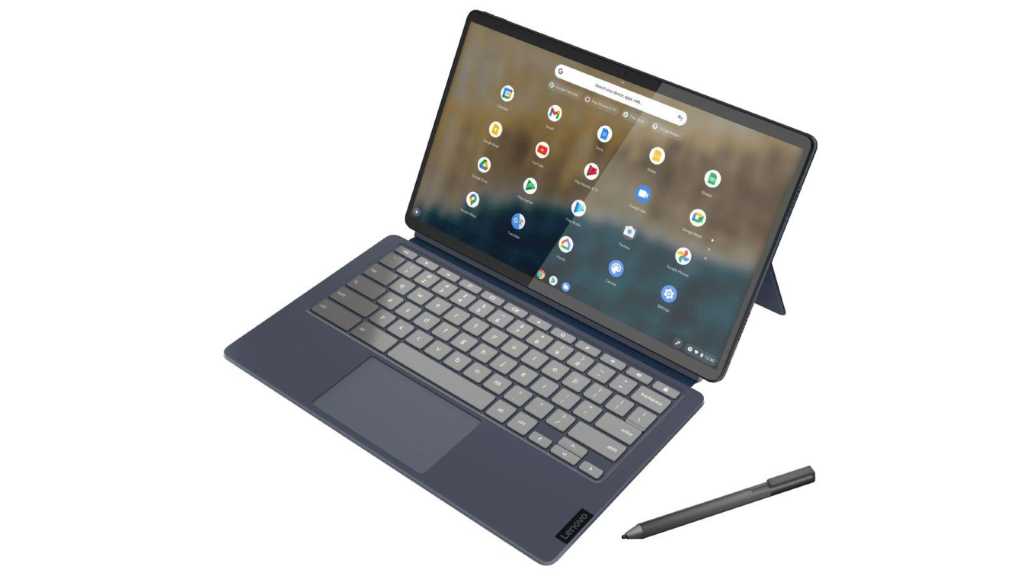 Lenovo is going big on OLED displays this September, with all three of its new laptops using the screen technology.

Its inclusion on the new IdeaPad Duet Chromebook is the most eye-catching, with the Snapdragon-powered 2-in-1 starting at just €499/US$429. Given most OLED laptops cost more than twice that amount, it’s should prove a tempting option.

The display itself is a 13.3in Full HD screen, up from a 10in 720p panel on last year’s model. Lenovo says it covers 100% of the DCI-P3 gamut, making it one of the most colour-accurate displays at this price. It can also supposedly reach 400 nits at max brightness, making outdoor usage a real possibility.

The other key upgrade here is Qualcomm’s budget-focused Snapdragon 7c Gen 2 chipset. It launched back in May 2021, and means the Duet also has 4G connectivity. Performance will be fine for basic everyday use, but demanding tasks are probably going to be too much for the Chromebook. The Duet can be configured with up to 8GB of RAM and a 256GB SSD, but we’ve asked Lenovo to clarify the specs of the entry-level $429 model.

As a 2-in-1 device, the Duet takes the form of a Chrome OS tablet with detachable keyboard. The latter is included in the box, a key advantage over Microsoft’s Surface Pro and Go tablets where the keyboard is an optional extra.

Lenovo hasn’t provided much detail on the keyboard itself, but official images show what looks to be a decent-sized trackpad and full-size keys. The cover that ships in the box also includes a built-in kickstand and space for an optional stylus.

Battery life is a priority on portable devices like these – Lenovo says the Duet’s 42Wh cell will last up to 15 hours on a single charge. It also supports the company’s Rapid Charge fast charging tech, which apparently gets you 80% back in just an hour. A full charge takes around two hours, although you’ll need to buy the necessary 135W adapter separately.

It’s worth reiterating the Duet’s starting price here – US$429 – which could make it a real contender in our best Chromebook chart.

Elsewhere, Lenovo has refreshed its Yoga Slim 7 line. A new Carbon model aims to deliver premium performance in an ultra-lightweight package. At just 1.08kg, Lenovo claims it’s the lightest 14in OLED laptop you can buy. The one thing to be aware of here is that it’s a 1440p – not the 4K resolution you often see in high-end devices.

The Slim 7 Carbon uses AMD’s latest silicon, up to the Ryzen 7 5800U. You can also call on a GeForce MX450 on high-end models. That’s one of the most powerful discrete GPUs Nvidia makes for laptops.

Aside from a larger 16in 2.5K display, the Slim 7 Pro (not to be confused with the Carbon) has a few differences compared to its smaller sibling. The top-spec CPU here is the Ryzen 7 5800H, while only higher-spec models use RTX 3050 GPUs – you’ll have to be content with integrated Radeon graphics on cheaper variants.

All three new devices will be available on the Lenovo website sometime in October 2021, meaning the Slim 7 laptops will run Windows 11 out of the box.