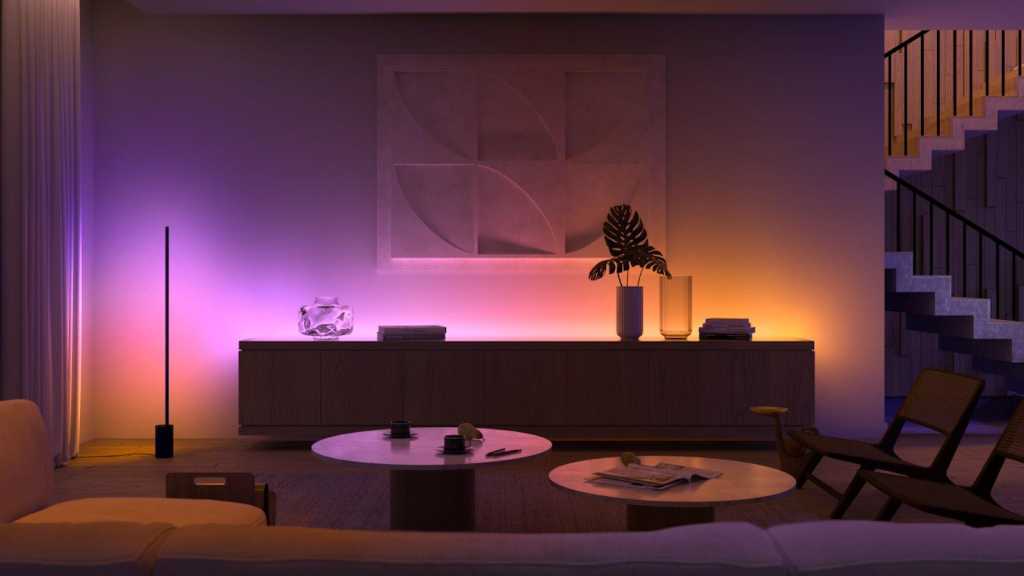 Hue users have a wealth of new lighting options coming their way across Europe and the US. Here’s when you can expect everything to drop and what the products will cost.

Beginning on 1 September, early access to Philips Hue + Spotify integration will become available to users of the Philips Hue app 4. After October, it’ll become a permanent feature of the app.

Hue users should look out for the Spotify option, which will appear in the app – although it may take up to a week to do so. The feature will work for both paid and free Spotify, as long as users have the Spotify app on their smartphone and a Hue bridge.

Once the Philips Hue and Spotify accounts are linked, the Hue app can extract the metadata from each song played on Spotify – on any device.

Philips believes that this will represent a serious step up for the integration of music and lights. The software writes a script for the lights that anticipates the progression of the song, so that the lights will respond not only to the beat but the music’s genre and atmosphere.

Hue users will be able to control the experience in the new Sync tab within the app, setting the brightness, intensity and colour palette of the lights.

If that all sounds quite intense, now imagine it while you’re brushing your teeth. Or not, as Hue imagines its new bathroom lighting will turn your bathroom into a home spa, enhancing a relaxing soak in the tub, rather than stressing you out while getting ready like a nightmare club toilet.

It’s expanding its line to include the minimalistic Xamento recessed spots, available from September in the UK (a 3-pack will cost £159.99) and the Xamento ceiling light (£174.99/ £229.99, depending on its size), which will be available later this year. These won’t be coming to the US, sadly. 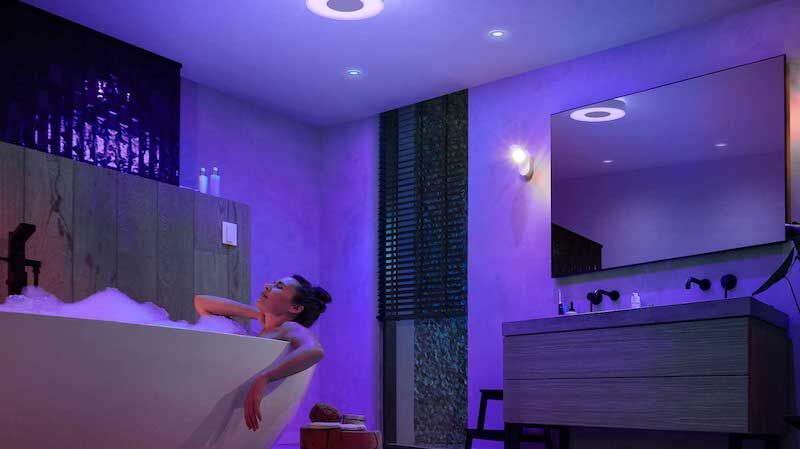 The lights will have warm-to-cool white light, so you can adjust them to help you wake up in the morning and wind down in the evenings, as well as colour options, presumably for disco baths.

New options for ceiling lighting for the bedroom, living room and kitchen are coming too, in the form of a ceiling panel, the Surimu (available from mid-September in the UK, £239.99), which sits flush to the ceiling and comes in both square and rectangular formats. It’ll have coloured light options. These will be European-only products as well. 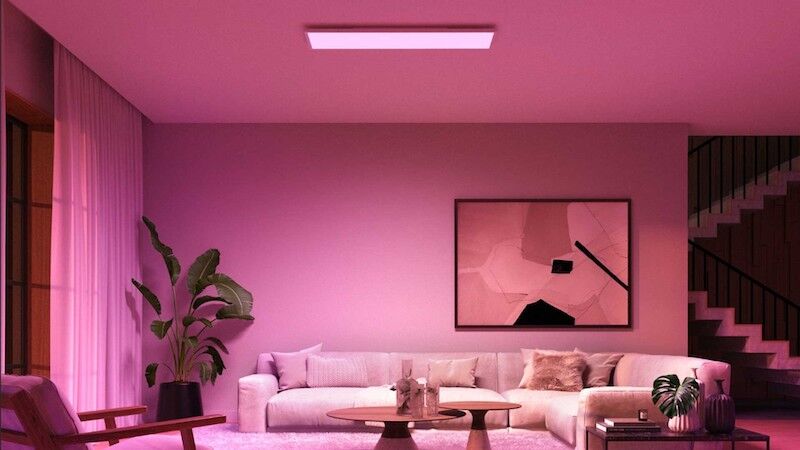 Likewise the disc-shaped Enrave (from October, £89.99-£229.99, depending on size), which will be available as either a ceiling or a pendant light, to illuminate a dining table or kitchen island. 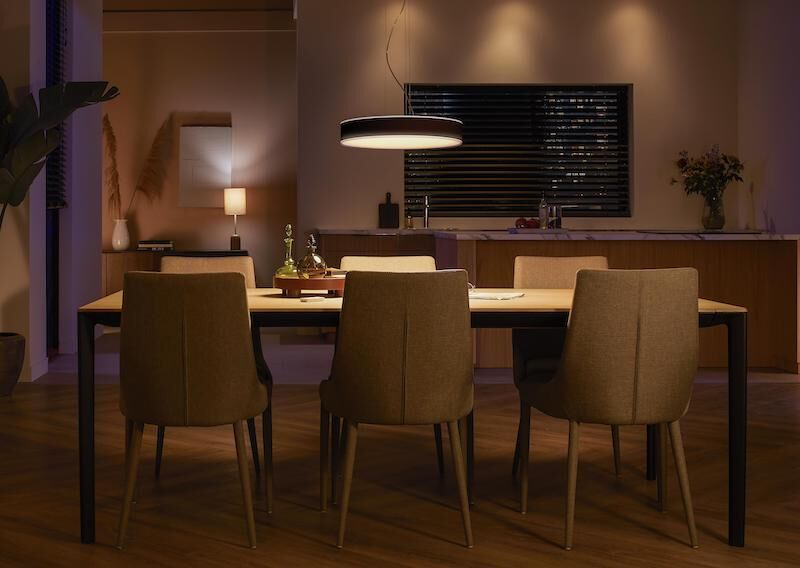 Building on the success of the Philips Hue Play gradient lightstrip, which is getting a mid-September update in Europe and October in the US, two new gradient enabled products are coming: the upgraded Signe lamp, which will be available in both table and floor models (£174.99/ £264.99) and the gradient light tube (from October, £159.99/ £174.99, depending on size). The latter is designed to sit above or below a TV and, like the new Signe lamp, will be available in black or white. 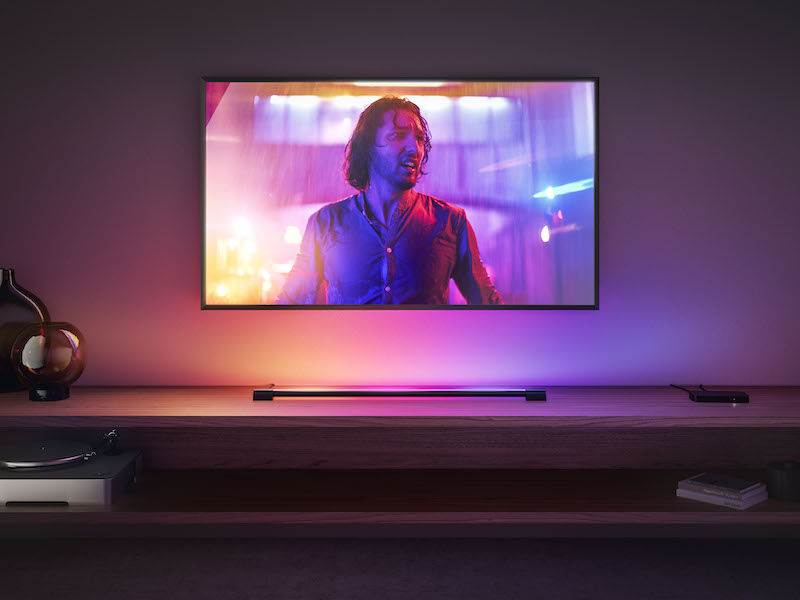 From September onwards, all of the retro-look Philips Hue filament bulbs will be available in White Ambiance, so you can adjust the temperature of the light from a blue-toned light suitable for working, to a warm, relaxing white. 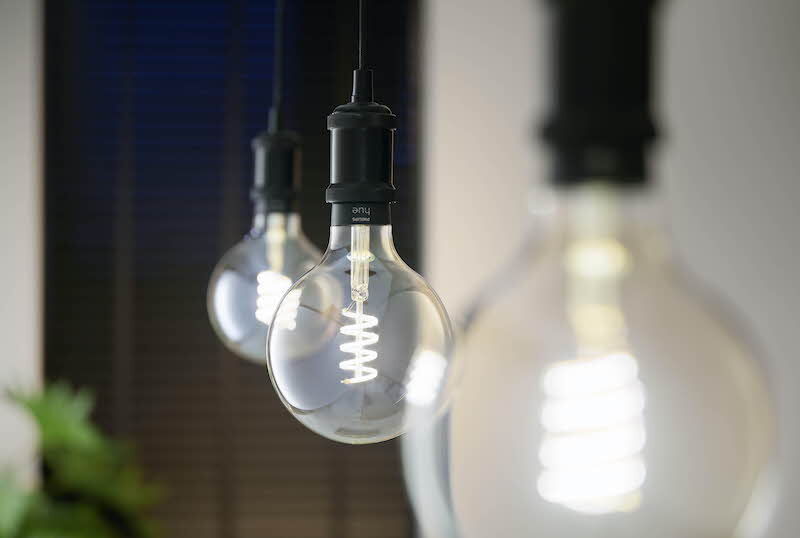 A new white filament E14 candle bulb will also be added to the range, as will 1100 and 1600 lumen variations of the Philips Hue smart bulb. Some of these products won’t make their way to the US until October.

From 1 September, the Philips Hue app 4 will feature dynamic scenes, which allow the lights in a room to transition through different colours.

Gamers will also be able to update their sync box for compatibility with 120Hz support.

All of the dates mentioned above are for UK releases of products. To find out more, visit the Philips Hue site.

To see which smart lights, we recommend, have a look at our round-up of the best smart lights we’ve tested.