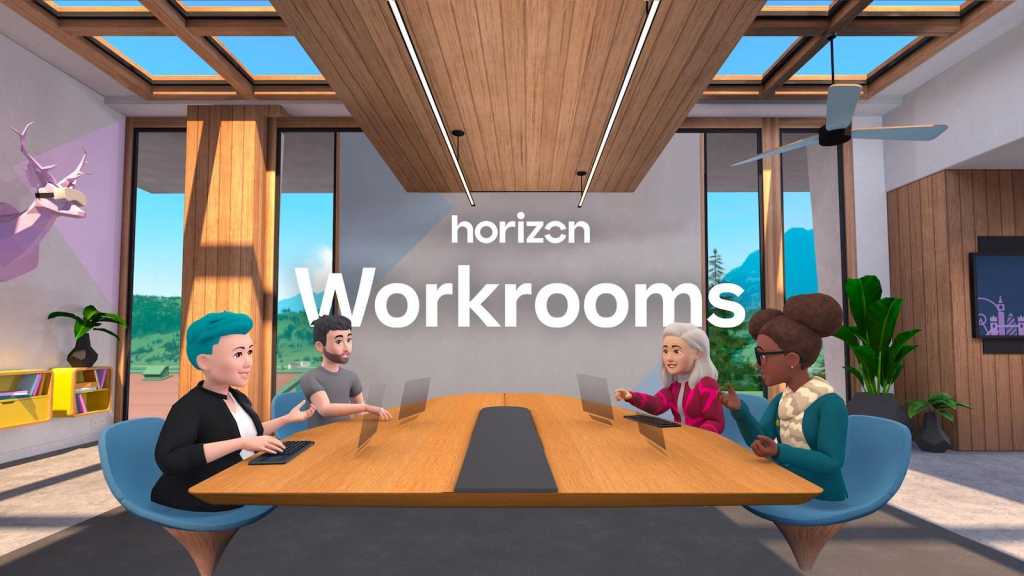 Facebook Horizon Workrooms is the next step in CEO Mark Zuckerberg’s metaverse vision; bringing workplace meetings into virtual reality with a number of features and new technologies that separate it from popular social apps like Rec Room – focussing on work and collaboration, rather than having fun with friends.

Here’s all you need to know about Facebook Workrooms, from the key features to the experience on offer, availability, pricing and what you’ll need to get started.

What is Horizon Workrooms?

Facebook Horizon Workrooms is an evolution of conventional video conferencing software, bringing people from around the world into a virtual space that feels natural.

It’s been designed with virtual reality in mind, meaning you’ll need a VR headset – and more specifically the Oculus Quest 2 – to enjoy most of the features available as part of Workrooms. Of course, not everyone has a VR headset to hand, so users will also be able to join workrooms via a web app, for a more traditional video call experience.

So, what does Workrooms offer?

The virtual space itself looks good, with an inoffensive, cartoony finish that doesn’t detract from the meeting at hand but still comes dressed with small details – like clouds moving past the loft window and smoke rising from nearby chimneys – all of which, ironically, make the space feel more real and alive. The views of the ocean, mountains and forests out of the window are a nice change too, especially if, in reality, you live in the middle of a built-up city!

There are a few layouts/scenes available, with the default space seating everyone around a circular table that automatically expands or shrinks depending on how many people are in attendance. This makes for easier collaboration and conversation directly with colleagues, but there are other modes available too.

Presentation mode turns the space into something resembling a classroom – complete with virtual whiteboard and conversation mode facilitates more casual catchups and brainstorming sessions. These spaces aren’t customisable at the moment, but such functionality is likely something Facebook could add in a future update, closer to release.

Workrooms also includes an extensive avatar creation feature, that offers an impressive level of detail and control, in a bid to help users create an accurate digital representation of themselves; it’s always handy if you recognise the colleagues you’re talking to in a VR session! These avatars are full-body creations, complete with arms and legs, not to mention a range of clothing options and accessories, but with the same signature cartoony look as the rest of the virtual environment.

Lifelike avatars are important because Workrooms is designed with hand tracking in mind – one of the reasons you need the Oculus Quest 2 specifically, in order to enjoy all that the app has to offer.

It essentially means that whatever you do with your hands in real life will be tracked and reproduced in the virtual world. Though it might not sound like much on the surface, hand gestures help us pick up on social cues and it feels much more natural than waving a controller around and selecting pre-configured gestures.

You can point at things, give a thumbs up to a colleague giving a presentation or anything else you’d do in the real world, and it’s one of the defining features that separates Workrooms from most alternative social apps.

There’s also full spatial audio support on offer in Workrooms, which means the audio of the person speaking will sound like it originated from wherever their avatar is sat in the virtual space; complete with subtle room reverberation that makes it sound lifelike. This further helps with immersion and is designed to help attendees feel like they’re actually in the same room.

There’s no noticeable audio lag either, making it easier to converse and brainstorm without those awkward pauses synonymous with typical video calling software.

For more, take a look at our ‘ What is spatial audio?‘ explainer.

Another feature that makes Facebook Horizon Workrooms stand out is its implementation of mixed reality; blending the real and virtual worlds to help immersion. It’s done in two ways; with your desk and with your keyboard.

When you first join a meeting you’ll have to trace the outline of your desk so it can be correctly mapped in VR. That means that if you lean on the virtual desk during meetings, you’ll feel your desk in real life. You can also bring your keyboard into VR, completely animated with true 1:1 positional tracking, allowing you to type just as quickly as you would in real life.

There’s also the option to bring your Mac or PC screen into the virtual space for notetaking, screen sharing or anything else. Setup is simple, only requiring a small download on the PC or Mac you’d like to access and a one-time setup process. Not only are the results are impressive but nobody else in the meeting can see what’s on your screen, aside from you – a benefit that even in-person meetings can’t compete with.

The humble whiteboard is a crucial part of brainstorming and collaboration, allowing users to jot down ideas, thoughts, doodles or just about anything else you’d use a whiteboard for. It’s also available in virtual form in Workrooms, with a huge whiteboard space available in each layout.

You can either physically stand up and walk over to the whiteboard, or you can use your desk as a mini canvas to write notes that then appear on the larger virtual board. What’s just as cool is how you do it; rather than using your hands, you flip the controller so the butt of the palm grip is touching the table, and write using that.

It’s another example of how mixed reality can really enhance the experience, and you don’t need much space to be able to do it either – just a clear space around 35cm on your desk to get started.

We had the chance to get some hands-on time with Facebook Horizon Workrooms ahead of release, briefed by Facebook’s VP of Facebook Reality Labs Andrew Bosworth, Director of FRL Work Experiences Mike LeBeau and Technical Program Manager Saf Samms. While we’re no stranger to social VR apps, on first impressions, the natural experience on offer from Workrooms seems far superior, even at this beta stage.

Meeting in Workrooms feels much more natural than standard video calling software, which can sometimes feel awkward and isolating (especially if everyone else has their webcam turned off!). That’s not the case with Workrooms, where you can ‘see’ all your colleagues looking at you and interacting with you when you speak.

It’s the combination of mixed reality (bringing your desk and laptop into VR), spatial audio and hand-tracking that separates Workrooms from most other VR-based collaboration apps. With these three combined technologies, you essentially forget that you’re in a virtual space within moments.

In fact, we’d go as far as to say that the virtual briefing we took part in was one of the most memorable remote briefings we’ve experienced, offering a more personal, true-to-life way of interacting with others without being in the same room, and we’d love to use it again in the future – once everyone has Quest 2 headsets, of course.

When is Facebook Horizon Workrooms going to be released?

Facebook Horizon Workrooms is available in beta form right now, to everyone that owns an Oculus Quest 2 headset. Simply download the Workrooms app from the Oculus Store to get started.

There’s no word on when it’ll come out of beta and head towards a full release, but the beta build we tested is certainly stable enough for everyday use.

While some traditional video conferencing platforms have limits on how many people can join or how long meetings can be without paying for a premium subscription, Facebook Horizon Workrooms is currently free to use; connecting up to 16 people in VR or up to 50 using a combination of VR and traditional video chat.

Being a virtual-first experience, the recommended way to use Facebook Horizon Workrooms is with a VR headset and more specifically, the Oculus Quest 2. The Quest 2 has not only the local processing power required to run the virtual workroom, but it has upgraded cameras and other tech to provide hand-tracking capabilities – a crucial part of the Workrooms experience.

Those still using the original Oculus Quest are out of luck though. According to Facebook, it’s not quite enough for what Workrooms requires, though it’s unclear whether this is down to processing power or the hand-tracking limitations of the first-gen headset stopping it from being compatible. Still, Facebook is adamant that you’ll only be able to access it on the Oculus Quest 2.

If you’re yet to pick one up, take a look at where to buy the Oculus Quest 2, for the latest deals.

If you’re going down the virtual route, you’ll also want to make sure you’ve got a physical desk to map into the virtual world, for a more tactile experience. There’s nothing quite like leaning on a virtual table and feeling it in the reality. Your desk space needs to be clear of any obstructions, especially if you want to use Workrooms’ whiteboard features. 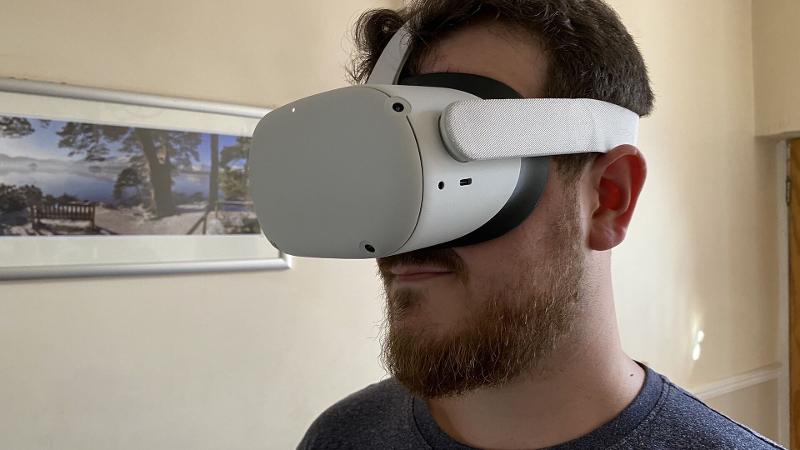 There’s also a limited number of virtual keyboards available right now, but we expect this list to grow over time. If you’ve got a recent MacBook, a Magic Keyboard or the Logitech K830, you can bring these into the virtual workroom for easier typing and a more natural meeting experience.

It’s not a huge issue if you don’t though; you can still activate passthrough on a section of your virtual desk to make it easier to see where your keyboard is in the real world.

For everyone that doesn’t yet have access to a VR headset, the good news is that, as previously mentioned, Workrooms is also accessible via a web app on Mac and PC.

This more conventional experience differs from the virtual one, rather obviously, but facilitates easy access to virtual workrooms and the ability to join in on the conversation without needing to install a dedicated app or buy a £300/US$300 headset.