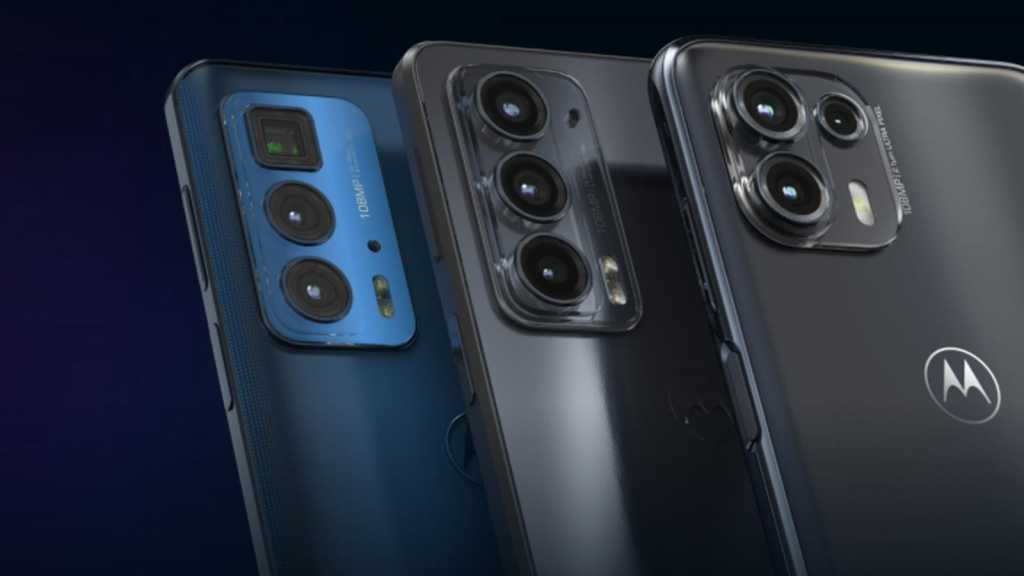 While chipsets and certain features (and, accordingly, prices) set the phones apart, they do share 6.7in OLED displays, a high refresh rate (up to 144Hz) and HDR10+. The phones also support the full DCI-P3 colour space, 10-bit colour, 30W fast charging (on batteries up to 5000mAh), and Motorola’s ‘Ready For’ feature for seamless phone-to-desktop use. As for cameras, all three phones lead with 108Mp main sensors.

The Edge 20 phones went on sale globally on 19 August. On the same day, Motorola announced the Motorola Edge (2021) – a North American exclusive handset due to release on 2 September. No stranger to confusing naming conventions, the Edge (2021) is essentially a variant of the Edge 20 phones as an upgrade to the original Edge. There are few features that set it apart from the Edge 20 line, however, such as a 6.8in LCD display

Here, we’ll focus on where to buy the phones and pricing in the UK, but if you want to deep dive into the specs across the three phones (and the Edge 2021), head to this handy article.

The Edge 20 range went on 19 August in UK and Europe and on 5 August in China.

Customers in the UK can buy the phones from select retailers. To sweeten the pot, Motorola is offering a free Lenovo M10 Plus tablet worth £109 if you order before 15 October (more on this below).

The Edge (2021) released on 2 September in the US, with a Canadian launch expected later. The phone is available to pre-order now with US$200 off.

Each phone is available in one storage and RAM configuration with prices as follows:

Free Lenovo M10 Plus tablet with the Motorola Edge 20 Pro

Customers in the UK who buy the Edge 20 Pro by 15 October 2021 can get a free Lenovo M10 Plus tablet worth £109. Currently, the Edge 20 Pro is available to buy directly from Motorola, Lenovo, Carphone Warehouse and Vodafone, O2 and Mobiles.co.uk.

The M10 Plus stock is limited to 2,000 devices. These will be given away on a first come first serve basis, so you’ll have to be quick.

Be sure to claim over at Motorola by 29 October so you don’t miss out. You’ll need to provide your full name, number address, IMEI, and proof of purchase with a dated receipt.

Here’s how to find your phone’s IMEI number.

Where to buy the Motorola Edge 20 phones SIM-free

Apart from buying the handsets from directly Motorola or Lenovo (parent company), confirmed retailers for the handset include Amazon, Carphone Warehouse, and John Lewis.

However, of the three retailers only Carphone Warehouse has all three phones listed and ready to buy (with next day delivery):

Amazon only has the Edge 20 Pro available.

Where to buy the Motorola Edge 20 phones on contract

Carphone Warehouse has all three phones listed and available to buy on contract too:

You can also buy the Edge 20 Pro and Edge 20 Lite from Vodafone on customizable Evo plan:

O2 has also listed its plans for the Edge 20 Pro with prices starting at £31.20 per month and £30 up front for 1GB data. Its current offer also slashes £20 off upfront costs. Customers can also customize plans and get data allowances anywhere from 5GB to unlimited data. 5GB plans or higher include free Disney+ or another streaming service of choice, while 30GB and higher includes six months of Apple Music and longer Disney+ trials.

All three phones are also listed on Mobiles.co.uk with plans available on Vodafone and iD Mobile.

Other confirmed networks include EE and  Tesco Mobile (for Motorola Edge 20) though we can’t see any plans listed yet.

We’ll update this article with other retailers and networks as we see them, so keep your eyes peeled!

See our review of the original Motorola Edge to see why it received 4/5 stars. We’ve also compared all the best Motorola phones separately.

Take a look at the best flagship, mid-range and budget phones on the market if you want to see what the Edge 20 handsets are up against.