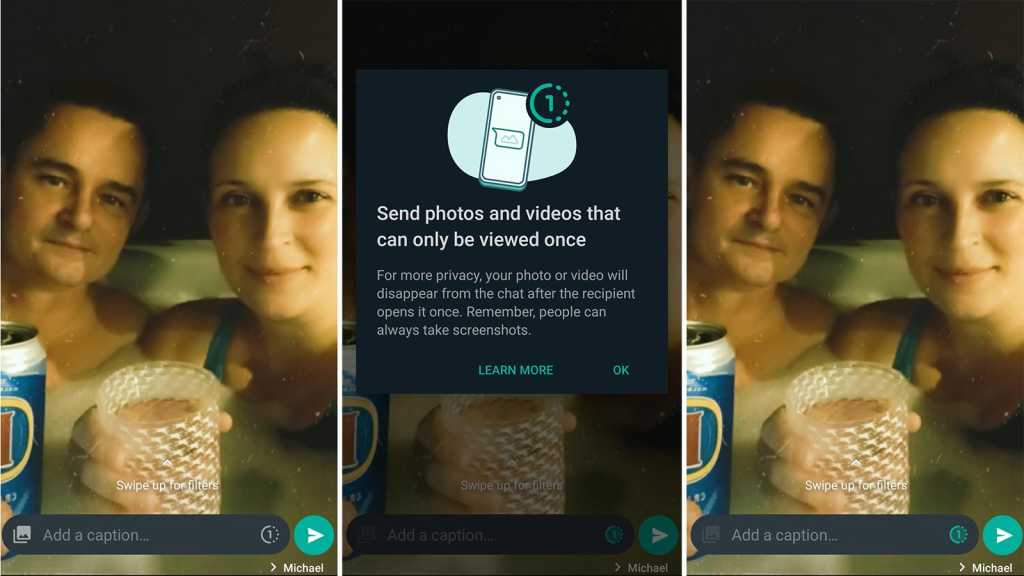 WhatsApp has rolled out a new feature that brings its messaging app into line with other social apps: the ability to send a photo or video that the recipient can view only once before it self-destructs.

We first wrote about this feature back in June when it entered beta, but it’s now just a standard part of the app.

We’ll explain in a few simple steps how to use the View Once feature… but also how to get around it.

You can update WhatsApp by visiting the Google Play Store or Apple App Store and checking for available updates.

To send a disappearing photo or video, open an existing chat with a contact or begin a new conversation. To attach an image to a message you can either tap the camera icon and take a new photo or video, or tap the paperclip icon and select one from your Gallery.

Tap the View Once icon

You’ll notice a new icon has appeared in the text field just to the left of the Send button: a circle with a 1 in the middle. Tap this icon.

The first time you do so you’ll get a pop-up informing you that the “Photo set to view once” so will disappear when the recipient has opened and viewed it once. Tapping it will also see it turn from white to green so you know it’s switched on.

Tap the Send button and a message will appear in the conversation thread that shows the View Once icon and confirms that a photo or video has been sent, but you are unable to see the media itself.

After the media has been viewed the message will change from ‘Photo’ or ‘Video’ to ‘Opened’ and the 1 will disappear from the icon. Your recipient will see the same message on their phone, and will no longer be able to view that media.

How to screenshot photos on WhatsApp without the sender knowing

In the pop-up that appears when you first use View Once, you are told that it is there to improve privacy, but warned that the recipient can still take a screenshot or recording.

What WhatsApp doesn’t tell you is that unlike other social apps (for example Snapchat and Instagram), it will not notify you if someone does exactly that. This means your photo or video that you thought would self-destruct might actually still be floating around somewhere without your knowledge.

According to WABetaInfo, WhatsApp says this is for your own good. Huh?

Because it is so easy to get around mechanisms that prevent you taking a screenshot without the sender knowing, WhatsApp says it doesn’t want to lull users into a false sense of security by allowing them to incorrectly assume that a screenshot cannot be taken without their knowledge.