Discrete graphics cards remain an oddity in ultra-portable laptops, and at best you can usually expect one of Nvidia’s basic MX-series cards. Not so in the new Acer Swift X, which somehow crams in an Nvidia RTX 3050 Ti while keeping the overall laptop both thin and light.

Nvidia’s latest laptop GPU brings with it support for features like Ray-tracing and DLSS, though Acer isn’t pitching the Swift X as a gaming device. Instead, the company sees it as a mainstream productivity device for workers and creators on the go who don’t quite need to make the jump to Acer’s ConceptD creator line.

It’ll also hold up to some gaming of course, but won’t rival dedicated hardware there. The 3050 Ti is ultimately a mid-range GPU, albeit one that’s impressively powerful for a laptop this size, though should still be able to drive modern games at 1080p – though adding ray-tracing into the mix will likely drop framerates down a little. If you need more than that, consider the newly announced Predator Triton 500 SE, which packs more powerful specs while still avoiding the stereotypical gamer aesthetic. 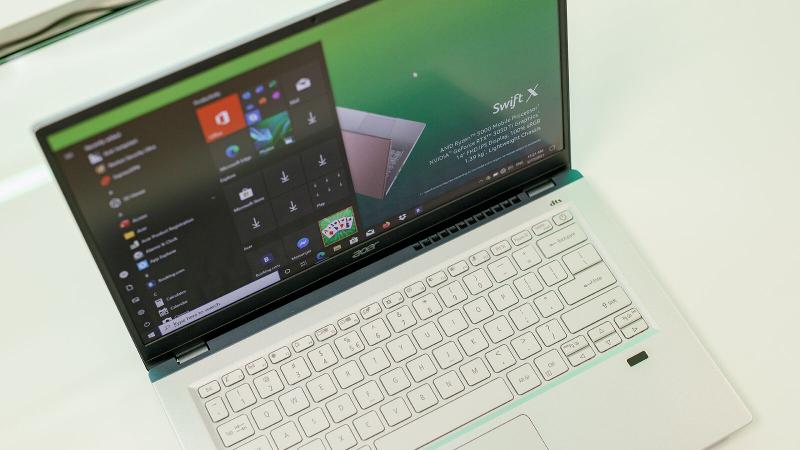 The internal hardware is all the more impressive considering the sheer size of the Swift X, which represents the start of a new line within Acer’s portfolio of Swift ultrabooks.

Like other Swift laptops, this prioritises portability. The aluminium chassis is just 17.9mm thick, and the whole laptop is 1.39kg (3.06lbs), making it lightweight even by 14in notebook standards.

It’s available in three colours: blue, gold, and rose gold, though all three have the same silver finish on the main body. You’ll have to Acer’s green lighting overpowering our photos.

In person it doesn’t feel quite as premium as Dell’s XPS line or Huawei’s MateBook X – it’s a little less refined, with fewer elegant design flourishes than either of those – but it also works out around half the price of either, so there’s that. 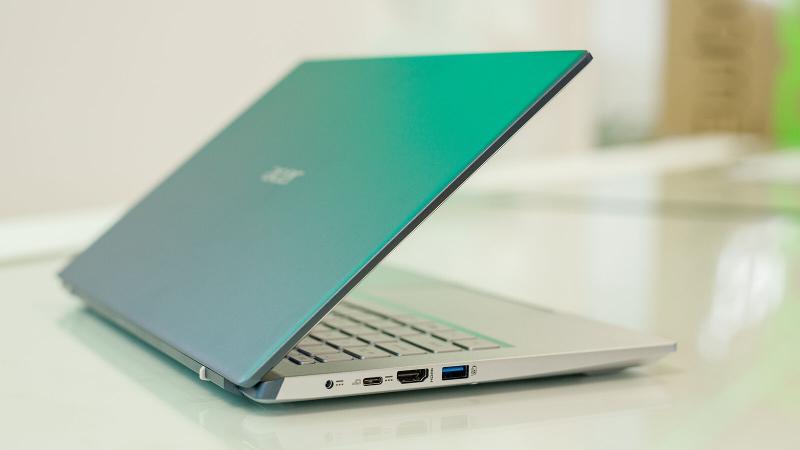 Despite the size, there are still plenty of ports, with two USB-A slots, a full-size HDMI, headphone jack, lock slot, and USB-C – though frustratingly this latter isn’t used for charging, with a separate dedicated power port.

If there’s another major weakness here it’s the display, at 1080p and IPS – not to mention a 16:9 aspect ratio – feels fairly basic. Creatives will likely lament the lack of 4K resolution or OLED, while gamers might prefer the higher refresh rate panels found on most gaming laptops.

On the other hand, few laptops with those display specs come in this portable and lightweight. Or this affordable, as with a starting price of £899/$899 when it launches this summer, the Swift X is an unexpectedly competitive offering of portable power to rival the best laptops of 2021.

Acer announced the Swift X as part of today’s Global Press Conference, alongside the reveal of its new SpatialLabs tech: glasses-free 3D that’s built into a laptop display, designed for 3D modelers and designers.