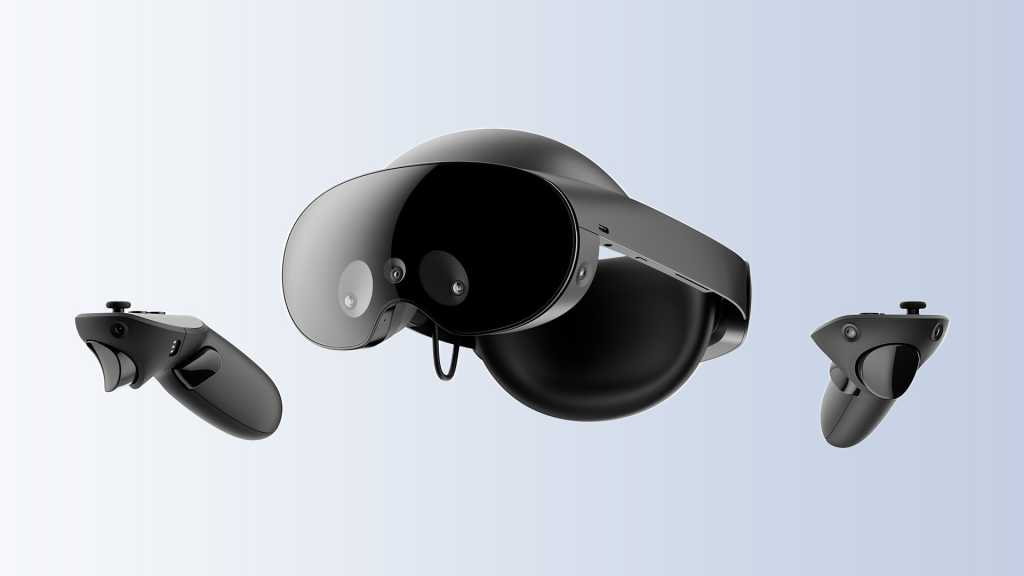 After years of teasers and leaks, the Meta Quest Pro is official. Revealed at Meta Connect 2022, the high-end headset has its sights set on Mixed Reality, boasting full-colour passthrough and a design specifically tailored to a comfortable MR experience.

Throw in a complete redesign with a much thinner head-mounted display, eye and face tracking, improved performance and upgraded controllers and you’ve got the most capable standalone VR headset on the market at the moment – on paper, anyway.

The question is, with such a high price tag, is it going to be as popular as the Meta Quest 2?

Here’s all you need to know about the Meta Quest Pro, formerly known as Project Cambria.

When will the Meta Quest Pro be released?

The Meta Quest Pro is available to pre-order now following the announcement at Meta Connect on 11 October, with the headset set to ship later this month on 25 October in the UK, US, Europe and other regions around the world.

How much will the Meta Quest Pro cost?

Meta has always been transparent that the Meta Quest Pro will cost much more than the entry-level Meta Quest 2, which comes in at $399/£399, but I’m not sure anybody was expecting such a pricy headset.

That said, the Meta Quest Pro comes in at a not-insignificant $1499/£1499/€1799, though it’ll come bundled with a charging dock, light blockers and stylus tips – more on those in a bit – to further sweeten the deal.

It’s certainly a price hike compared to the Meta Quest 2, but compared to other high-end PC-powered headsets like the $1399/£1299 Vive Pro 2, it delivers relatively good value for money. You don’t need a high-end PC to power the experience, and the facial tracking and lightweight design are particular unique highlights of Meta’s headset (unless you opt for aftermarket Vive accessories).

You can pre-order the Meta Quest Pro on the Meta website right now ahead of release later this month, along with retailers including Amazon and Best Buy in the US and Amazon, Argos and Currys in the UK. Once on sale, we expect the headset to become available from more popular third-party retailers.

We cover where to buy the Meta Quest Pro in more detail separately, and for a better idea of what’s on offer from the VR market, take a look at our pick of the best VR headsets.

As rumoured prior to launch, the Meta Quest Pro is quite the departure from the standard Quest formula, with extra sensors, new functionality and a much more lightweight, compact design.

What’s most obvious is the redesigned form factor on offer from the Meta Quest Pro, and in particular, a much smaller and thinner head-mounted display (HMD) than the Quest 2.

That’s down to the use of a pancake optic system, a significant upgrade on the Fresnel lens system of the Quest 2 and most alternatives on the market right now. Despite the more compact HMD, the headset boasts stats including a 40% thinner optical module, a 37% increase in pixel density (around 2K per eye), 75% more contrast and Mini-LED backlighting, which essentially translates to a crisper, more vibrant virtual experience with very little SDE (screen door effect).

In a bid to keep the HMD as compact as possible, Meta moved the battery to the rear of the headset, and it’s curved to fit the head. This not only makes the front of the headset lighter, but it stops it from feeling too front-heavy like some competitors.

There’s a particular focus on mixed reality with an open periphery design that essentially allows you to see your real environment along with the VR screen for a more comfortable, immersive MR experience. That’s paired with a smattering of cameras on the front of the headset, which delivers a 4x boost in detail compared to the Quest 2, and crucially, it’s all in colour.

That allows you to bring your home environment into the virtual world and do things like hang virtual paintings on your bedroom wall or place virtual objects on your real-world desk. It’s one of the biggest and most exciting features of the Quest Pro and we can’t wait to see what developers do with the upgraded tech on offer.

For those more interested in the traditional VR experience, the headset comes with magnetically attached side light blockers to block some of the outside world, and there will be an aftermarket accessory for a Quest-like full light blocker too.

Just as important as mixed reality is the inclusion of inward-facing cameras that track both your eye movements and facial expressions, with virtual avatars mimicking you in real time – a real boon for social VR apps, with more nuanced non-verbal communication – and it can also perform eye-tracked foveated rendering, which renders the highest resolution specifically where you’re looking at the display.

Of course, with all the fancy tech comes an upgrade in performance, with Meta partnering with Qualcomm to include the new Snapdragon XR2+ Gen 1 – the first VR headset to utilise the improved chipset – along with an increased 12GB of RAM and 256GB storage as default.

Qualcomm shared additional details about the chipset following the launch, with headline features including a new image processing pipeline that brings 10ms latency with full-colour passthrough, ideal for MR applications, along with support for 8K@60fps 360-degree video, improved head, hand and controller tracking, automatic room mapping, 30% improved thermal performance and a 50% boost to processing power too.

That’s paired with a new sleek form factor free of the large tracking ring present in previous Meta controllers, and there’s improved haptic feedback for a more immersive experience when handling virtual items. Meta also included an optional stylus nib that allows you to use the controllers for writing, great for collaboration in work-focused apps like Horizon Workrooms.

The only real downgrade compared to the Quest 2 is in the battery life department. The Quest 2 can last around 2-3 hours officially, but that has been downgraded to 1.5-2 hours for the Quest Pro, likely down to the lighter form factor.

Meta (of course) claims that the headset isn’t designed for all-day use, but there is a 2m USB-C cable in the box that’ll allow you to carry on using the headset for longer, ideal if you’re looking to use the Quest Pro for work.

Charging is primarily done via a sleek contact charging dock, which allows you to conveniently charge the headset and controllers without having to fiddle with USB-C cables and replaceable batteries.