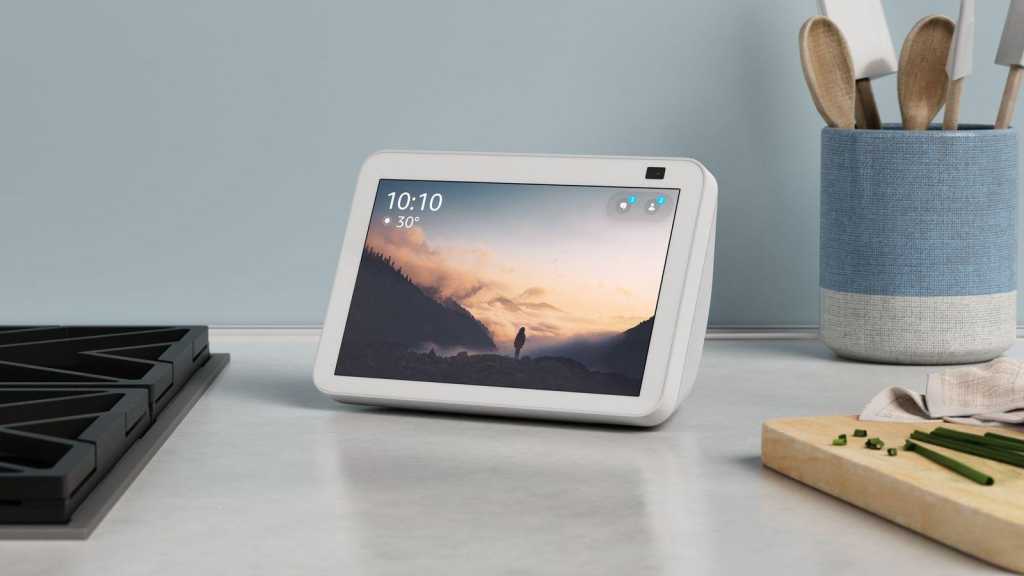 Amazon officially launched its new Echo Show 10 last September, complete with a tracking feature that can automatically keep you in shot during video calls, as well as causing the display to face you when you speak to Alexa. The company is now bringing a digital version of this technology to the more affordable Echo Show 8, which launches today alongside the budget Echo Show 5.

The design of the Show 8 is much the same as its predecessor, so there’s no motor which physically turns the screen as with the Echo Show 10.

Like the Echo Show 8’s predecessor, the new model has an 8.1in touchscreen display. Amazon only describes its resolution as ‘HD’ – expect that be the same 1200×800 panel as before. Fairly large bezels mean there’s plenty of room for the all-important 13Mp camera, which now has a physical camera cover to protect your privacy. There are also stereo speakers, but don’t expect them to produce Show 10-quality sound.

Amazon is also advertising a ‘new octa-core processor’, which should mean performance is improved over the first-gen Show 8. The Alexa ecosystem is getting smarter all the time, with everything from Netflix to BBC Good Food offering supporting both voice and touch input. There’s still no official YouTube app, though.

This 8in form factor means the Echo Show 8 can also be an effective digital photo frame, with Prime members getting unlimited cloud storage via Amazon Photos. It’s available in Charcoal and Glacier White.

The Show 5 has many of the same features as its larger sibling, albeit in a much more compact form factor that’s designed for bedside use. It has a 5.5in display – despite Amazon not quoting resolution, it’s likely close to the 960×480 we saw on the original.

There’s also an upgraded HD camera, which supposedly has double the pixels of its predecessor. In addition to the Charcoal and Glacier White from the Show 8, the Show 5 is also available in Deep Sea Blue.