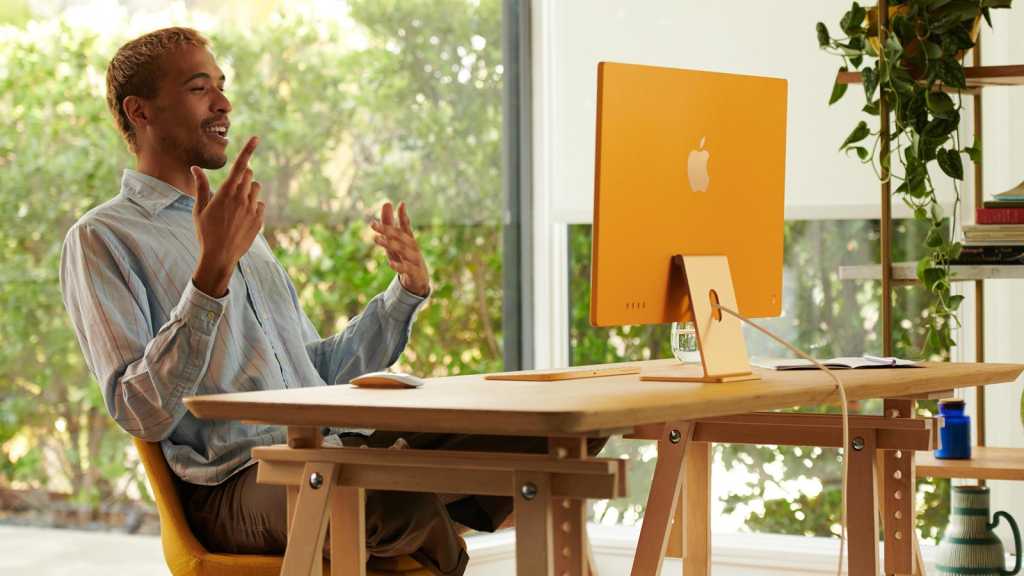 The M1-powered 24in iMac made its debut at Apple’s April 2021 Spring Loaded event, sporting an entirely new design compared to its predecessors.

As a throwback to older generations of iMac, the devices ship in an assortment of colours; but unlike the past iterations, the 4.5K Retina display is totally flat, with slimmer bezels, a smaller chin, and just 11.5mm thick.

That slimmed-down, chiselled look is mainly down to the M1 chip’s SoC architecture. The M1 also boosts performance by up to 85%, with up to double the GPU speed, making demanding tasks such as 4K video editing on multiple streams without dropped frames in Final Cut Pro possible.

The 24in iMac also features a 1080p FaceTime HD camera, studio-quality microphones, and a six-speaker setup with added Dolby Atmos support. If you want to learn more about the specs and features of the M1 iMacs see this handy article.

We’re tracking all the places you can buy the 24in iMac right here, along with our selection of the best deals available right now.

We’re separately looking at where to buy the new MacBook Pro laptops with the M1 Pro and M1 Max chips if you want something portable.

How much does the 24in iMac with M1 cost?

Before we dive into where you can pick up the 24in iMac at the lowest price, here are all the retailers that sell the device. Price aside, you may be able to find bundle offers that take your money further.

If you’re based in the US, check out the following retailers for M1 iMac stock:

Here’s everywhere you can buy the 24in iMac in the UK below:

Where can I buy a refurbished 24in iMac with M1?

Apple itself is offering hefty discounts on the 24in iMac in the US when you buy refurbished. Get a $260 discount on the top-end 24in iMac with 8-core CPU and GPU and 512GB of storage, bringing it down to a more tempting $1,439 – cheaper than buying the mid-range variant.

It’s worth pointing out that Apple’s refurb process is top-notch, with some refurb products near-identical to that of brand-new models – albeit without the original packaging. If you’re tempted, you can browse the range in the US right now, and we’re hopeful that it’ll appear in the UK refurb store soon.

Educational Pricing on 24in iMac with M1

Apple is also offering educational pricing with up to £195 off. The first two configurations will be reduced as follows:

Here’s how to get Apple’s Educational discount.

If you are looking for a bargain on Apple laptops, consider the 13in M1 MacBook Pro or M1 MacBook Air instead.