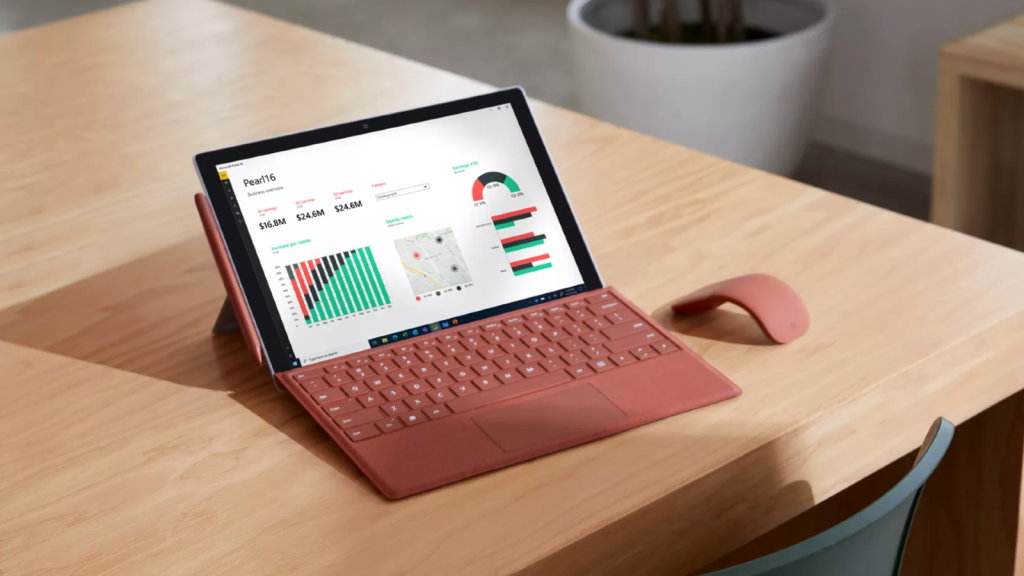 When Microsoft launched the original Surface in 2012, few could have predicted the impact it would have on the future of the PC. The device itself did little to convince consumers that a tablet could ever replace your laptop, years before Apple popularised the debate. It ran Windows RT, a Windows 8 spin-off which was just as negatively received as the full thing. Performance from the Nvidia Tegra processor was severely lacking, while 2GB of RAM wasn’t enough for many productivity tasks.

However, despite being poorly received, the device offered a useful blueprint for what was to come. The experience was transformed with the introduction of the first keyboard accessory a year later, making the first Surface Pro a genuine 2-in-1 device.

It also transitioned to a full version of Windows 8, although the Surface Pro line didn’t become a real force until it moved to Windows 10 in 2015. The convincing experience it provided on the Surface Pro 4 felt like the first time a 2-in-1 could credibly replace a laptop. Apple’s first iPad Pro launched in the same year, but the limitations of iOS meant it felt a long way behind the curve.

Microsoft has continued to refine the Surface Pro line in recent years, with the 7 and 7+ offering the most complete experience yet. However, a modern design appears to have been reserved for the Surface Pro X, with its ARM-based system yet to be fully embraced by everyday consumers.

You could be forgiven for picking up a Surface Pro 4, a device that’s now six years old, and mistaking it for one of the latest models. There have been plenty of changes under the hood, but the Pro 7 doesn’t offer the huge performance gains to justify three generations of upgrades.

While it’s disappointing not to see more wholesale design changes, it’s hard to blame Microsoft for resting on its laurels somewhat. For a few years, the Surface Pro was the default 2-in-1, with very little direct competition.

Plenty of manufacturers were releasing laptops marketed as 2-in-1s, but a 360° hinge offers a very different experience to a fully detachable tablet and keyboard. Meanwhile, some tablet makers – Windows or otherwise – completely stopped making them altogether.

However, that’s begun to change in recent years. An increasing number of genuine 2-in-1s are coming to market, both from established manufacturers and those new to the sector. The most obvious candidate is Apple’s 2021 iPad Pro, where the power of the new M1 chip will, in theory, deliver Mac-grade performance in an ultra-portable form factor.

Apple has experimented with keyboard accessories for years, but 2020’s Magic Keyboard felt like the first time it had really nailed the design. That came at a cost though (£349/US$349 to be exact), meaning you’re paying significantly more than the equivalent Surface Pro 7 with Type Cover.

Fortunately, there are now plenty of other affordable alternatives on the market. The most obvious example is from Microsoft itself, with the Surface Go 2 offering a shrunk-down version of the Surface Pro at a fraction of the price.

You do sacrifice slightly on performance and screen size, but it offers a lot of functionality for not much money. Then there’s Chuwi’s UBook X, a device that delivers the fundamentals of a great 2-in-1 experience at a fraction of the cost.

Chrome OS devices have also got in on the act, with Lenovo’s IdeaPad Duet Chromebook offering a similarly compact experience at an even more affordable price point.

Conversely, if money’s no object, there are some excellent options besides the iPad Pro with Magic Keyboard. Again, Microsoft is an active force here, with its own Surface Book 3 arguably offering the most complete 2-in-1 experience on the market.

The tablet itself is relatively bulky, though, and you’ll pay handsomely for the privilege. But Lenovo is also well represented. The ThinkPad X12 Detachable has the exact same 12.3in screen size as the Surface Pro 7, as well as more ports and a keyboard and stylus included in the current US$1,099 (approx. £790) starting price.

As you can see, there are now a wealth of options in the increasingly popular 2-in-1 sector. The Surface Pro 7 remains the most well-known device of its type but it’s no longer the default choice. If Microsoft doesn’t deliver significant upgrades in the upcoming Surface Pro 8, it could mean consumers look elsewhere.

Microsoft’s release schedule has been upended due to the pandemic, so we can no longer expect a new Surface Pro each October. Many of the rumoured new features made their way into January’s Surface Pro 7+, so concrete information surrounding the Pro 8 is relatively thin on the ground. There are rumours that Microsoft is considering a design change to go alongside internal upgrades – without it, the device will struggle to compete.

The new M1 iPad Pro leads the competition. The pure tablet experience is streets ahead of the Surface Pro, but iPad OS limitations mean it’s still less versatile than the Pro 7’s full version of Windows. The ThinkPad X12 Detachable is therefore the outstanding candidate, but Lenovo will have to ditch the IdeaPad’s business demographic in order to resonate with consumers. Until then, the Surface Pro keeps its nose in front, but sticking with the same design means it’ll soon be hard to recommend.