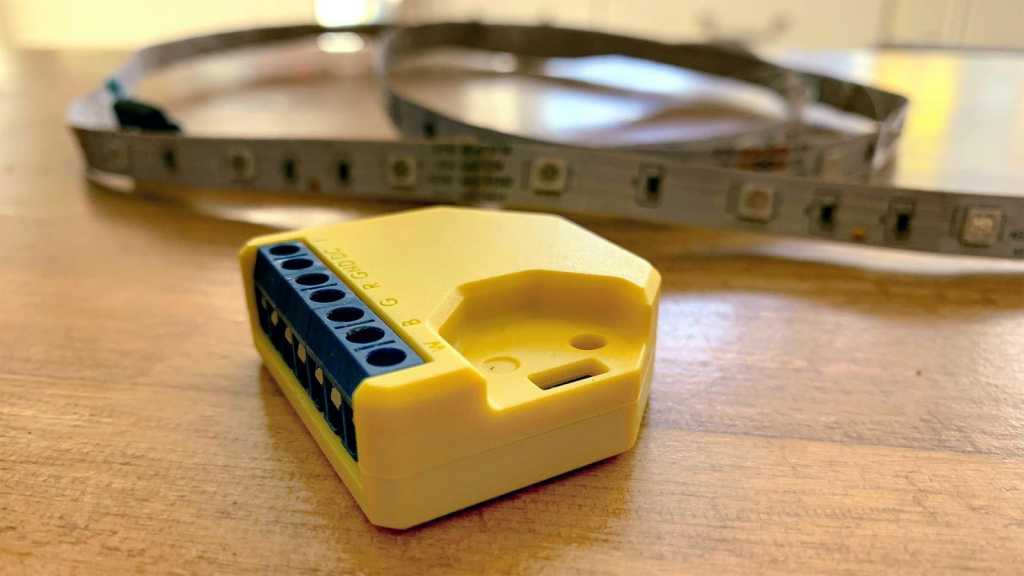 When I first tried out a LIFX Z LED strip, I was amazed at how it was able to produce a range of white colours along with great-quality colours. Compared to cheap LED strips, which were fairly dim and couldn’t produce realistic yellows or whites, it was a revelation.

Now, I know that it’s because it’s not your average LED strip. It has two sets of LEDs on the strip, one for colours and a separate set for white.

You can buy these yourself, or at least a very close approximation: it’s what’s known as RGBWW. This stands for red, green, blue, warm white. That’s the ‘warm’ type of white light as opposed to the cold-looking regular white LEDs which aren’t usually too welcome in homes.

RGBWW strips can be used together to create a wide variety of colours and, of course, with the Philips Hue or LIFX strips, you can control them from your phone and with Alexa or Google Assistant.

If you want several of them in your home, it really starts to become costly.

The good news is that there’s an alternative that costs a lot less, and as long as you can operate a screwdriver, you can put it together yourself. 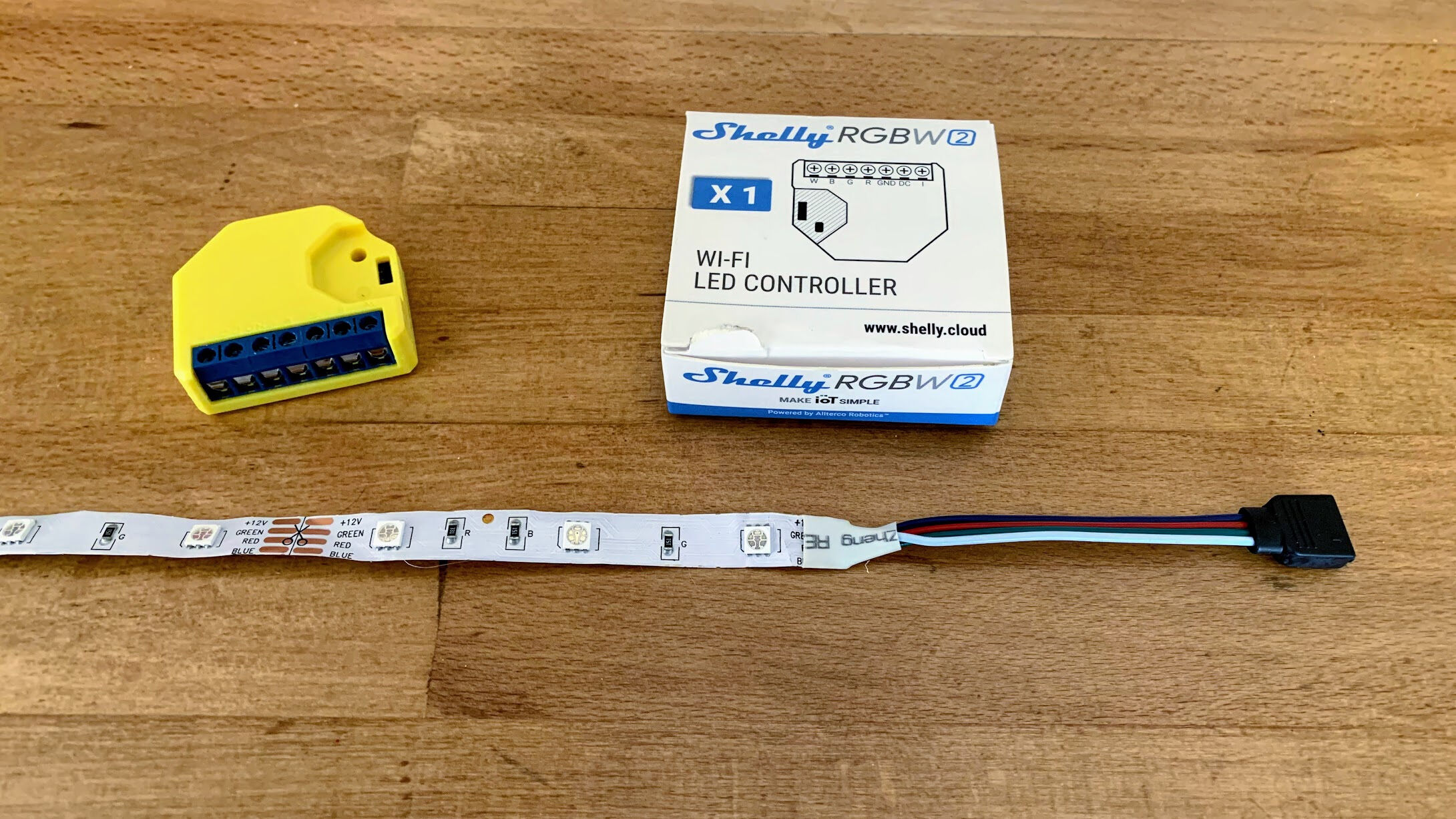 The total cost is around £31 / $45, but don’t forget you’re getting 5m of LEDs, not just 2m. The only limitation is that the Shelly RGBW2 can make the strip only a single colour, so you can’t have different colours in different sections as you can with Philips and LIFX.

If you’re thinking “wait a minute, I can buy an Alexa-compatible LED kit from Amazon for half that price” then yes, technically you can. But these don’t come with power supplies, tend to be RGB-only strips without white and – from my experience – have terrible, low-quality Wi-Fi chips which will continually drop off your Wi-Fi network… if you can get them connected in the first place. While Shelly’s app isn’t great, once setup, the RGBW2 is very reliable. (You can also buy it direct from Shelly where you’ll find similar Wi-Fi gadgets.)

If you don’t want to wait a couple of weeks for a delivery from Aliexpress, you can find these components on Amazon, ebay or other online retailers, but you’ll pay more for them.

If you want higher brightness, you can instead order a 24V LED strip and 24V power supply: the Shelly will work on both voltages. Of course, if you only want colour and not whites, you can buy a slightly cheaper RGB LED strip, but it’s worth going for SMD5050 LEDs rather than the smaller SMD3528 as the latter will be dimmer.

When choosing a power supply, be sure it can deliver enough power for the LED strip you’ll use. It’s better to go for more amps than your strip needs to avoid overloading it. As a guide, a 5m RGBWW LED strip will consume around 15W per meter.

Once your components have arrived, grab an electrical screwdriver, some wire cutters (or scissors) and a wire stripper (or sharp knife).

If you prefer not to cut the connector off the end of your brand new power supply you can buy an adapter which converts the connector into two screw terminals.

Since I’m not going to use my power supply for anything else, it’s simplest to cut off the connector, strip the wires and insert them directly into the Shelly RGBW2.

I also found it simplest to cut the plastic connector off the end of the LED strip, but you can buy extension cables if you want to mount the Shelly further away from the LED strip.

I’m using an RGB strip here, but if you go for an RGBW or RGBWW, the fifth wire simply needs to be connected to the W terminal. 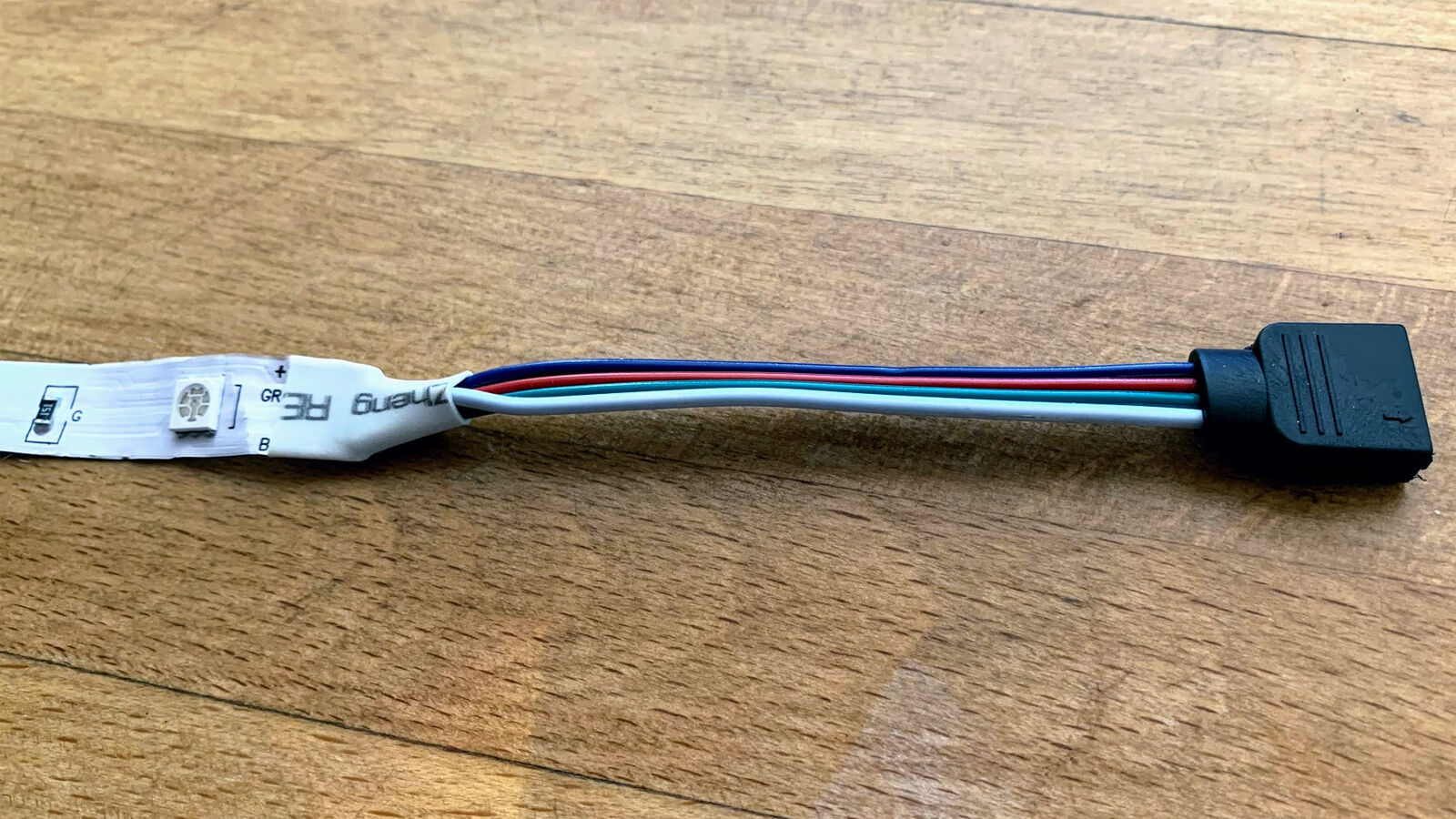 Strip around 5mm off the LED wires and screw them into the corresponding terminals, with the power wire (which will be either white or black depending upon your strip) inserted into the DC terminal on the Shelly. 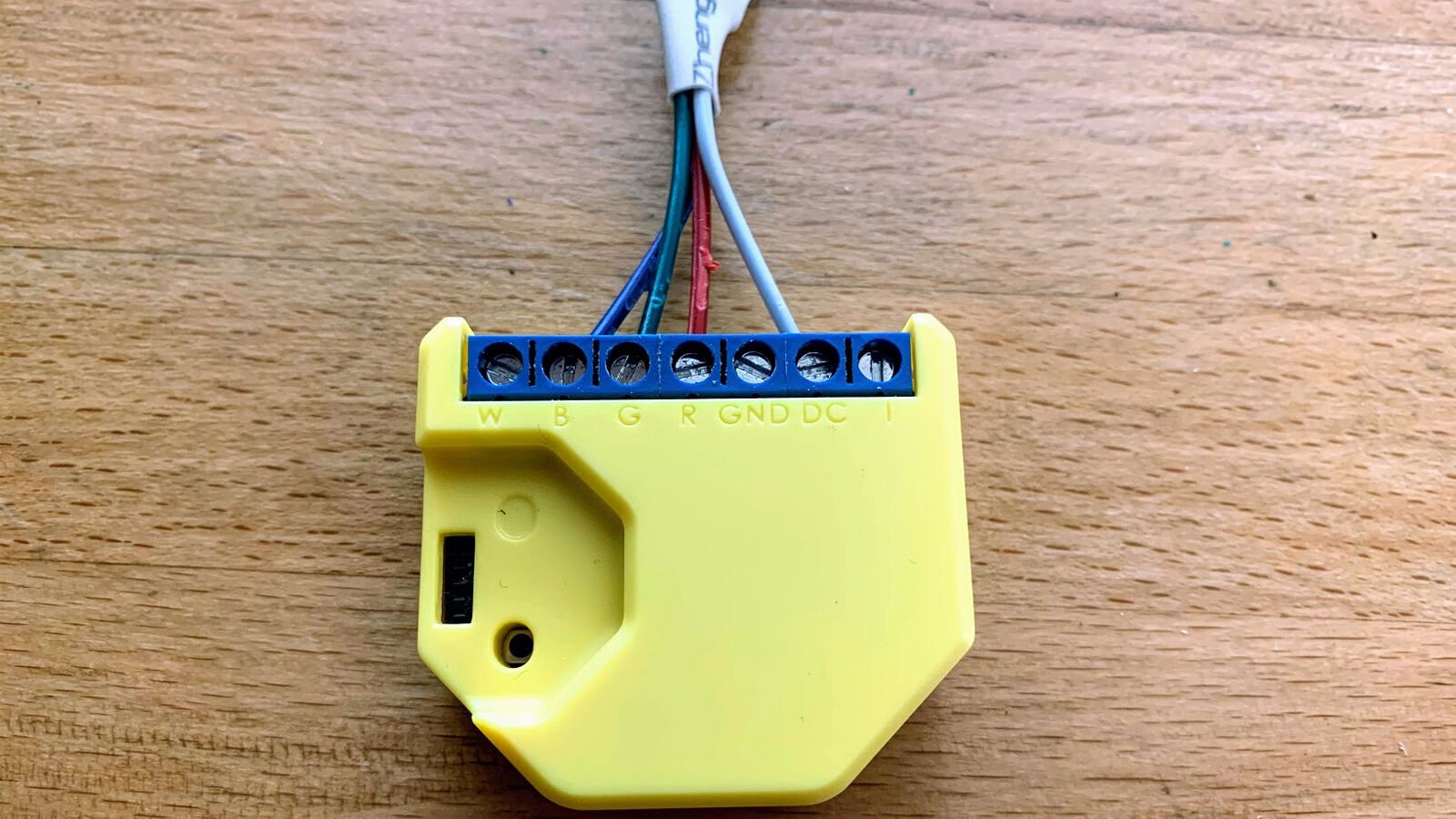 Insert the positive wire from your power supply into the DC terminal as well and the ground (or negative) wire into the GND terminal. If you don’t know which is which, use a multimeter and with the power supply plugged in and turned on, check which way round you need to touch the positive and negative leads to get a positive, and not negative, voltage reading.

Make sure the screws are all tightened down, then plug the power supply in and turn it on.

The LED on the Shelly should blink to indicate it has power. If it doesn’t, you’ve connected your power supply wires in reverse, so swap them over.

Now, install the Shelly Cloud app for Android or iOS. Launch it and create an account with an email address and password.

Log in (and verify your email address if prompted) and you’ll see a bare-looking screen.

Tap the three horizonal lines at the top right and then tap Add Device. Select your Wi-Fi network and enter the password, then tap NEXT. 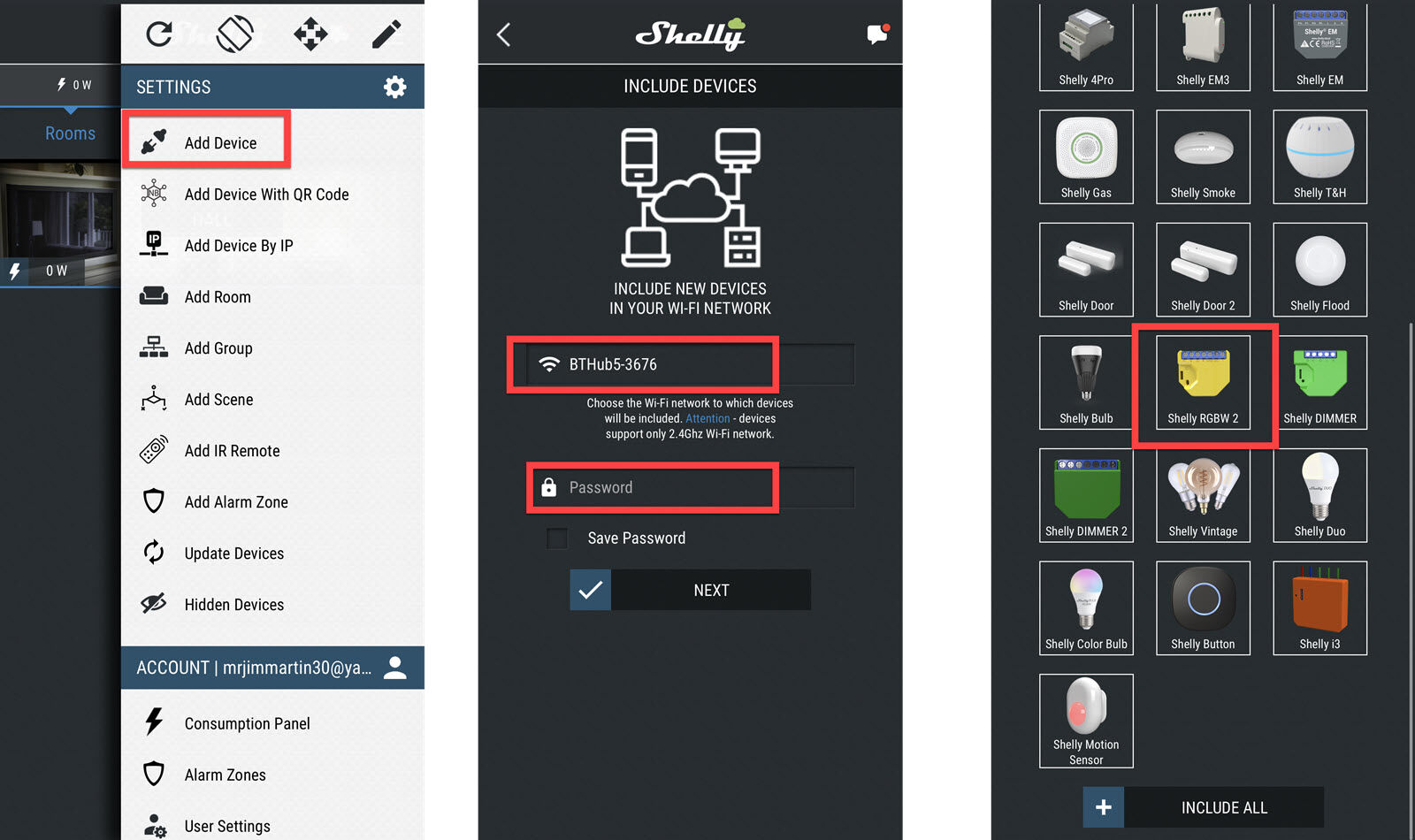 Scroll down the list and tap on Shelly RGBW2. The app will search and should quickly find your controller. Things may vary slightly on Android, but on an iPhone tap Join to connect to the RGBW2’s own Wi-Fi.

The RGBW2 should appear under ‘Discovered devices’ and you can then tap on the ‘CLICK TO ADD’ button. 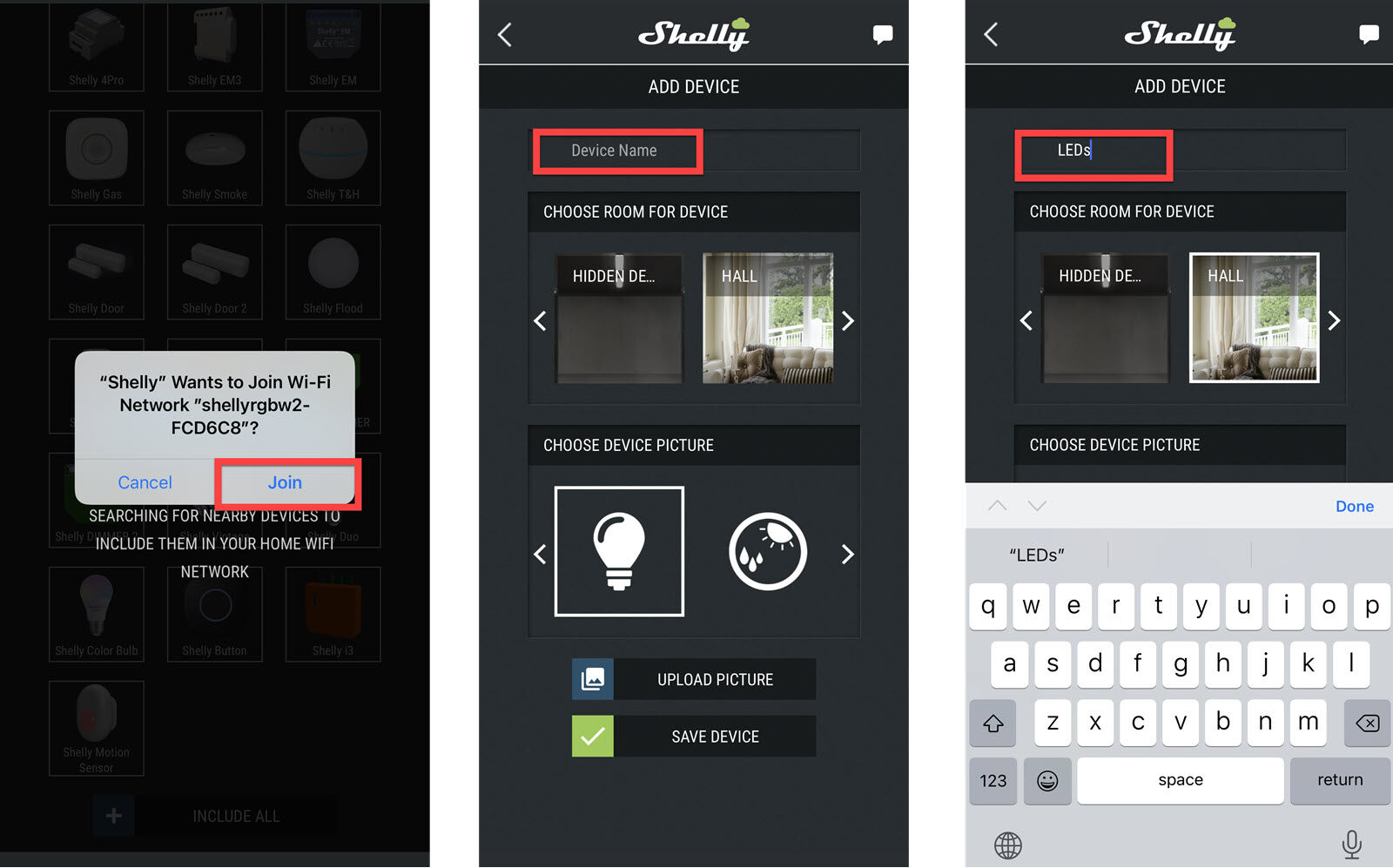 Now, you need to tap on Device Name and call your LED strip something meaningful (such as ‘kitchen’ or ‘cabinet’) and tap on a room. (You may need to choose Add Room from the main menu if you have no rooms set up, but do this later and assign it as a Hidden Device for now.)

Choose an icon for your LEDs, or upload a photo, and tap SAVE DEVICE.

Note: if you don’t see the RGBW2 on the app’s home screen after adding it, open the main menu and tap on Hidden Devices. It should show up there, and you can then assign it to a room.

Once added successfully to a room, you can tap the power icon to turn it on and off, but tap its name to take you to the settings where you can choose colour, brightness and effects. 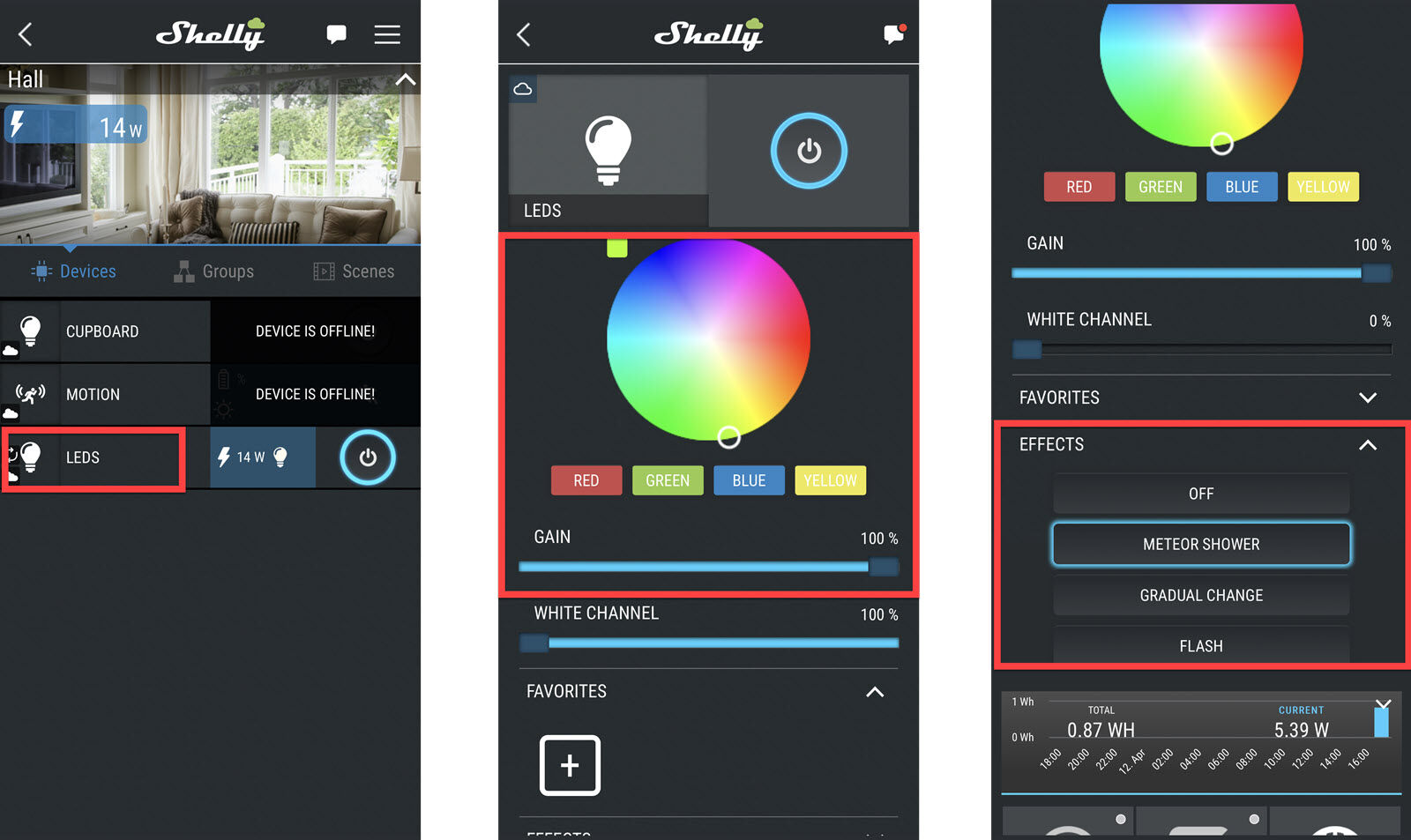 To control the LEDs with Alexa, open the Alexa app on your phone and tap More in the bottom right corner. Tap Skills & Games and then tap the magnifying glass (top right) and search for Shelly Cloud.

Tap Enable To Use and when prompted, enter your Shelly email address and password to link the skill to your Shelly account.

Alexa should automatically discover the new light, but if you have problems, disable the skill and re-enable it, re-run discovery and hopefully it will work. You can also disable Cloud in the Shelly app and then re-enable it: this seems to fix the problem for some people.

Once Alexa has found the device, it will show ‘1 light found and connected’ and ask you where it’s located in your home. Pick a room from the list and that’s it. You should now be able to say “Alexa turn on Strip” or whatever you entered under Device Name in the Shelly app. 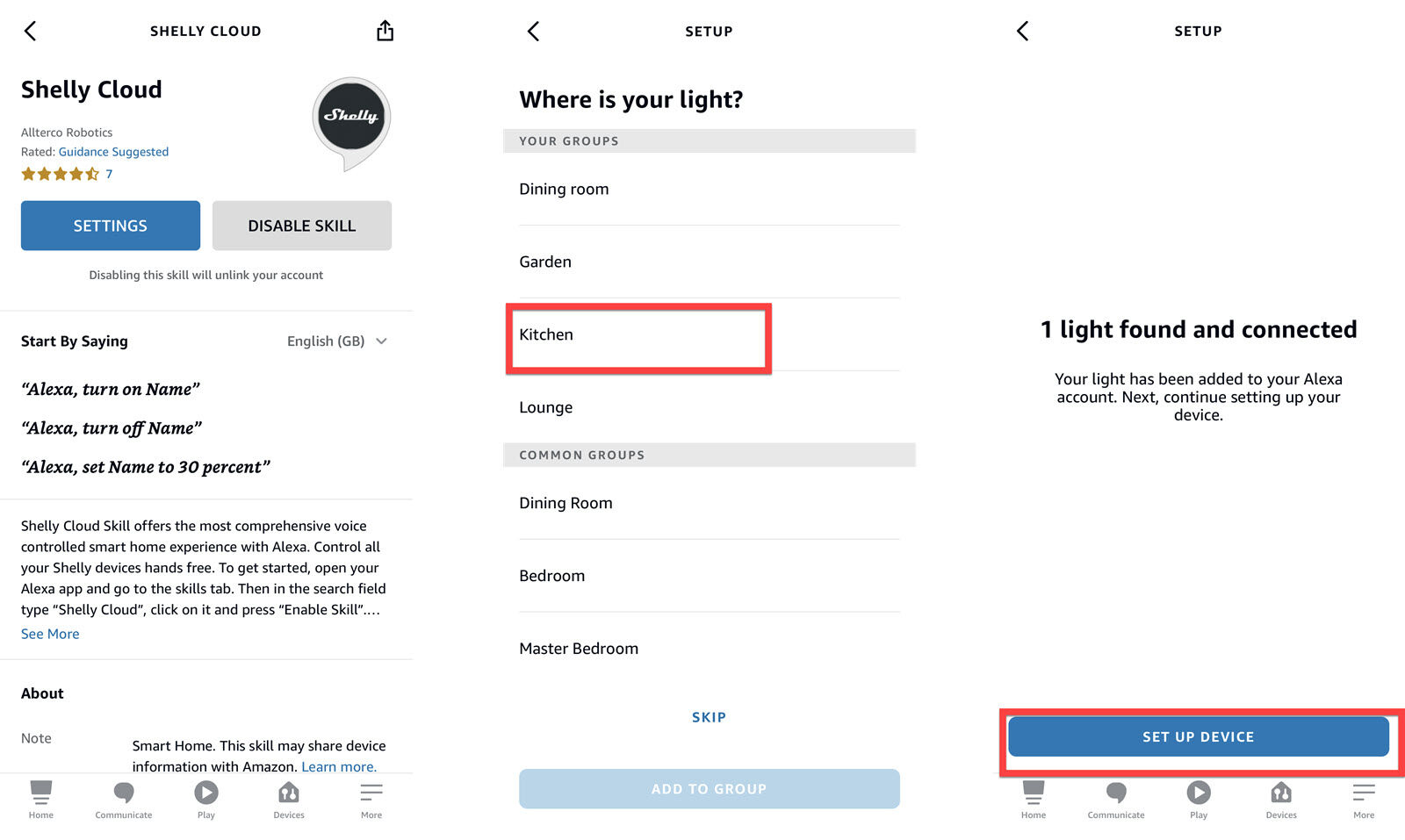 You can also control colour and brightness by saying “Alexa, make Strip green” and “Alexa, set Strip to 50 percent”.

There are lots of settings in the Shelly app which you can adjust by tapping on the name of the device, scrolling down to the bottom (below the colour options) and tapping Settings.

Here you can make sure the voltage is set to 12 or 24V, and choose what happens to the LEDs when you turn on the power supply, such as ON, OFF or Restore Last Mode.  Under Device Type, make sure Colour is ticked, not white.

Unfortunately, you can’t select between RGB and RGBW strips, so if you ask Alexa to make an RGB strip white, it will simply go dark as there are no white LEDs on it.