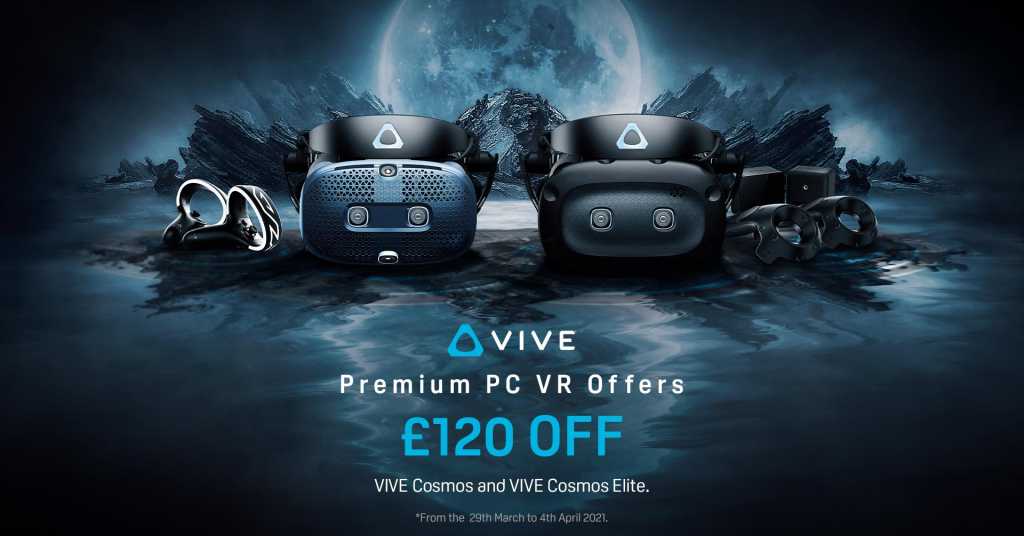 To celebrate the shift from the cold winter months to the (hopefully) warmer season of Spring, HTC Vive has kicked off a week-long sale across the Cosmos family, offering £120 off both the entry-level Cosmos and high-end Cosmos Elite. If you’ve been waiting to pull the trigger on the latest PC VR headset from HTC Vive, now could be a perfect time.

The sale, available not only directly via HTC Vive itself but retailers including GAME and Scan in the UK, brings the cost of the entry-level Cosmos down to £575, and you’ll be able to pick up the Cosmos Elite for £779. While we’ve seen discounts on the high-end VR headset in the past, it’s the biggest sale so far – even the crazy Black Friday shopping season only saw discounts of £100 in the UK.

If that’s not enough, the likes of Amazon are currently offering next-day delivery on the discounted headset range, meaning you might be playing with your shiny new HTC Vive Cosmos as soon as tomorrow – and if you’ve got Prime, next-day delivery is free.

The sale is set to run from today, 29 March 2021, until 23:59 on 4 April 2021 but, as with all sales, stock is likely to shift quickly, so we’d recommend investing sooner or later if you’re tempted by this amazing Cosmos discount.

So, what is the difference between the Vive Cosmos and Vive Cosmos Elite? It mainly comes down to tracking capabilities. The entry-level Vive Cosmos employs the same inside-out tracking used by the likes of the Oculus Rift S and Oculus Quest 2, using a range of built-in cameras and onboard smarts to visualise your environment and your place within it.

It’s a simple system that allows you to slip the headset on with no setup, but the downside is that the tracking isn’t quite as reliable during fast-paced VR games and experiences, with the occasional loss of tracking. There’s also the issue with controller blind spots – like when reaching behind your back for a weapon in Half-Life: Alyx – that can cause momentary loss of tracking. If you’re playing a fast-paced shooter like Population: One, that could be the difference between life and death.

For those that need accurate 1:1 tracking no matter what, the Vive Cosmos Elite is likely the better option. Using base stations to calculate your position within a tracked space, the Cosmos Elite is as true-to-life as VR moment comes, but there’s an added cost beyond the initial premium: you’ll need to set up base stations wherever you want to use the headset.

It’s not quite as simple as putting the headset on and getting lost in virtual worlds, but the extra setup time should translate to a more reliable, immersive experience.

Oh, and it’s worth stressing once more that you’ll need a high-end gaming PC to use either the Vive Cosmos or Vive Cosmos Elite – these aren’t like the standalone Oculus Quest 2, which negates the need for any kind of PC or cabling.

If you’re still unsure, we’ve taken a look at both the HTC Vive Cosmos and Cosmos Elite, and discuss whether it’s worth the upgrade in our review: HTC Vive Cosmos review: Is the Elite upgrade worth it? and we’ve also broken down the best VR headsets right now if you want a better understanding of the flavours of VR available in 2021.