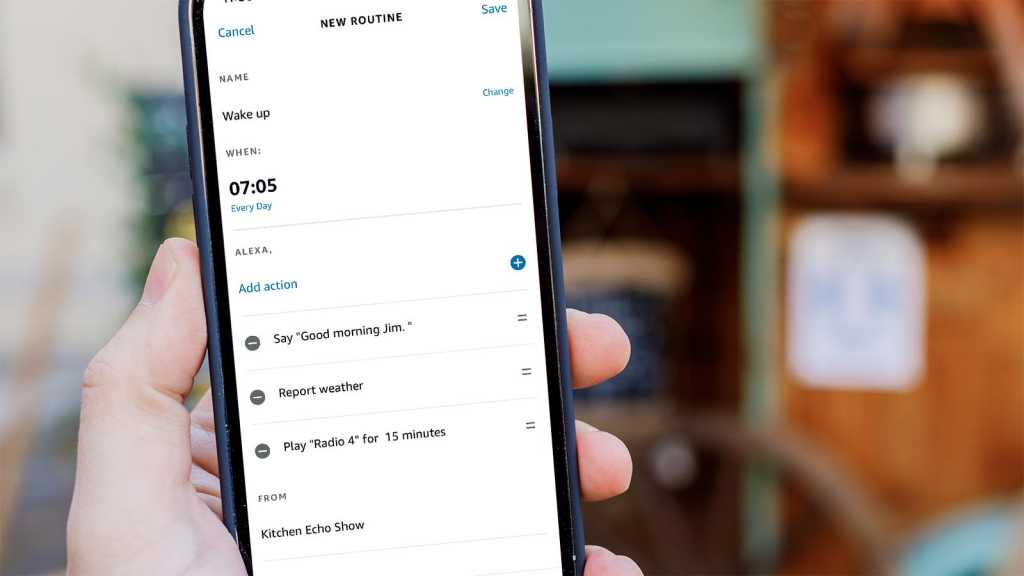 Amazon introduced routines so that Alexa can make things happen automatically without you having to ask her to do the same things all the time.

Maybe you want your lights to turn on just after sunset and then turn off when you usually go to bed. Or, perhaps you want Alexa to turn every light and smart plug off in and lock the doors when you’re in bed.

In the morning, you can use a routine so that Alexa will greet you, tell you the weather forecast and play a particular radio station. If you have motion or other sensors, you can use those as triggers in routines, so you could get Alexa to remind your child to do their homework when motion is detected in their room after school.

You can get Alexa to say anything you like as part of a routine, such as “Remember to do your homework” by typing in a custom message. Actions include:

There are endless possibilities: it’s up to you what you use these automations for. Setting them up is easy, and we’ll show you step by step how to create an Alexa routine in the app.

Let’s use the morning routine as an initial example. You’ll need to have at least one device with Alexa, though that doesn’t have to be an Echo: it could even be the phone on which you’re using the Alexa app.

How to make a custom morning Alexa routine

First, open the Alexa app and tap More in the bottom-right corner.

Tap Routines, then tap the + icon in the top-right corner.

Tap on Enter routine name, and type in Wake up, or something meaningful so you can identify it from the list of routines. In fact, you don’t have to enter a name at all, but when you have several routines set up, it becomes very difficult to know which is which. 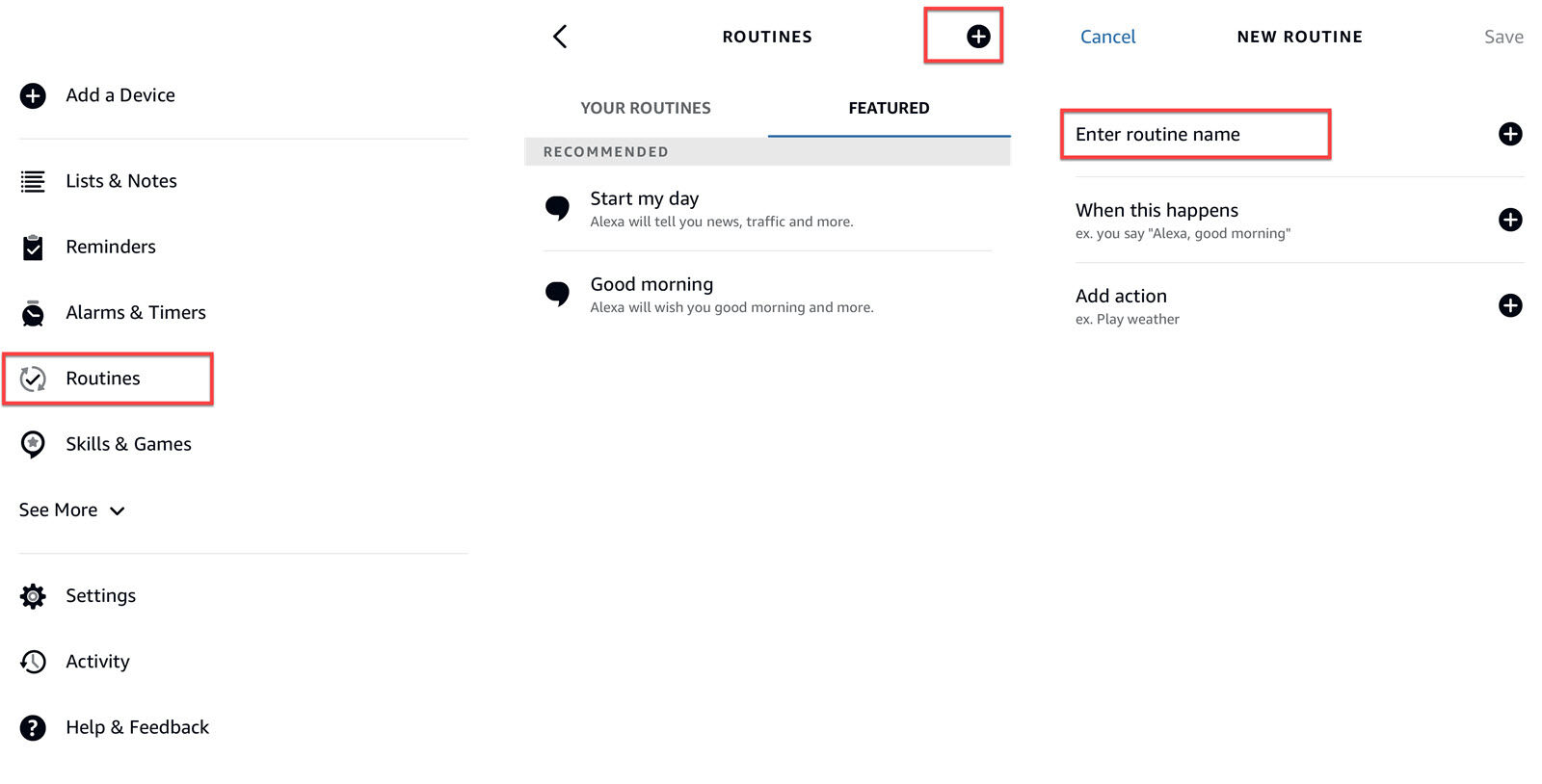 Tap Next at the top, and you’ll return to the previous screen. Now tap ‘When this happens’ to see the list of actions (the thing that happens to trigger the routine). It can be your voice command, a particular time (and day), a smart home device, an alarm or an Echo button.

Our morning routine will happen automatically at 7:05am every day, so tap Schedule and then ‘At Time’. On the next screen tap At Time: and select 7:05 or whatever time you want the routine to happen. If you only want it to run on weekdays, then tap the two circles marked ‘S’ in the REPEAT section so that Saturday and Sunday are grey and not black.

Tap Next, then tap Add action.

This will display the full list, so tap Alexa says to add a greeting. You can pick from the pre-defined messages or tap Customised to enter your own. 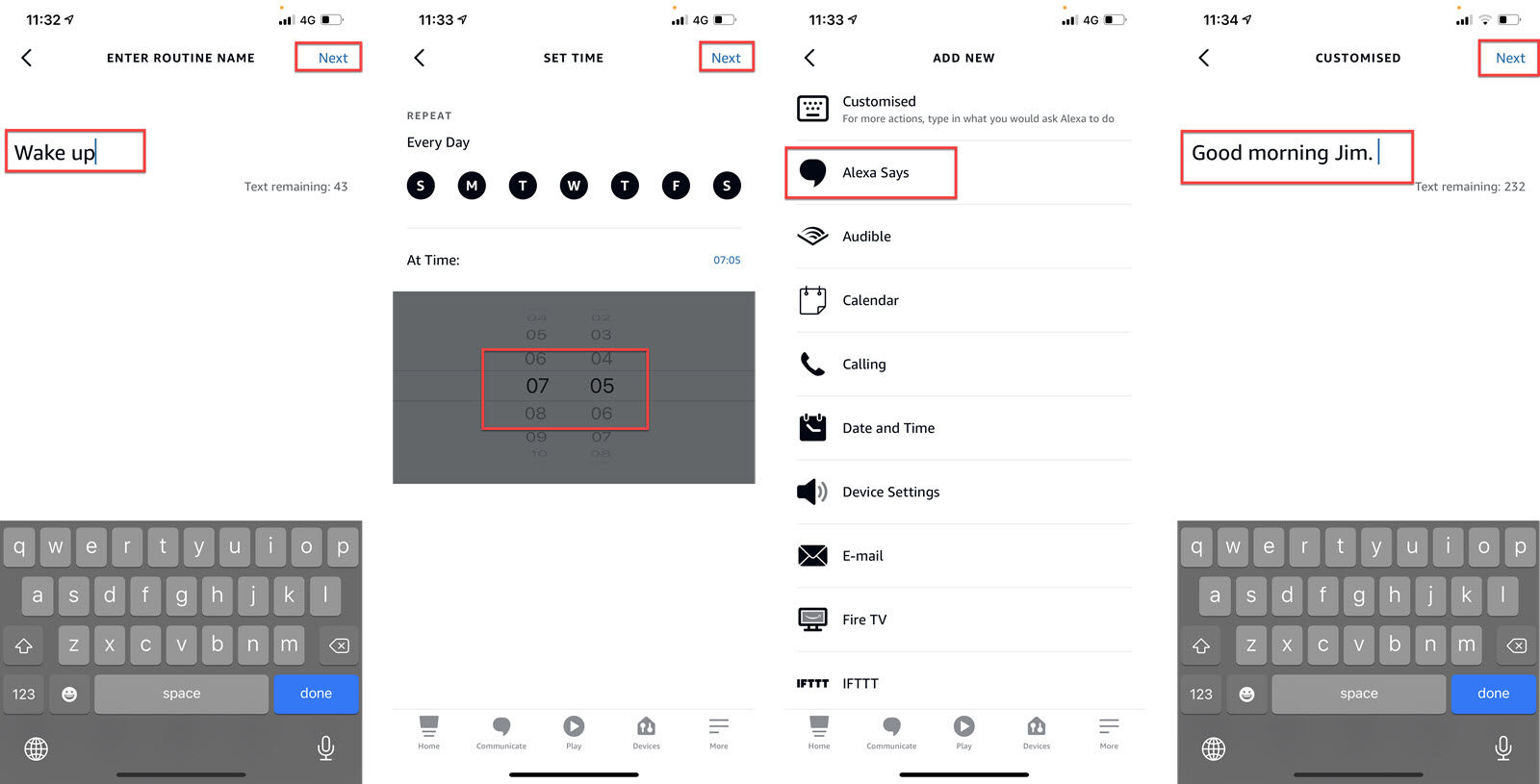 When finished typing, tap Next. You’ll see the summary of your routine, and you could at this point tap Save if you don’t want any other actions to happen. We do, so tap the + symbol next to Add action and scroll down and tap Weather. There are no options here, so tap Next and the weather forecast will be added to the routine below the custom greeting you just set up.

Tap Add action again and this time tap Music and type in the song, artist, podcast or radio station you’d like to listen to after the weather forecast. Optionally, you can choose which provider it will play from.

You can also use the Timer option to play for a certain amount of time.

Tap Next, and the routine is finished. You can change the order of the actions when you have more than one of them by tapping and holding anywhere on an action and dragging it to the position you want. 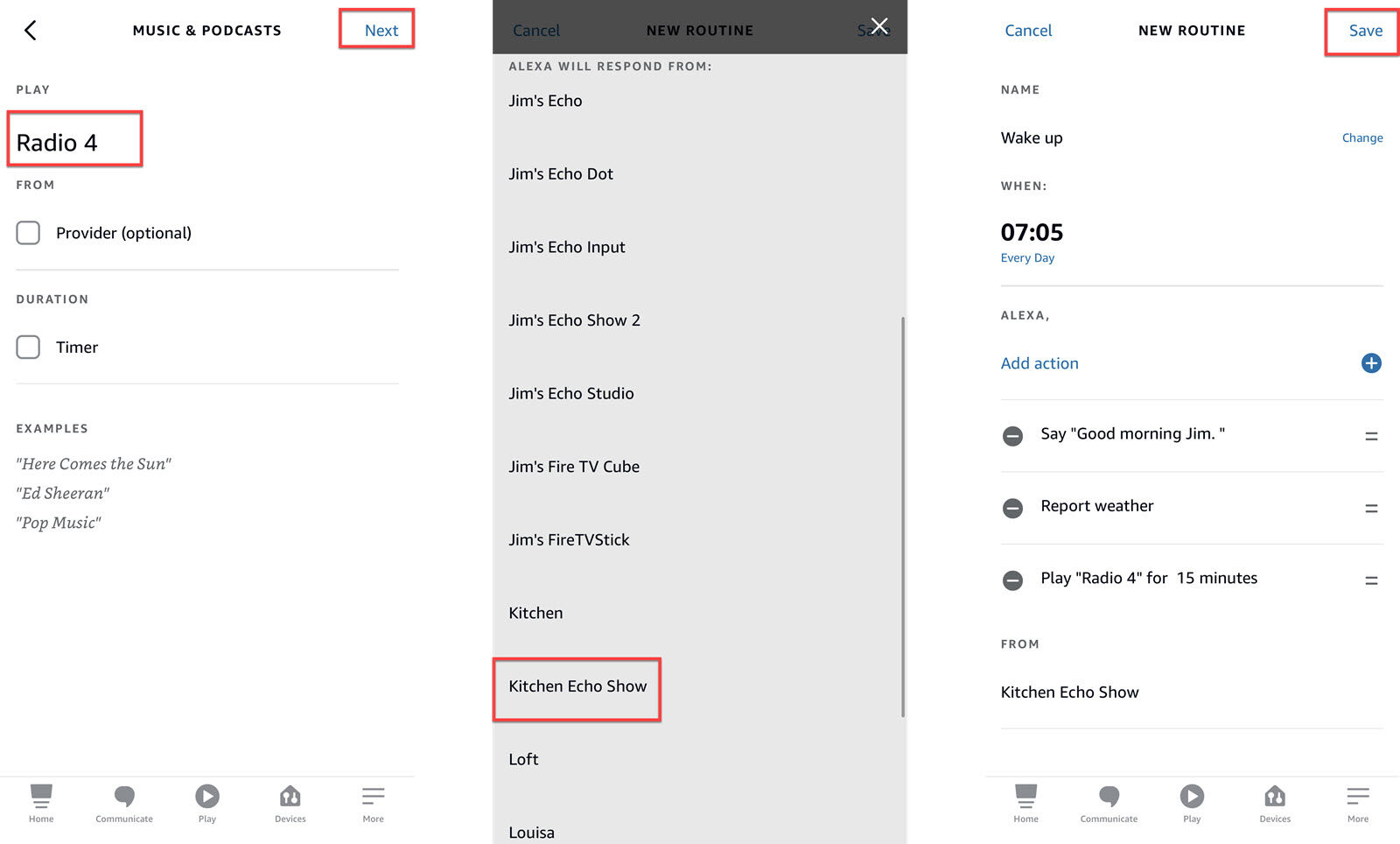 Finally, tap Save at the top and then choose which device ‘Alexa will respond from’. In other words, which device you want your morning routine to run on.

After that, the routine will appear in the YOUR ROUTINE section.

Note: if you want the option to run the same routine on demand by asking Alexa, instead of waiting until a specific time, you’ll need to create a separate routine where the ‘When this happens’ part is set to Voice, not a schedule. Fortunately, you don’t have to the work again: just tap on the original routine, then tap the three dots in the top-right corner and tap Copy Actions to a New Routine. This menu also lets you change the ‘When this happens’ trigger, which otherwise seems to be impossible, and we hope Amazon adds the option to the main routine screen rather than hiding it in this menu. 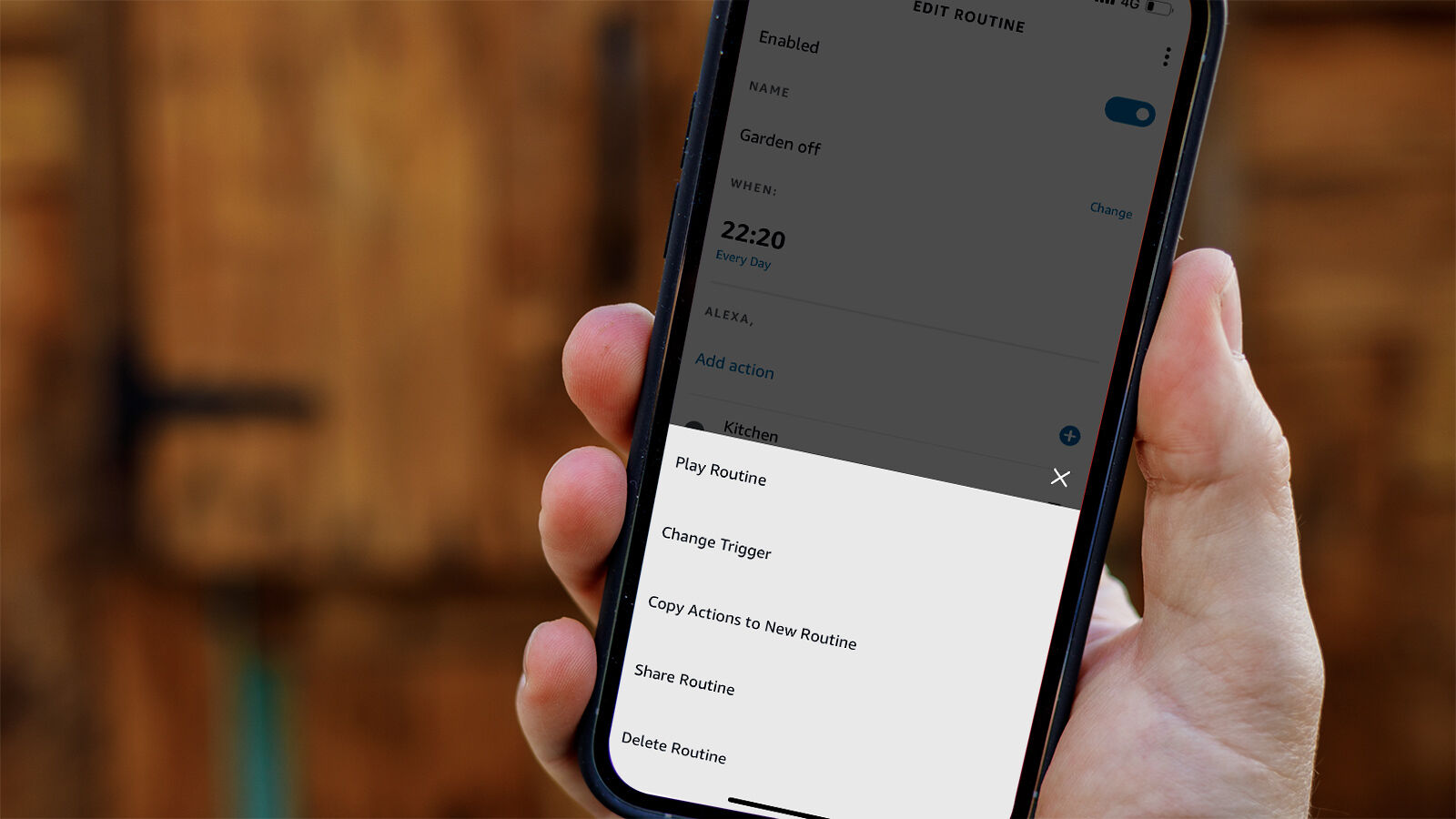 When you tap Voice, you have to enter the phrase you’ll say to run the routine. This can be the same as the scheduled routine name if you like, such as “Wake up”, but you can type anything.

Make lights turn on and off with Alexa routines

Let’s say you want to make a lamp turn on and off at specific times. You’ll need either a smart light bulb in the lamp, or a smart plug you can plug your lamp into, which is already set up in the Alexa app.

We’ll use a smart plug in this example, and get the lamp to turn on 30 minutes after sunset and then turn off at 10:30pm. This requires two separate routines, one to turn it on, and a second to turn it off.

1. Tap More in the Alexa app, tap Routines and then tap the + symbol.

2. Name the first routine “Lamp on” and tap Next. Tap ‘When this happens’ and tap Schedule.

3. Tap Sunset, then drag the slider right until it shows 30. This is a little fiddly, at least on the iPhone app, and hopefully Amazon will fix it and make it easier to use and see the number, which your finger currently covers! 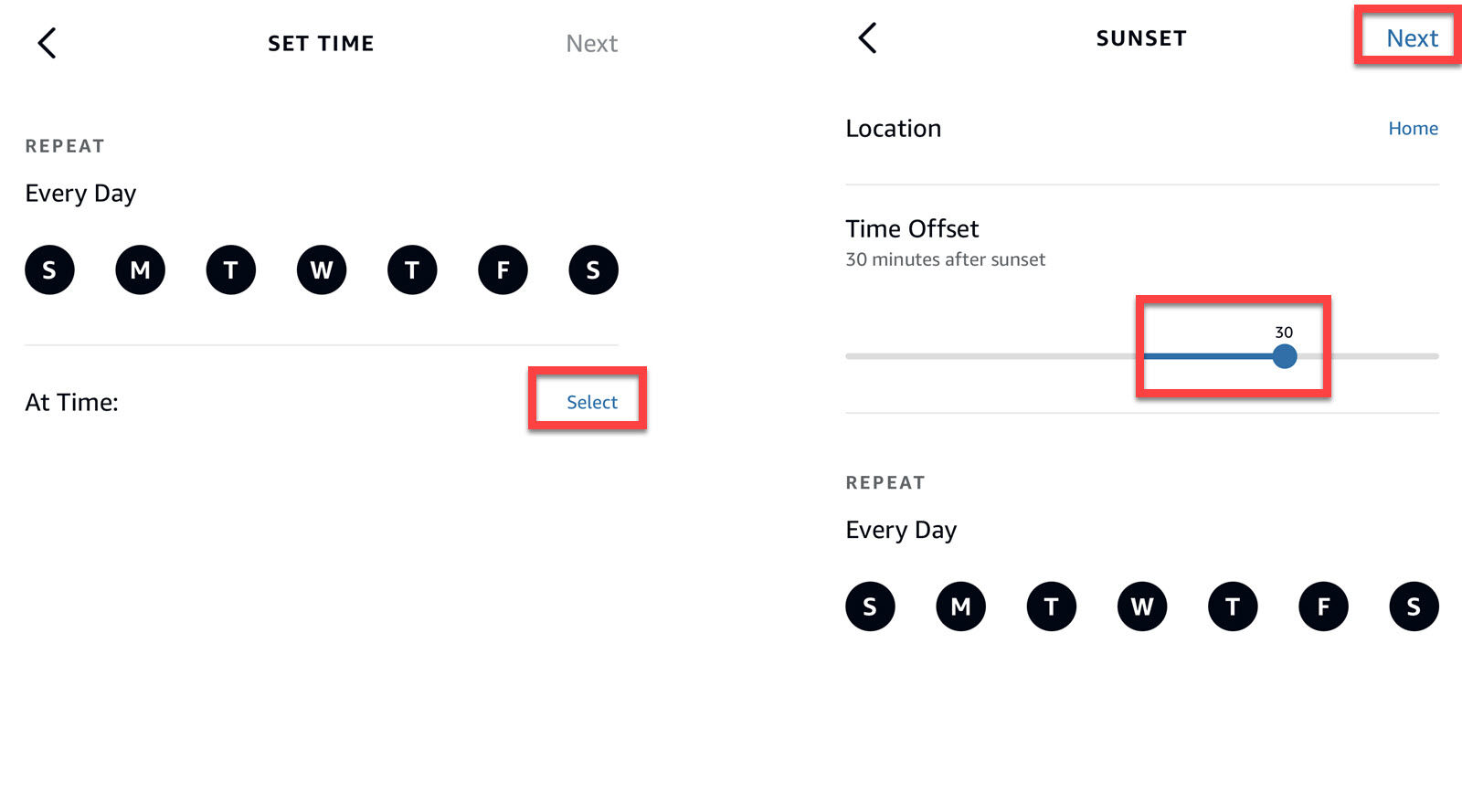 4. As before, deselect any days of the week that you don’t want the routine to run and tap Next.

5. Tap Add action and scroll down and tap Smart Home.

6. You can use any groups you’ve set up, but assuming you want to turn on a single lamp, tap All Devices and find your smart plug in the list.

7. Tap it, make sure Power is ticked and that the toggle switch is set to On. 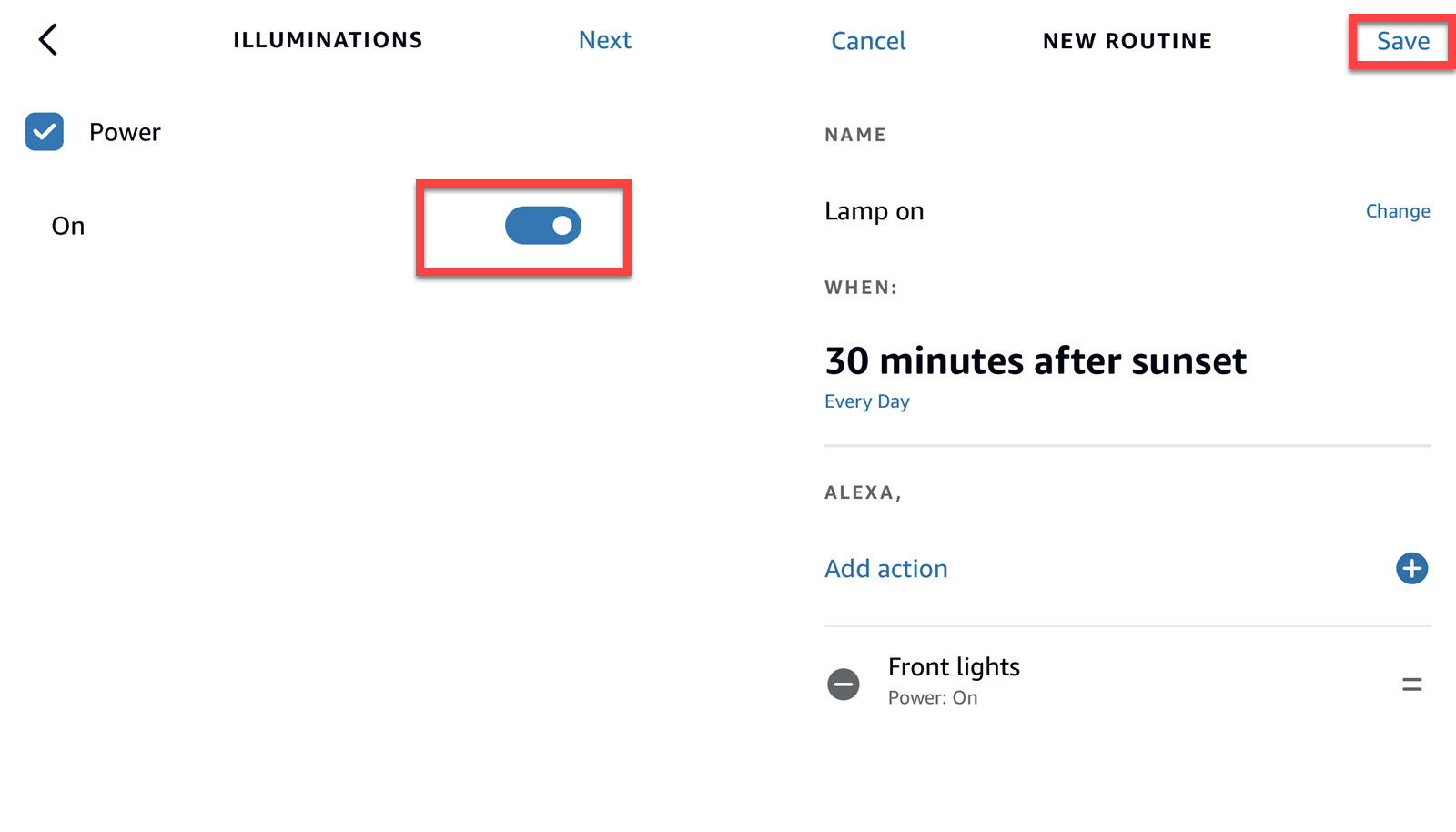 9. Now, you need to create the second routine to turn it off again. So use the same process as above, but call it “Lamp off” and instead of choosing Sunset, tap on ‘At Time’ and set the time you want it to turn off (10.30pm in our example). Remember to deselect the same days as for the ‘Lamp on routines’.

10. When you Add action, tap Smart Home, tap on your smart plug in the All Devices list, but this time tap the toggle switch to Off.

11. Tap Next and tap Save and you’re finished.

At 30 minutes after the next sunset, your lamp will turn on and remain on until 10.30pm when it will switch off.

Hopefully by now you can see how you could apply the same process to create routines for other useful automations, and they certainly become more valuable when you own more smart home devices.

If you have a door contact sensor that’s compatible with Alexa, for example, you could create a routine where Alexa tells you that the door is open when someone opens it.