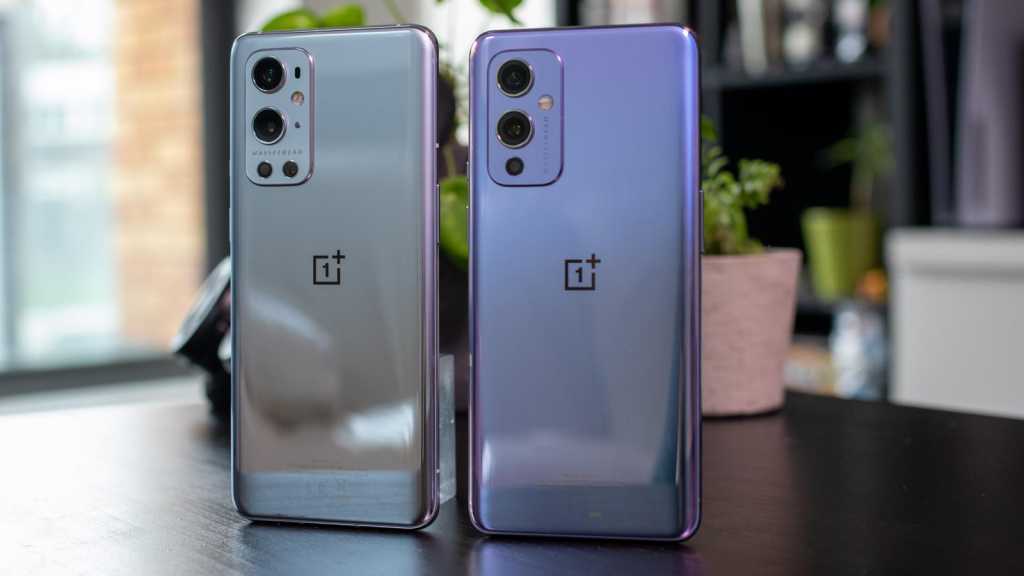 OnePlus likes to talk a lot about CMF – colours, material, finish – when it talks about new phones. It’s the design philosophy that’s seen the company explore every shade of blue and texture of glass it can find in the name of perfecting the look and feel of a phone.

Historically, OnePlus has nailed this. We’ve seen it in the sandstone finish that defined the OnePlus One to such an extent that the company still ships sandstone cases for other phones. It’s there in last year’s OnePlus Concept One, a tech showcase for colour-changing glass that can render camera lenses near-invisible. Even in the company’s recent flagships, the OnePlus 7 Pro remains a high watermark for Android flagship design, and one of my favourite phones ever made.

With the 9 series, OnePlus gets many things right – you can find out what in my review of the 9 Pro, or my colleague Chris’s take on the OnePlus 9 – but for the first time in years, CMF isn’t one of them.

I haven’t seen every finish in person – each phone comes in three different colours – but I have seen the two flagship finishes: Morning Mist on the 9 Pro, and Winter Mist on the 9.

Both are glossy, reflective glass designs with a slightly foggy gradient running from top to bottom – hence ‘mist’. Therein lies the first problem: reflective finishes attract fingerprints like nothing else, meaning your slick new phone almost immediately begins to smudge. 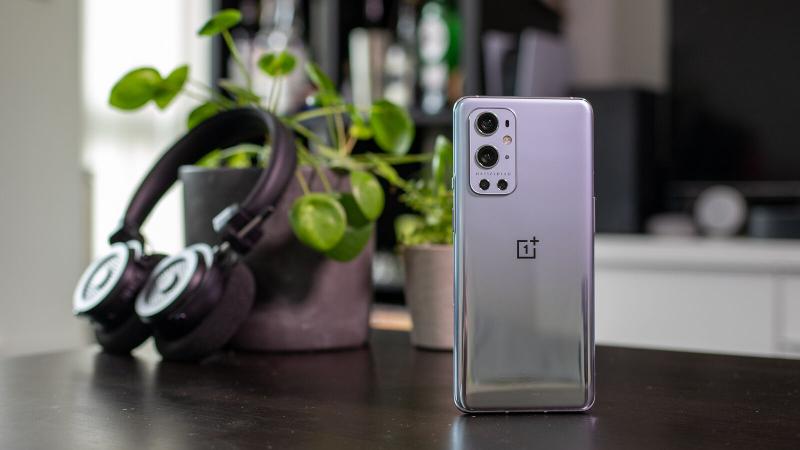 In the past, OnePlus has tended to prioritise matt and frosted finishes that more or less avoid that problem, but the mirrored finish here – not quite as reflective as the Oppo Find X3 Pro, but not far off – is as glossy as they get.

You’d think it might help that half the phone is misted, but it really only makes things worse. The smudgy fingerprint marks on the bottom half blend imperceptibly into the intentionally misted top half, so you can’t tell where one ends and the other begins. If you don’t polish the phone to within an inch of its life (typical for a photo shoot, not in day-to-day life) then the whole thing becomes a murky mess.

The standard OnePlus 9 fares better with its purple hues. It’s nowhere near as vibrant as the purple finishes that Samsung has begun playing with on the likes of the Galaxy Z Flip, but the subtle infusion of colour has its charms. 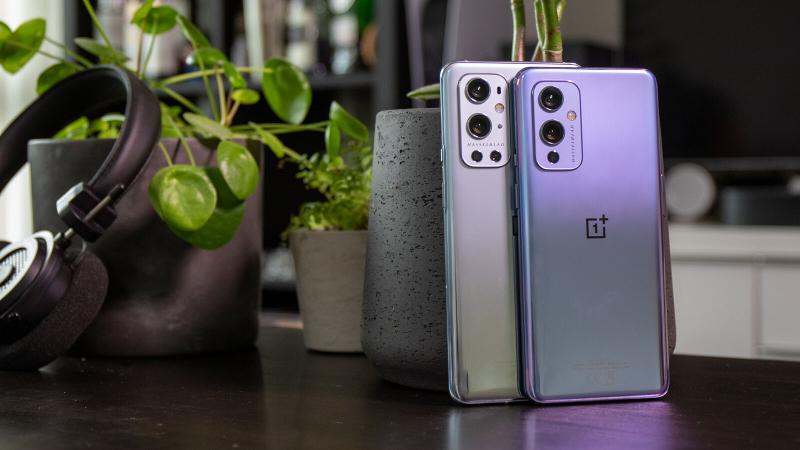 The 9 Pro’s Morning Mist, on the other hand, offers little more than the drab grey of a fogged up bathroom mirror. The initial impression is closer to a £200 budget phone than a flagship creeping up on a grand, which somewhat sullies the unboxing experience.

It’s not just how the phone looks, either. OnePlus has subtly textured its glass in the past to somehow, almost impossibly, make phones feel both smoother and grippier. It’s a subtle but crucial part of a phone’s hand-feel – something that last year I praised Chinese rival Vivo for also absolutely nailing.

The 9 and 9 Pro just feel like… glass. Regular old glass. Kinda slippy and glossy, but not especially pleasant to hold. Much like the drab grey, it’s a texture that I’m used to from more affordable phones, but not OnePlus’s latest and greatest. 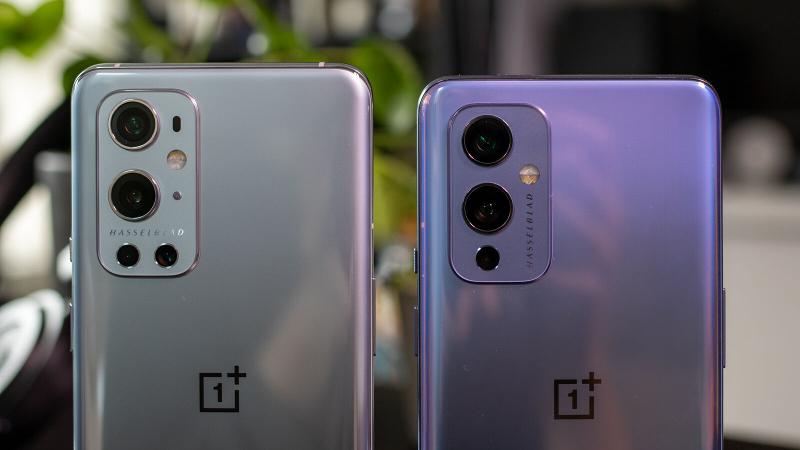 Case in point: setting them side by side, by feel alone it’s almost impossible to tell the 9 Pro apart from the OnePlus Nord – a phone that’s a year old and about half the price. That speaks well of the Nord – a phone that admittedly punches above its weight – but it’s worrying that OnePlus’s latest flagship shares more design language with the company’s budget line than its flagship forebears.

As I said, I’ve only seen the Mist finishes in person, and maybe they’re the duds. Going by photos the 9 Pro’s Pine Green model certainly looks more up my street, while the 9’s Arctic Sky is closer to the classic OnePlus blue we all know and love. But my Morning Mist 9 Pro is the first OnePlus phone that somehow looks better with a case on.

You might not even get the choice you want though, as OnePlus still stubbornly insists on locking RAM and storage configurations to specific finishes. Want the regular 9 with 12GB of RAM and 256GB storage? Well, if you’re in the UK then you better learn to love that purple, because that’s the only option you got. 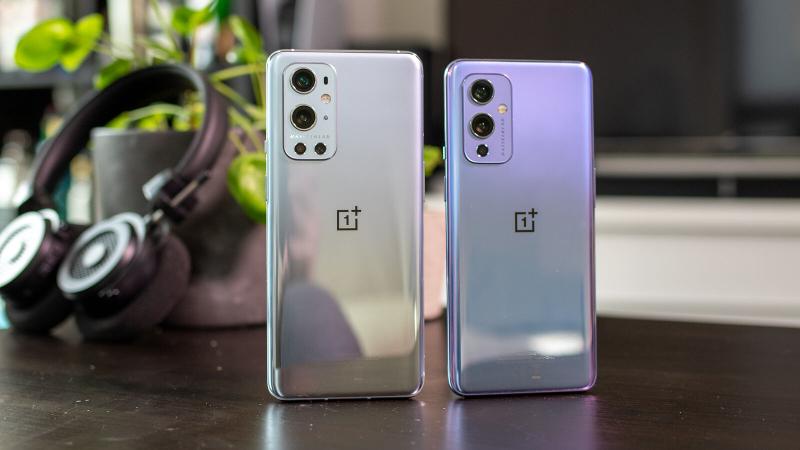 Of course, there’s nothing more subjective than taste, so don’t let my moaning put you off the phone if you love it. You’ll still get top specs, fast charging, and an improved camera experience – even if it isn’t quite the transformation some might have hoped for from Hasselblad.

Looking at the company’s recent trajectory, it’s hard not to feel a touch of concern that the distinctive OnePlus magic might be on the way out. Last year saw OnePlus merge its R&D departments with Oppo and release two budget Nord spin-offs that certainly appear to be re-branded Oppo phones, all before company co-founder Carl Pei departed to launch his new start-up Nothing.

Much ado was made in 2018 when Google quietly removed unofficial slogan ‘don’t be evil’ from its corporate code of conduct. At this rate, how long until ‘Never Settle’ shares its fate?