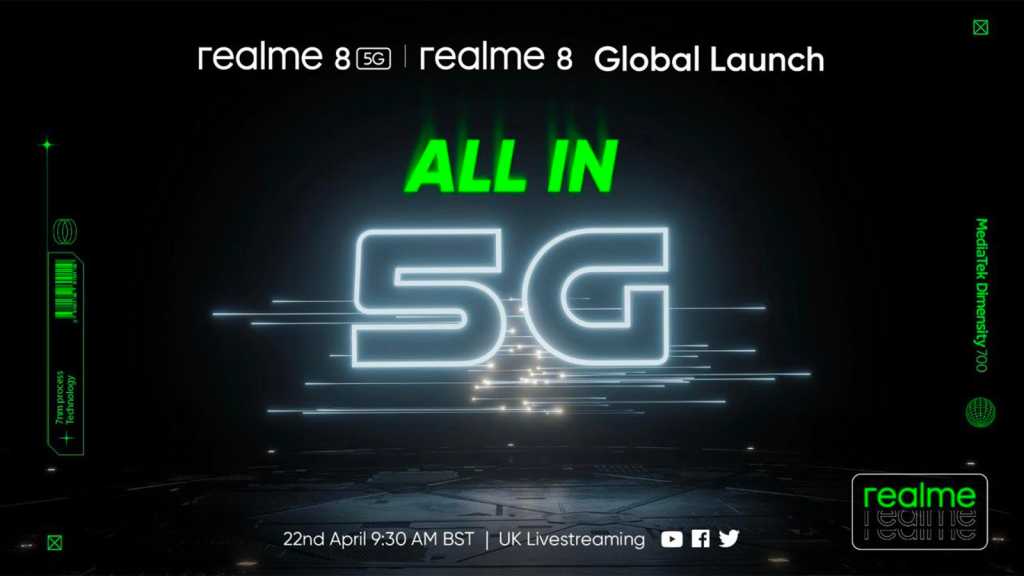 It’s hard to believe that Realme was first established as recently as 2018. The company has quickly made a name for itself in the ultra-competitive smartphone market, especially following its expansion into Western markets a year later.

Realme has released an incredible number of phones during the last three years, the most recent being the Realme 8 and Realme 8 Pro, and after a slight delay, now it’s the turn of the Realme 8 5G. Here’s all you need to know about the launch event.

When does the Realme 8 5G launch?

The Realme 8 5G hit pre-order in Thailand a day before its official launch, which took place on 22 April 2021.

The standard Realme 8 – which was already on sale in various markets, including India – also received European pricing and availability at the event.

How to rewatch the Realme 8 5G launch

Realme streamed the launch event on its official YouTube channel. We’ve embedded the stream above, if you want to watch it back.

What features does the Realme 8 5G have?

Despite not arriving in Europe until mid-May, we now have a complete picture of what it brings to the table, which reveals a notable shift from both its predecessor and the standard Realme 8.

Aside from its all-important 5G connectivity, the phone comes powered by MediaTek’s Dimensity 700 chipset (one of the first devices outside of the Chinese market to sport the chip), which doesn’t offer quite as much grunt as the Helio G95 or the Dimensity 800U respectively found in the Realme 8 (4G) and Realme 7 5G, overall.

It was thought ahead of launch that the Realme 8 5G may just be a repackaged version of the China-exclusive Realme V13 5G and based on the rest of the specs – aside from some subtle differences – that looks to be the case.